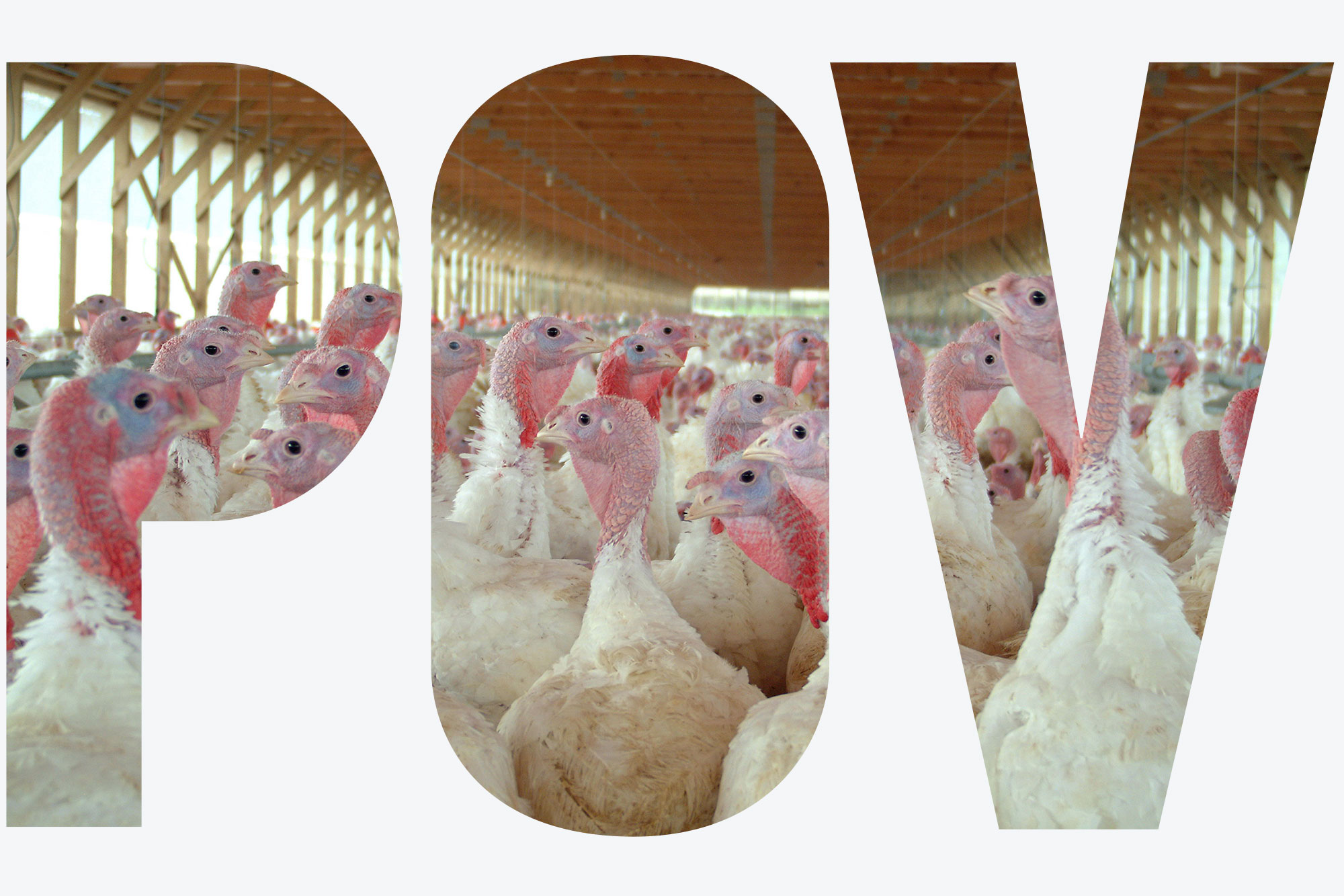 POV: This Thanksgiving, Think of the Turkeys

Factory farm birds suffer greatly before they are slaughtered

Editor’s note: If you love turkey, and have no plans to consider alternatives for Thanksgiving, be warned that this opinion piece includes some graphic details about how turkeys are treated.

Every Thanksgiving, more than 45 million turkeys are killed to be eaten in the United States. Unlike the turkeys we see roaming around the Boston suburbs, almost all (99.8 percent) of the turkeys killed to be eaten spend their entire lives in factory farms, never getting to know their mothers or feel the warmth of a nest.

They spend their days in a desolate, dark, dirty shed with thousands of other turkeys. Turkeys can live to be 10 years old, but are slaughtered at 14 to 18 weeks, about 2 percent of their natural life span. In these cramped places, you might imagine that turkeys would become aggressive and injure each other. To prevent turkey attacks on one another, their beaks and toes are cut off without anesthesia prior to going into the sheds.

Turkeys are bred and genetically manipulated to grow as large as possible in the shortest amount of time. Their muscular growth is not supported by concurrent growth in their skeletal and cardiovascular systems. As a result, many turkeys suffer greatly from heart and skeletal diseases and it is common for them to die from organ failure or heart attacks. Some turkeys can’t even stand up, spending much of their short lives lying down in the fecal matter of thousands of other turkeys, where they can then contract lesions and blisters.

The process of going to the slaughterhouse is equally brutal. After months of being confined in the dark, the turkeys get one glimmer of sunlight, when they are forced from the dark shed to a dark truck, where they wait their ultimate fate: death.

No matter if they die while being transported, from hypothermia or heart failure due to stress, or at the slaughterhouse, where they are killed, they ultimately suffer horribly. The process of killing a turkey is not without suffering: some are first put in an electric water bath to stun them before their throats are slit, but this method is far from perfect. Many are not stunned and flail violently while the blade that is supposed to kill them misses their necks. This means that turkeys enter the next phase of slaughter, a scalding tank to loosen their feathers, alive.

It’s not just turkeys that suffer. Many slaughterhouse workers also have to endure unsafe conditions and the negative mental health impact of rapidly killing so many animals. This year, conditions at these slaughterhouses have been worsened by the COVID-19 pandemic. Not only do employees need to work on fast-moving production lines in a cold and damp environment, where the virus thrives, but it is also difficult to physically distance. Additionally, many slaughterhouse workers are financially unable to take time off to isolate and recover from the coronavirus, leading to large outbreaks.

This Thanksgiving, think of the turkeys. Think of the cruelty and suffering they endure.

Luckily, there have been great strides in plant-based products, and there are many delicious turkey substitutes, easily found in supermarkets. Brands such as Tofurky, Gardein, Field Roast, and Quorn all have holiday roasts that can fill the role of the traditional turkey, with far less cruelty.

This year, think of the turkeys—and choose a plant-based option.

Try these recipes to go along with your meal:

POV: This Thanksgiving, Think of the Turkeys

There are 5 comments on POV: This Thanksgiving, Think of the Turkeys

POV: This Thanksgiving, Think of the Turkeys
5
share this