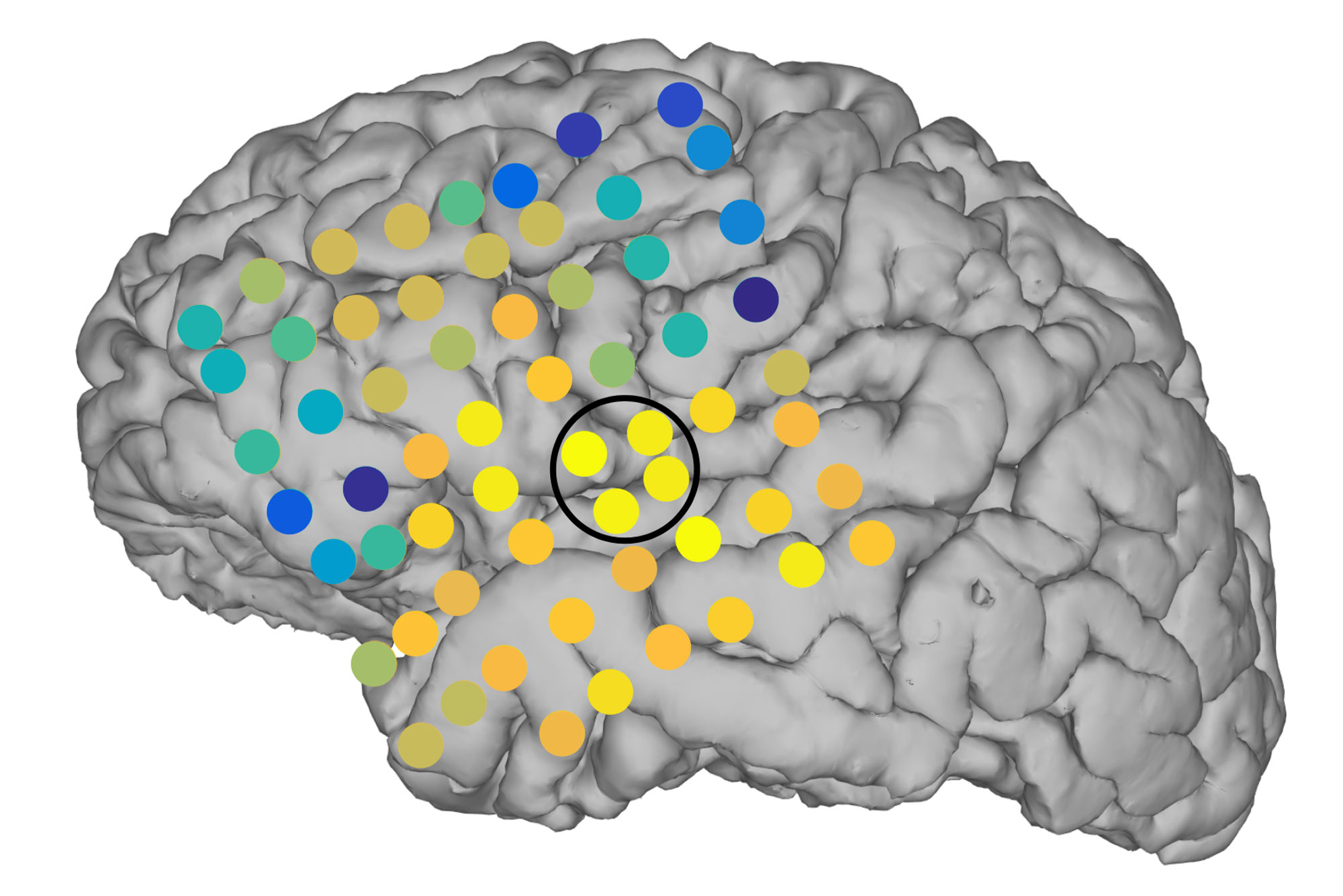 Using a network statistics approach, BU researchers have discovered how brain networks propagate and evolve leading up to and during seizures. The black circle here indicates an area of an individual’s brain most involved in neural network activity during a seizure. The method could help improve brain surgery to reduce seizures and improve quality of life for people with epilepsy. Credit: Martinet et al.

Epilepsy is one of the most common neurological disorders, affecting about three million people in the United States. Epileptic seizures, which can lead to serious falls and other injuries, can often be controlled by medication, but about one-third of people with epilepsy do not respond to medications. Those patients often seek relief with resection, a surgical procedure that removes the part of the brain where seizures begin to form.

It’s a radical—and century-old—procedure, but it works. Resection can greatly reduce the number of seizures a person experiences, and in some cases it can eliminate seizures completely. But the surgery is most successful when a surgeon can first pinpoint the exact spot in the brain where seizures begin, a challenging feat that has not yet been perfected in the clinic. New research from Boston University neuroscientists and statisticians could someday improve the success of resections, and therefore, the quality of life for people with epilepsy.

“One way to think about a seizure is like a forest fire,” says Mark Kramer, a BU College of Arts & Sciences professor of mathematical neuroscience and the associate director of BU’s Center for Systems Neuroscience. Kramer has been studying the dynamics of seizures for over 15 years. “If you can catch a forest fire before it spreads, you have a better chance of putting it out.”

He says that there is one hitch with the forest fire analogy: unlike fires, which burn on Earth’s surface, seizures evolve within the extraordinarily complicated and three-dimensional network of the brain’s cells and tissues—the slightest nuances of change within that network can lead to sudden explosions or reductions in seizure spread.

That’s why, 14 years ago, Kramer reached out to Eric Kolaczyk for help. Kolaczyk, a College of Arts & Sciences professor of mathematics and statistics, has long been considered one the world’s authorities on the statistical analysis of networks, and more recently, has been named the director of BU’s Rafik B. Hariri Institute for Computing and Computational Science & Engineering. Kramer hoped that Kolaczyk’s expertise could help them understand, in both space and time, the seizure process as it exploded across the brain’s network of tissue.

“In the brain, different areas activate in healthy ways all the time,” says Kramer, who has also partnered with clinicians Catherine Chu and Sydney Cash at Massachusetts General Hospital. “When a seizure occurs, many brain areas link together very quickly. We wanted to understand that process.”

To plan for resection, a clinical team first opens a patient’s skull and places a grid with up to 80 electrodes directly on the brain’s surface. But instead of considering the brain activity each electrode detects as a separate data point, “one way of approaching this is to create a network representation that tells you…it’s really 80 different parts of the brain working together,” Kolaczyk says.

Being able to represent the brain’s collective behavior is a big step forward, but clinicians have still been left with the challenge of correctly interpreting that network representation as an evolving biological system. “With epilepsy,” Kolaczyk says, “it’s especially important to understand how the network evolves over time.”

For that interpretation, Kolaczyk and Kramer worked with Louis-Emmanuel Martinet, a BU postdoctoral fellow studying spatial memory, and BU graduate students Weston Viles, Elizabeth Spencer, and Nathan Perkins. Together, the team came up with a new way to analyze the brain activity data gathered by the electrodes. They developed an algorithm that finds patterns of connectivity in these brain networks that can be traced as they evolve through time before, during, and after a seizure. The new approach is described in a paper recently published in Nature Communications.

“We came up with a methodology that helped us extract what we call ‘dynamic communities’ from these data,” says Kolaczyk. “This in turn allows us to visualize and analyze how these networks change over time. Epilepsy has traditionally been thought of as an event where the brain locks up and all the regions are working together. We found that there is a more nuanced process.”

That’s important, he says, because it suggests a greater level of complexity in the mechanisms underlying epilepsy than previously thought. And a far more difficult task for researchers trying to pinpoint its exact origin in the brain.

“It’s like trying to map a complex system of tunnels which narrow and widen, join and split, and so on,” he says. “At the same time, the lighting is poor, so the visual input that you’re using to map is imperfect. And lastly, the tunnels are just really long and really complex, so that simple preconceptions of how tunnel systems might look are likely to lead you astray.”

Using their algorithmic approach, Kolaczyk and his team essentially mimic the act of walking through tunnels to produce maps, doing so in a way that is statistically robust and computationally efficient.

“Given that some error is inevitable in our construction of networks from the original brain time series, and that we can be dealing with sequences of as many as 80,000 networks over a 24-hour period in one patient, it’s important to get both the statistical and the computational elements right,” says Kolaczyk. “Getting it right means that the resulting ‘maps’ have far greater clarity than current standard approaches.”

The new methodology enabled the computational neuroscientists on the team—Martinet, Spencer, Perkins, and Kramer—to get a more accurate read of noisy data from a patient’s brain activity. The combined team of statistical, computational, and clinical researchers can then interpret the results. Kolaczyk says the interdisciplinary approach, with each team of collaborators providing unique expertise, is what made this research possible.

“The network science expertise allowed the team to make precise the vague notion of brain connectivity evolving over time,” he says. “Meanwhile the statistics [expertise] was important for accurately constructing the network representations from the raw data. The clinical expertise was necessary both in obtaining the data and interpreting the results. The computational neuroscientists were the critical bridge, linking the statistics and networks [expertise] with the clinical.”

The research, conducted with support from the National Institutes of Health, has the potential to do two things: “One is to hypothesize about how the epileptic seizure is generated and progresses,” says Kolaczyk. “The other is to take the metrics that we extract from the data and compare them against therapeutic interventions and outcomes that represent our current best medical efforts, and see in what ways they are suggestive.”

The current results, for example, suggest that patients with fewer, shorter-lasting dynamic communities during seizure (for example, fewer tunnels of shorter length) have improved surgical outcomes. The researchers believe that if they can track the seizure back to the point where it ignites, it may be possible to extinguish the seizure before it ever has the opportunity to spread.

This work was supported by the National Institute of Neurological Disorders and Stroke.

Data Science Is Helping to Explain Epileptic Seizures
2
share this