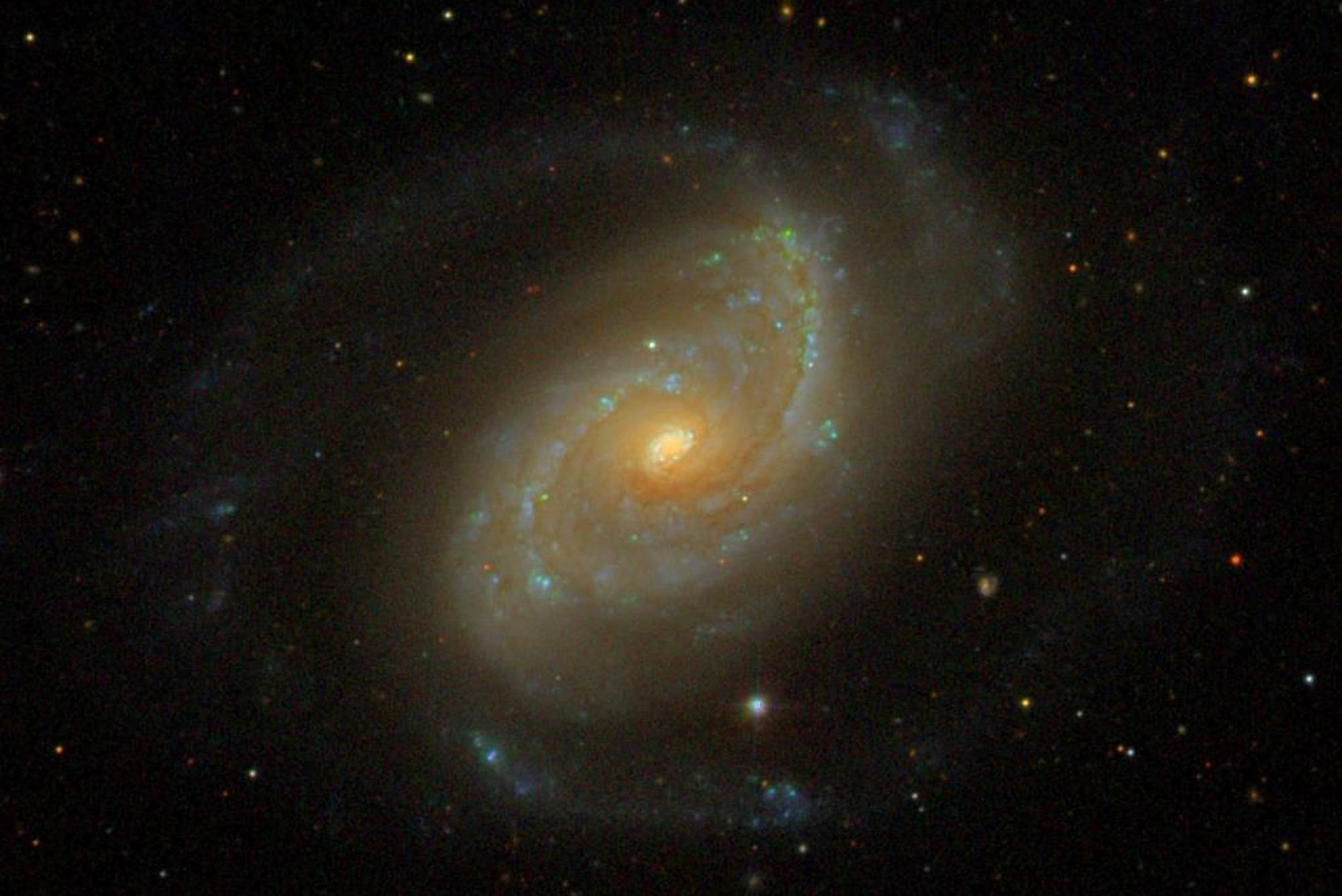 Researchers from BU’s department of astronomy have found that large blue galaxies like this one are surrounded by a lopsided array of smaller satellite galaxies orbiting them. The findings could have implications for our understanding of dark matter. Credit: Sloan Digital Sky Survey

If, while standing in the Southern Hemisphere, you were to look up into a clear night sky, Boston University astronomer Tereasa Brainerd says you might be able to make out two bright spots in the sky that make up the Magellanic Clouds. Except they’re not clouds at all; they are two small galaxies orbiting our own, larger Milky Way galaxy. By the naked eye, the Magellanic Clouds are the easiest to see of nearly 70 satellite galaxies caught in the gravitational tow of the Milky Way.

Throughout the universe, satellite galaxies orbit around host galaxies, and scientists like Brainerd, who has been studying these cosmic systems for years, currently suspect that the satellites are likely located inside halos of dark matter that extend beyond the perimeter of host galaxies. But since dark matter isn’t visible, the idea has so far remained unproven as one aspect of what scientists call the “cold dark matter theory.”

Brainerd says models of the cold dark matter theory do an excellent job of reproducing the observations that we see when we look out into the universe. The theory hinges on the idea that most of the universe is made up of fundamental particles, called weakly interacting massive particles (WIMPs) or axions, and that the presence of these particles explains why some cosmic bodies have been observed moving at extremely high speeds that seem to defy our understanding of gravity.

“There is a great deal of observational evidence that points toward one of two things: either Newton’s law of gravity is wrong or there has to be a lot of dark matter in the universe,” says Brainerd, a BU College of Arts & Sciences associate professor of astronomy, who uses observational and theoretical data to research dark matter structures throughout the universe.

Now, she’s teamed up with BU astronomy graduate researcher Adam Samuels on a mission to use satellite galaxies to reveal new insights into the whereabouts of dark matter. “If you want to figure out the shapes of the dark matter halos surrounding large, bright galaxies, you need to look at something that’s actually visible and that could also trace the shapes of the halos,” Brainerd says. Satellite galaxies, they thought, are just the ticket.

They set out to examine large, bright host galaxies that are isolated—meaning they don’t have any other similarly large and bright galaxies anywhere nearby. In analyzing a catalog of images of nearby isolated host galaxies, available through the NASA-Sloan Atlas of imaging from the Sloan Digital Sky Survey, Brainerd and Samuels were surprised to find a significant number of them surrounded by lopsided distributions of satellite galaxies. The researchers have reported their findings in a paper under review by Astrophysical Journal Letters.

Blue galaxies are so called because they give off light within the blue visible spectrum, the color of light coming from very young stars less than two million years old, Brainerd says. “Any galaxy that is blue is actively making stars,” she says. Large blue galaxies are primarily spiral galaxies with many arms, like our own Milky Way. “If you could look back at the Milky Way, you would see it is yellowish in the center, surrounded by a blue disc and spiral arms, where it is actively forming stars.”

In contrast, galaxies giving off red light are, in an astronomer’s lay terms, dead.

“A galaxy that appears red to us is one that has little to no gas left—it cannot make any new stars,” Brainerd says. “It would have had gas in the past, and it would have been bluer had we been able to see it in the past history of the universe. Unless a galaxy can replenish its gas, it becomes redder and redder.” Red, or “dead,” galaxies are typically elliptical in shape.

Lighting the way to new questions

“These lopsided distributions of satellite galaxies might mean we are seeing relatively young galaxies, recent arrivals that have not yet orbited around their primary host galaxies [and stabilized their orbit],” Brainerd says.

“Satellite galaxies may not be accurate tracers of dark matter halos in cases where they have recently joined the host-satellite system and have not yet come to equilibrium,” Samuels agrees. “This may be what we are seeing in the case of the satellites of young, blue host galaxies. Another possibility is that a group of satellites may be orbiting the host in coordination with one another, like a group of planets orbiting a star,” he adds.

It could also mean that dark matter halos are irregularly shaped, which would explain why satellite galaxies appear to be so unevenly distributed around their hosts.

The findings are now prompting the team to ask new questions about how dark matter is distributed throughout the universe and how galaxies are positioned within the dark cosmic web. To investigate further, Brainerd and Samuels are seeking National Science Foundation funding to find more systems of host and satellite galaxies for observation and analysis using the Lowell Discovery Telescope in northern Arizona, in which BU is a capital partner. The team also plans to use a simulation of galaxy formations, called the IllustrisTNG, to examine the influence of cold dark matter on the distribution of satellite galaxies.

“A simulation is a great tool because it not only allows us to compare our observations to theoretical predictions, but also enables us to see the dark matter directly, so we really get a sense of the big picture,” Samuels says.

“It’s one of the very best, most realistic simulations of the formations of galaxies,” Brainerd says. “It was put together by researchers primarily at MIT, Harvard, and the Max Planck Institute for Astrophysics. The IllustrisTNG is the perfect simulation for us to use, and we should be able to do that as soon as this summer.”

There is 1 comment on Could the Distribution of Galaxies Reveal the Universe’s Invisible Web of Dark Matter?

Could the Distribution of Galaxies Reveal the Universe’s Invisible Web of Dark Matter?
1
share this