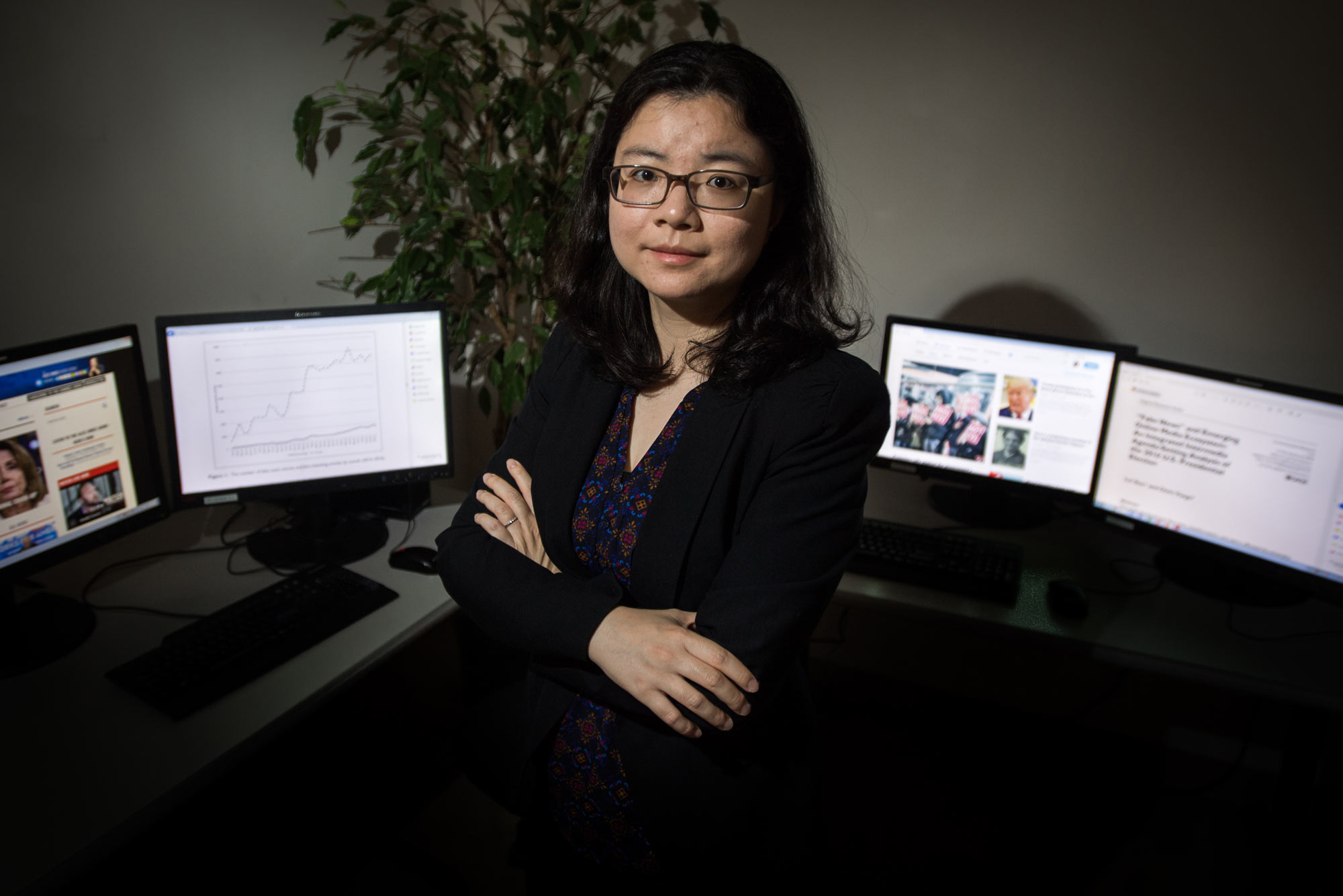 Lei Guo, BU College of Communication assistant professor in emerging media studies, is one of the lead researchers on a BU team examining international media coverage of the coronavirus pandemic. Photo by Cydney Scott

The novel coronavirus that has now sickened more than 9.4 million people worldwide, and killed over 487,000, has been the major focal point of the news for most of 2020. But what aspects of the pandemic have received the most media attention, and where? Margrit Betke and Lei Guo, Boston University researchers developing machine learning algorithms for interpreting international media coverage, have joined forces to create data visualizations of how journalists around the world have reported on various facets of the pandemic.

“COVID-19 is a public health crisis on a global scale,” says Guo, BU College of Communication assistant professor in emerging media studies. “It serves as an ideal case study for communication researchers to examine how different countries around the world report the same issue and how the reporting reflects each country’s cultural and political context.”

Using machine learning strategies Betke and Guo developed alongside collaborators in the  Artificial Intelligence & Emerging Media (AIEM) research group they co-lead at BU, the duo has been tracking COVID-19-related news in four countries that have played a major role in the coronavirus pandemic—China, South Korea, the United States, and the United Kingdom—to shed light on how widely circulated media outlets in different countries are responding to and framing the global health crisis.

Their goal for now is to provide a tool that enables people to inform themselves about the topics the media focused on in the different countries at different periods. Later, they plan to analyze how differences in culture, press freedom, and government communication impacted a country’s ability to squash the pandemic. The researchers are sharing their data and analysis of international COVID-19 news coverage online.

Leveraging a text analysis method known as unsupervised machine learning, their algorithm retrieves news stories from around the world and analyzes headlines and lead paragraphs to identify the 10 main news topics in each country during a given week. From those 10 topics, the algorithm then links each one with a list of 20 associated terms, which are also reviewed by Guo, Betke, and the rest of their AIEM team. The team attributes labels to each set of terms, such as “government responses and actions” or “frontline healthcare,” and calculates the proportion of news coverage focusing on each topic, which gets reported in their graphics.

“Our dynamic data visualizations are surprisingly powerful and they reveal the emergence, prevalence, or lack of discussion of certain topics in certain countries during certain periods of the pandemic,” says Betke, BU College of Arts & Sciences professor of computer science. The project particularly hits home for Betke, who overcame an infection with the novel coronavirus soon after it first began spreading in the United States.

Before the project was off the ground, Betke faced the impacts of the coronavirus pandemic herself, along with her husband. After returning from a computer vision conference in San Diego, Calif., where she was in contact with numerous scientists from all over the world—including some researchers from Northern Italy, where the outbreak had already begun—she felt symptoms that closely matched those of the coronavirus. So, on March 5, just five days before BU’s spring break, Betke began self-isolating and started teaching her class on artificial intelligence remotely, likely making it one of the first classes at BU to move online as a result of the pandemic. Even though Betke felt all the signs of a respiratory infection, and experienced other alarming symptoms, she did not qualify for a COVID-19 test since she had not traveled to a foreign country. At that point in time, testing for COVID-19 was not widely available in Massachusetts, and eligibility was based on a narrow list of requirements. Her doctor instead tested her for influenza A and B, and a few other viruses. All the tests came back negative. But when her husband also fell sick, Betke began to worry.

Guo, who since late 2019 had been closely following the Chinese news coverage of the COVID-19 outbreak, suggested that Betke and her husband consider the real possibility that they may have contracted the novel coronavirus. Following Guo’s advice, they bought an oximeter to monitor their oxygen levels during bouts of shortness of breath, providing them with peace of mind when their breathing felt particularly difficult. Betke’s breathing issues lasted for about five weeks. It took two months before she started to feel back to normal.

“During my slow recovery, I [was] anxious to contribute to the COVID response with my AI expertise,” says Betke. “It is important to analyze the differences between public discourse in different countries. We can learn from each other, as an informed global citizenry, [which] is vital to combatting the virus.”

Since recovering, Betke has been working closely with Guo to monitor worldwide news about the crisis with their artificial intelligence system, paying especially close attention to the framing of the news—meaning, the angle a reporter takes. Guo says more analysis is needed before drawing definitive conclusions from their current datasets, which they will be expanding in the coming weeks and months, but potential findings have already begun to emerge.

For instance, their algorithm has confirmed that at the start of the outbreak, between January and early March, global media attention was largely focused on the virus’s spread in China.

Guo says data also suggests that, initially, news stories in China, South Korea, the United States, and the United Kingdom were framed around scientific research, frontline healthcare workers, and the domestic and global outbreaks. But soon, according to their data, Guo and Betke saw the media’s focus, in all four countries, shift to domestic and international economic consequences and financial fallout—a topic that has largely remained a focus in most of the countries they analyzed.

Their data has also revealed that news stories about how to take personal preventive actions, like social distancing and adhering to stay-at-home orders, have consistently been a topical focus of news outlets in the US.

“This is a very controversial topic here in US coverage,” says Guo, referring to stay-at-home orders that have drawn protesters in states including Michigan, Georgia, Massachusetts, and others. “This could be because American culture values individual freedom, combined with a decentralized government, possibly making mandatory preventive actions harder to implement here.”

During the week of May 10 to May 16, for example, the top three new subjects in American media coverage of the pandemic were “personal preventive actions,” taking up 19 percent of the news, closely followed by “domestic economic consequences,” and “government responses and actions.”

Personal preventive action also took up 19 percent of news coverage during that same week in the UK. Meanwhile, South Korean news emphasized the importance of using masks, but veered away from reporting on social distancing or other personal preventive actions that were the centerpieces of the recommendations from the US Centers for Disease Control and Prevention. In mainstream media in China, which is controlled by the Chinese government, news reports on how individual actions can fight the pandemic have been significantly lower in number compared to news about how government action has helped control the virus’s spread.

Betke and Guo will soon start to include data from additional countries and regions impacted by the COVID-19 pandemic, including Germany and Egypt, with the help of artificially intelligent language-translation software developed by BU computer scientist, Derry Wijaya, an expert on automated cross-lingual text processing and another principal investigator of the AIEM research group.

“Examining the correlation between news coverage of COVID-19 and the actual confirmed cases and deaths will shed light on the role the news media [has played] in this global pandemic,” says Guo.

Guo says the data could reveal best practices for news organizations and journalists to bring adequate awareness to future public health crises. Did framing stories around government advisories, economic consequences, or the extent of the global COVID-19 outbreak raise the most public awareness of the pandemic, thus reducing the infection rate?

“News media can influence public opinion and even behavior, and previous research has found an association between news media reporting and health-related consequences,” Guo says.

This work is supported by the National Science Foundation.