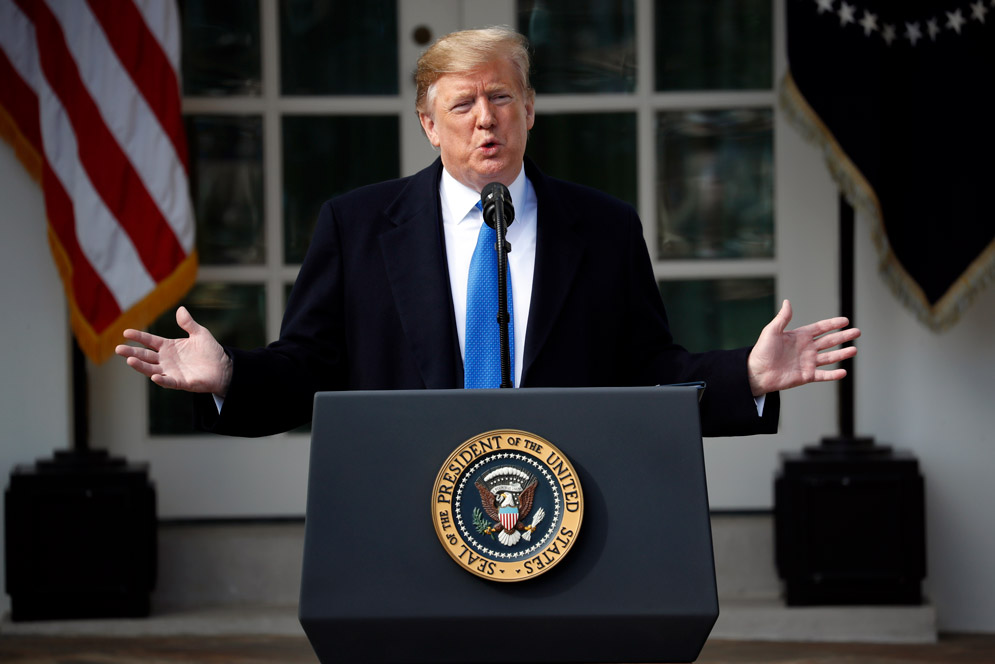 Having been rebuffed by Congress in his effort to secure $5.7 billion to build 234 miles of wall along the US/Mexico border, President Trump Friday invoked criminal immigrants and illicit drugs, which he said flow over the border, to declare a national emergency, allowing him to divert billions earmarked for military construction projects, counternarcotics programs, and other funds to build his wall.

The deal to keep the government open Trump signed almost simultaneously with the declaration of emergency included only one-fourth of the barrier funding he’d demanded to fulfill his signature campaign promise.

Presidents have long declared emergencies (the Civil War and Great Depression among them). Since 1976, when Congress sought to regulate such declarations by passing the National Emergencies Act, presidents have designated more than 58 emergencies, most of them in response to foreign crises, such as when President George W. Bush signed an executive order after the 9/11 attacks empowering the president to reroute military construction money.

Critics have challenged Trump’s declaration on policy grounds, saying the bulk of illegal drugs come through legal ports of entry, and that illegal immigrants commit less crime than native-born Americans. But they also make a legal argument: that Trump is doing an end run around Congress’ stated opposition to funding such a wall, violating the Constitution’s language giving legislators control over appropriations.

The American Civil Liberties Union and the state of California are among those saying they’ll challenge the president’s emergency declaration in court. And Democratic congressional leaders have vowed to introduce legislation to block the president’s plan.

BU Today: By what authority can a president declare a national emergency? Are there any limits on that power?

Sloane: The Constitution ordinarily prohibits the president from repurposing money appropriated by Congress for other purposes. Congress has not appropriated money for President Trump’s desired wall; to the contrary, a bipartisan majority of the House and Senate opposes it.

Perhaps the most famous national security law precedent, and one with special relevance here, is the 1952 Supreme Court case Youngstown Sheet & Tube Co. v. Sawyer: the Steel Seizure Case suggests that absent a statute, the president’s declaration would be unconstitutional. The Supreme Court held that President Truman lacked wartime authority to enjoin a strike he said would be necessary for the safety of our troops during the Korean War. The idea that President Trump has the constitutional authority to redeploy military funds to build a border wall during peacetime, absent a national security crisis (still less one endangering the troops), is implausible, and it should be risible.

It’s not implausible only because Congress enacted the National Emergencies Act. It sought to specify the circumstances under which emergencies could be declared. Ironically, the Congress that enacted it intended to limit, not expand, the authority of the executive branch to declare national emergencies. On its face, the act nonetheless authorizes the president’s action. Nothing in it clearly prohibits Trump’s unilaterally declaring a national emergency, and once the act’s been invoked, repurposing funds from other congressional appropriations to fund a border wall by dint of certain statutes that the National Emergencies Act activates.

What does declaring an emergency empower him to do?

It allows the president to terminate and defer civil works projects “he deems not essential to the national defense,” and to redeploy the resulting funds in order “to construct,” among other things, “civil defense projects that are essential to the national defense.” Under a distinct provision, the president, “without regard to any other provision of law,” may repurpose funds for military construction projects, which, while not authorized by Congress, he deems “necessary to support such use of the armed forces.”

What precedents are there for presidential emergency declarations?

To my knowledge, no president has ever tried to use national emergency funding to appropriate funds Congress refused to appropriate. Politically, it would mean the president would be seeking, as President Trump would indeed be doing here if he vetoes a proposed Congressional resolution disapproving the emergency declaration, to override a bipartisan judgment of Congress. If Congress has the votes to override, his authority terminates—as it would have, and had been intended to, with only a simple majority of each house. But a Supreme Court decision in 1983 invalidated such so-called legislative vetoes.

If Congress lacks the numbers to override—and it’s doubtful that enough Republicans would defect to enable a two-thirds majority in the House and Senate—the president would be proceeding in the face of congressional opposition, which, in turn, effectively weakens his position before the courts.

Legally, the courts will be faced with a host of questions. Two among them strike me as paramount: First, what is an emergency? The act does not define it. Second, however a federal court decides that question, what degree of deference should the judiciary give the president’s determination that a national emergency exists? Past emergencies include events on the order of the attacks of 9/11 and the Persian Gulf wars. There is no national security emergency that approaches that level of crisis at the US-Mexico border, only a humanitarian one.

In my view, the courts will be abdicating their constitutional responsibility if they decide an emergency means, as the Lewis Carroll cliché has it, what “[the president] choose[s] it to mean—neither more nor less.” Equally, let’s hope we have not reached a time when the legal question is, as Carroll’s Humpty Dumpty goes on to say, “which is to be master—that’s all.”

Could a declaration be challenged?

Apart from challenges based on the definition of “emergency” and the degree of deference owed the president, challenges will likely be brought based on the particular language of the statutes. The repurposed funds must be drawn from appropriated “military construction projects…necessary to support [the] use of the armed forces.” It’s questionable whether the wall qualifies in this regard, and it’s especially troubling that the statute singles out “funds appropriate for [military] family housing,” because the past week witnessed scathing reports on the substandard military housing that exists and the lack of funds to improve it.

It’s also dubious that the proposed emergency justification for repurposing funding for the wall can be deemed either to “require use of the armed forces” or to be “essential to the national defense.”

Some legal experts say declaring an emergency could undermine Americans’ faith in the constitutional system, as the president would be doing an end run around Congress on a funding dispute. Do you share that worry?

Very much so. I see the country’s democratic norms and institutions gradually, but at this point inexorably, eroding. Congress’ abdication of its constitutional responsibilities has, if not caused, been an indispensable enabler of that development in the past half century. Since relinquishing its authority to declare war during the Truman administration, in the past half century Congress has progressively sought to delegate more and more of its enumerated power to the executive branch. Far more recent examples of the erosion of US democratic norms that leap to mind include the use of the debt ceiling and government shutdown brinkmanship to extort policy goals outside the constitutional process, and the refusal of the Senate to fulfill its constitutional duty to advise and consent to a duly nominated candidate to the Supreme Court. Some argue that it was technically legal. True, but it’s also technically legal to use threats not to authorize raising the debt ceiling, government shutdown brinksmanship, and now, perhaps, declarations of faux national emergencies, in an effort to get one’s way outside the ordinary political and legal processes. The problem, of course, is that it gradually erodes the shared norms that sustain our constitutional democracy. Learned Hand’s well-known quotation is prophetic in this regard. “I often wonder,” he said, “whether we do not rest our hopes too much upon constitutions, upon laws and upon courts. These are false hopes; believe me, these are false hopes. Liberty lies in the hearts of men and women; when it dies there, no constitution, no law, no court can save it…”

Is Trump’s Declaration of a National Emergency Constitutional?

There are 8 comments on Is Trump’s Declaration of a National Emergency Constitutional?

Is Trump’s Declaration of a National Emergency Constitutional?
8
share this