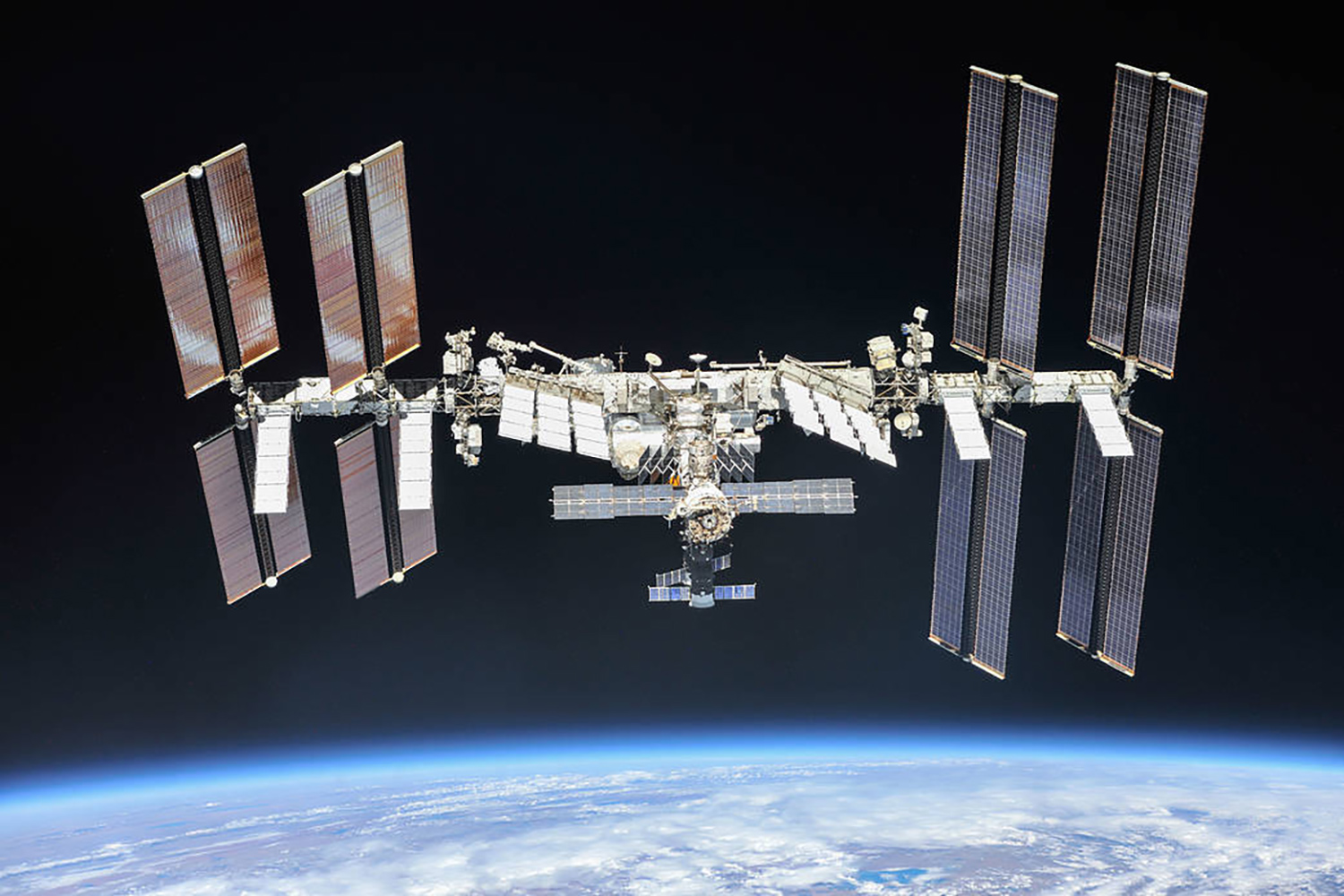 The International Space Station photographed by Expedition 56 crew members from a Soyuz spacecraft after undocking. Photo courtesy of NASA/Roscosmos

At one of the exhibits at the Smithsonian National Air and Space Museum in Washington, D.C., you’ll find a bit of surprising space trivia. Of all the physical sciences, which include astronomy and physics, chemistry is the only type of study that humans haven’t yet conducted in space. Until now, the risk of performing chemical reactions in microgravity has simply been too great. (Just imagine an explosive chemical reaction expanding wildly without Earth’s gravitational forces providing any friction to help slow it down.)

But soon, that’s all about to change—chemistry will finally make its way to the “final frontier” thanks to researchers in a Boston University chemistry lab. A group led by Aaron Beeler, a BU College of Arts & Sciences associate professor of chemistry, is building a special module from scratch that will carry out chemical reactions inside a closed-loop system, enabling it to be safely operated by astronauts on the International Space Station. Members of Beeler’s lab are calling it a new platform for chemistry experiments, meaning that scientists can use it to conduct a broad range of different chemical reactions.

“Carrying out useful chemical reactions in a microgravity environment…it’s never been done before,” says Beeler. “Are there going to be different behaviors? Will less gravity influence the reactions? These are the big-picture questions that we’ll finally be able to answer.”

Performing chemical reactions in space isn’t just important for the fundamental sake of learning how the conditions and physical properties of space alter chemical behaviors. In fact, the idea of how to safely perform chemistry reactions in space has become somewhat of a hot topic for space scientists. (As anyone who saw Matt Damon in The Martian knows, having science experiments go awry in space would be catastrophic.)

“The last American Chemical Society meeting was [earlier this year], and NASA held an entire session around the topic of chemistry in space,” says Beeler, who is also a core faculty member in the BU Center for Molecular Discovery.

He says a big reason for that is because the ability to safely produce compounds on demand (like lifesaving drugs, for example) in space could play a critical role in enabling humans to someday sustain long-term spaceflight to a planet like Mars, which experts estimate could take around nine months to get to.

Thinking about long-term space travel, if you could perform chemical reactions that were activated by light, then you could carry less reagents in your cargo.

To bring their chemistry platform to space, Beeler’s lab is collaborating with Space Tango, a company that currently supplies the ISS with experimental modules used by scientists in orbit. The Beeler lab’s new module will house technology known as “continuous flow chemistry,” a method that uses limited amounts of materials, called reagents, to rapidly produce small-scale reactions. Continuous flow chemistry has already been used on Earth for decades, mainly in the chemical industry but more recently in the pharmaceutical industry, as well. Taking the approach to space could potentially open up a whole new economic sector where products are synthesized in orbit, 250 miles above Earth.

“We’re excited to work with leading experts from [Beeler’s lab] to expand flow chemistry capabilities on the ISS,” said Space Tango CEO Twyman Clements, according to a recent Space Tango press release. “We envision that the automated, modular systems we are developing for flow chemistry will be a pivotal step toward further establishing new commercial opportunities in low-Earth orbit that benefit life on Earth and address a variety of additional on-orbit applications.”

Beeler says his team is setting up the platform for an initial test run of three different kinds of chemical reactions. The first one will be a photochemical reaction, which Beeler says is an area of special expertise for his lab and could be an especially advantageous method for space travelers.

“Thinking about long-term space travel, if you could perform chemical reactions that were activated by light, then you could carry less reagents in your cargo,” Beeler says.

The group is also planning to test a thermal reaction, which Beeler says will show just how high temperatures will be able to get inside the module’s isolated, closed-loop environment. “We’re not sure what the safe operating temperature of reactions will be in space, but we’re doing preliminary experiments before launch to make sure we can isolate the heat.”

Finally, the group is planning to test out a peptide-coupling reaction in space, a type of reaction used by chemists and biologists to create and modify proteins and other building blocks of life.

Beeler says they are working fast to get the system ready in time for summer 2020, when the module is scheduled to be delivered to the ISS aboard a SpaceX Dragon rocket.