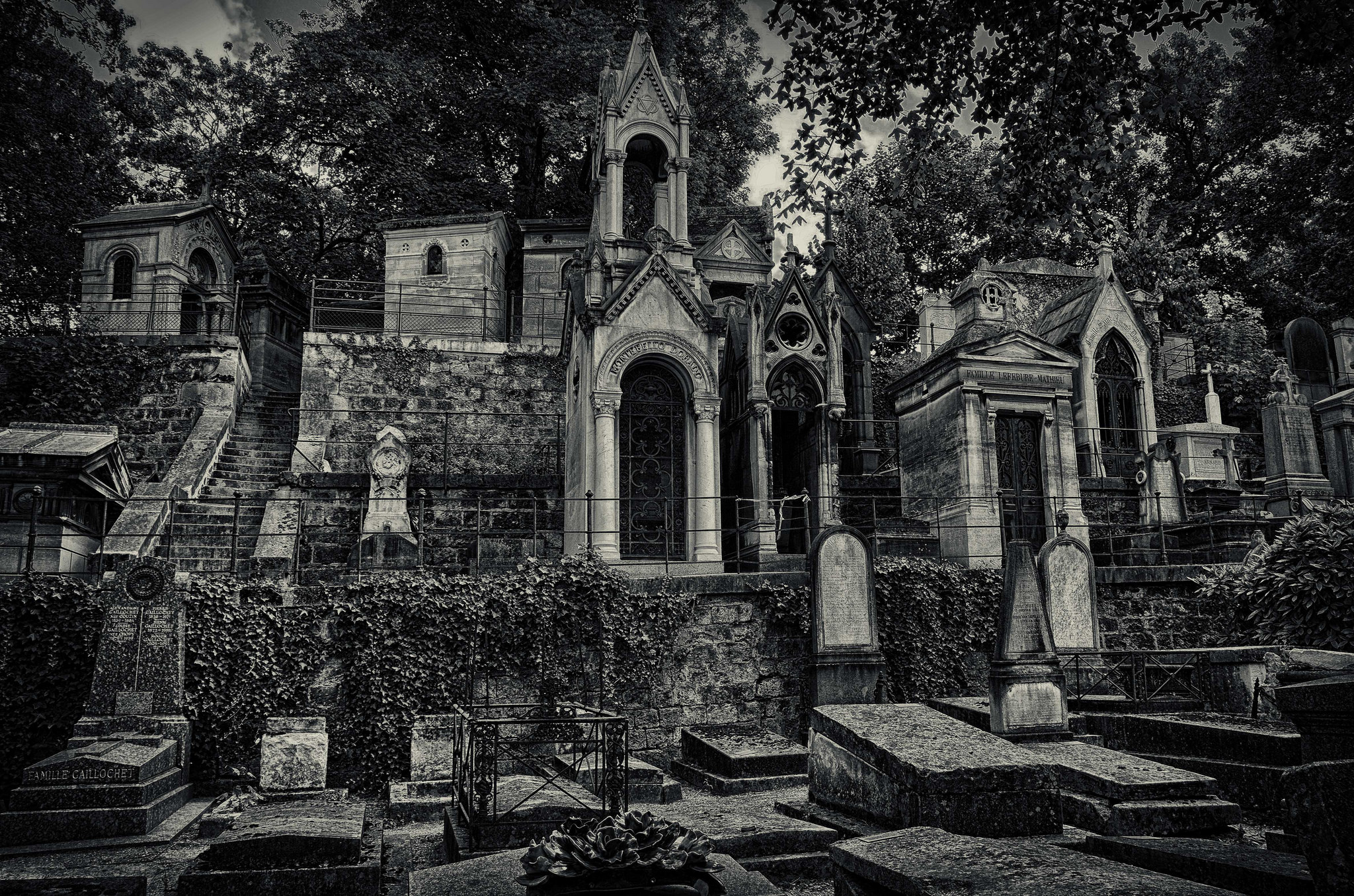 Are you brave enough to explore Paris’ Montmartre Cemetery on All Hallow’s Eve? Photo courtesy of Flickr contributor Eric Huybrechts

CGS lecturer on vampires, zombies, things that go bump in the night

Americans are expected to spend a record-high $10-plus billion this year on Halloween candy, decorations, and costumes, with superheroes, action heroes, and princesses among the most popular dress-up options for kids and witches for adults, the National Retail Federation reports.

Often lost among the ghoulish celebrations is the origin of the holiday. Halloween is based largely on Celtic religious traditions, says Regina Hansen, a College of General Studies master lecturer in rhetoric and an expert on the supernatural and how it’s portrayed in literature and film. She is also a scholar of Neo-Victorianism.

Hansen’s affinity for the supernatural began as a child, fueled by her love of authors like J. R. R. Tolkien, C. S. Lewis, and Edgar Allan Poe. In graduate school she joined the International Association for the Fantastic in the Arts, a scholarly organization devoted to the study of the fantastic, which includes the genres of fantasy, horror, science fiction, and the supernatural. There, she says, she “found a home for people who wanted to write about scary stuff. Now my scholarship has moved from writing about Victorian literature and sneaking in supernatural stuff to being more on top of it.”

Hansen is a coeditor of Giving the Devil His Due: Satan and Cinema (Fordham University Press, 2021), editor of Roman Catholicism in Fantastic Film (McFarland Publishing, 2011), coeditor of Supernatural, Humanity and the Soul: The Highway to Hell and Back (Palgrave Macmillan, 2014), and a contributor to The Ashgate Encyclopedia of Literary and Cinematic Monsters (Ashgate Publishing, 2014). She has a story published in All the Night-Tide: Steampunk Stories Inspired by Edgar Allan Poe (Aädenian Ink, 2014) and coedited a special Stephen King issue of the journal Science Fiction Film and Television. She won the CGS Ismail Sensel Award for Outstanding Teaching in 2011.

BU Today asked Hansen about the history of Halloween, how the holiday arrived in the United States, and the evolution of zombies and vampires.

BU Today: What are the roots of Halloween?

Hansen: The practices of Halloween mostly come from Celtic paganism in the British Isles, and their feast of Samhain, the new year. They believed it was the time when ghosts and spirits came out to haunt, and the Celts would appease the spirits by giving them treats. The feast was celebrated in Ireland, Scotland, Wales, and parts of Britain.

Halloween also has some elements of the Romans celebrating Pomona, the goddess of fruit and trees. That was like a harvest feast, and we have elements of that today in our Halloween celebration—we bob for apples, for instance.

A lot of people think of Halloween as an American holiday. In some ways it is a very American holiday, because we’ve made it big, but because of that, people don’t remember that its roots are Celtic-European.

How do other countries celebrate the holiday?

In Britain they celebrate Guy Fawkes Day, which is observed November 5, with fireworks. In Wales, Ireland, Scotland, and England, you’ll find Halloween celebrated the way Americans celebrate it.

In America, the real explosion of Halloween happened when the Irish immigrants came and brought their practices with them. It looked like a really fun thing to do. So other people wanted to do it.

When did it become the holiday we know today?

Little by little it became more of a children’s holiday. People found a way to make money off of it. There are people who won’t celebrate Halloween because of its pagan origins and this idea that it’s associated with witchcraft. There are certain groups in Christianity that embrace Halloween exactly for what it is—this combination of what came before we incorporated the holiday into our American culture. So now it’s paganism, Christianity, and money.

Christmas, too, was a pagan festival for a long time, then it went away as a practice, and then it came back in the 19th century.

Much of your research focuses on what you characterize as the fantastic. What does this term encompass?

It’s a style of literature and film that incorporates that which we don’t understand, things that don’t seem like they could possibly happen. In a world where everything seems realistic and mundane, those are things that stand out. The different kinds of genres that fall under the fantastic include horror, fantasy (swords, fairies), science fiction, and anything having to do with other worlds.

Do you think religion falls under the umbrella of the fantastic?

What I discovered in working on Roman Catholicism in Fantastic Film is that religion is the everyday fantastic. People are quite able to go through life believing in really unbelievable things and living their lives by principles that are believed to be supernatural in origin. Most times you find films and novels that seem to be about everyday life with no magic in it, but then there’s an element of the fantastic added. The fantastic is often introduced through the avenue of a religious character or ritual.

What entries did you write as a contributor to the Ashgate Encyclopedia of Literary and Cinematic Monsters?

Because I’ve written about Catholicism, they first asked me to write about angels. Then I got demons in American literature and film, then imps and maenads, and also death as a character.

Maenads are characters in Greek mythology, like in The Bacchae, a Greek tragedy about the women that accompany Dionysus, the Greek god of wine. They represent what happens if we have too much to drink. They start off being really happy with Dionysus and celebrating, but then they become uncontrollable as they drink more wine, and rip him apart. The True Blood character Maryann Forrester was a maenad and the first time one had appeared on TV in a while.

How did you go about researching maenads, angels, and demons?

I always started with the earliest sources I could find, whether that was Greek mythology or medieval scholastics or the Bible. From there, I put everything in context and moved forward to film and television, so I could show how these things are presented now, compared with how they were first introduced.

My research on angels came from the Bible and Midrash and Talmud sources and works by Thomas Aquinas, and then I watched the television show Supernatural, which has angels. The same thing with demons—I looked at the theology first, and then early American literature.

How have these creatures changed over millennia?

What I find interesting is that they change and change back. There seems to be more interest right now in looking at these creatures from their original or early sources. A lot of television shows, like Supernatural, use the Bible’s Book of Revelation, and try to modernize the stories. Right now there is an interest in going back to those earlier texts, whereas a few years back, writers seemed to be making it up as they went along.

Are the vampires in the Twilight series based on older descriptions of vampires or newer interpretations?

Right now there are some nice, pleasant vampires out there. Vampires’ roots go all the way back to oral culture and folklore, and some of those vampires were pretty creepy and scarily violent. The rules of how vampires were supposed to behave were introduced in the 19th century.

In the 19th century, people rediscovered folklore. That’s when Grimms’ Fairy Tales came about. Artists at that time incorporated folklore into their fiction and paintings. That’s what Bram Stoker did—he took the real folklore and made it into a vampire who follows particular rules. Stoker was the one of these writers who said that a cross would stop a vampire; not all writers used the same rule for their vampires. That really became popular in the 19th century. Some of the rules came from the folklore, and some of the rules he made up.

Where do zombies come from?

Zombies started out as part of the folklore of the Haitian culture. The voudoun religion talks of zombies, but they don’t become zombies in the way they are portrayed in movies. Zombies in the movies and television started with Night of the Living Dead. They are more akin to ghouls, in that they are flesh-eating monsters. Folkloric zombies are not really that.

I find zombies depressing. People you love that don’t know you anymore and want to eat you? You have to run for the rest of your life? There’s enough of that in the world. Some Americans play zombie games and run from evil creatures, and they are criticized because other people in the world are running from real villains.

Do you have a favorite monster?

Werewolves are my favorite because it’s not their fault. They always seem so tortured. This terrible thing happened to them, and they’re trying to be good. I like the cyclical nature of what happens to a werewolf, the full moon.

Why do people remain so fascinated by monsters and the unknown?

If you grew up religious, I think you are already primed for it. That’s the case with me, and I find others in my field were primed by having some sort of religious background. If you’re not religious and you don’t have a sense of belief in the supernatural already, it’s fascinating for other reasons. It’s a way to experience the supernatural without having to believe in it. Stephen King once said that horror is a way to face death. It’s an existential thrill, a way to laugh at death and be fine afterwards.

There are 2 comments on The History of Halloween