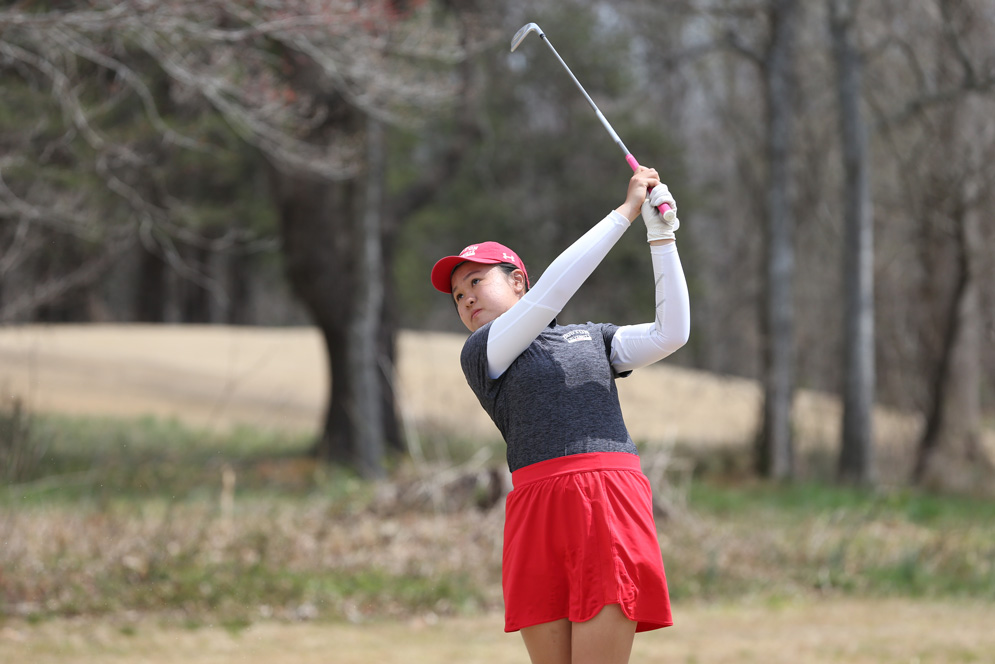 Freshman Hanako Kawasaki (Questrom) set a program record at the Yale Intercollegiate in October with a 54-hole score of 211. Photos by Andy Mead

Each person counts just a little bit more when there are only seven players on a team’s roster. So when “just about everyone has had a cold, flu, or an injury,” as the BU golf team has this spring, says head coach Bruce Chalas, it makes for a tough season.

But the team’s fortunes have turned and good health has returned at just the right time, with the 2019 Patriot League women’s golf championship set to begin Saturday. “We’ve had some challenges most of the spring in terms of good health, so the last three events have been challenging for us,” Chalas acknowledged prior to last weekend’s Navy Invitational. “But we made a lot of progress. It looks like everyone’s injury-free and feeling really good.”

Things were looking up for the Terriers in the fall, highlighted by a record-breaking performance at the Yale Intercollegiate in October. The event marked the program’s first team title since its Patriot League Championship win in 2015, and it saw the BU golfers set a new 54-hole program record, with a three-day score of 890. (The score combines four of the team’s best individual scores over the tournament’s duration. The previous record was 896, set in 2017.)

Leading the way was freshman Hanako Kawasaki (Questrom), who broke BU’s individual record (216), held by three-time Patriot League Golfer of the Year Adela Cejnarova (CAS’17), with a score of 211. The performance earned Kawasaki the conference’s Golfer of the Month Award, the program’s first since Cejnarova claimed it in May 2016. More recently, Kawasaki shattered the program’s 36-hole record at the Navy Invitational on April 14 when she shot a 68 and finished the tournament -7 shots clear of the second place competitor.

“It’s obviously a really big change for me,” says Kawasaki, who arrived at BU last fall from Vietnam. “It’s all so sudden, and it’s also a big culture shock. But the team has been really welcoming. Spring has been pretty tough, but the fact that we have such a close-knit group really helps.”

They’ve needed that bond. Since totaling 906 points at the Kiawah Island Classic at the start of spring, the Terriers scored 964, 941, and 940 points in the next three events. The last one yielded the team’s first last place finish in six years. In the fall, BU never scored over a 919 in a 54-hole event. (Lower is better, for those who don’t follow golf.)

But the Terriers are “feeling our best right now,” Kawasaki says. “We’re all ready to go.”

And the team’s latest performance proved that to be the case: a second-place finish at the Navy Invitational, where the Terriers (607) were only four strokes behind first-place Navy (603).

When BU travels to Richmond University for the Patriot League Championship this weekend, the competition will present a different challenge: unlike during the rest of the season, when five players compete for the four best scores, the conference tournament calls for six players to compete and counts all of their scores for the final team score. Chalas says this works to BU’s advantage.

“This is by far the deepest team that we’ve had in terms of talent,” the coach says. “We’ve got six players ready to go for the Patriot League Championships.”

In addition to Kawasaki’s records, the team has benefited from a strong performance from junior Zhangcheng Guo (CGS, ENG), who placed second at the Pinehurst Intercollegiate in March.

As the Terriers look to reclaim a conference title they last won four years ago, the players say they’re trying not to put too much pressure on themselves this weekend.

“We just have to play our game and perform to our own abilities,” Kawasaki says. “We have to play how we expect ourselves to play.”

The BU golf team competes in round one of the Patriot League women’s golf championship Saturday, April 20, hosted by the University of Richmond, at Independence Golf Club, 600 Founders Bridge Blvd., Midlothian, Va. The 54-hole tournament concludes Sunday, April 22, with the winner earning a bid to the NCAA Tournament.