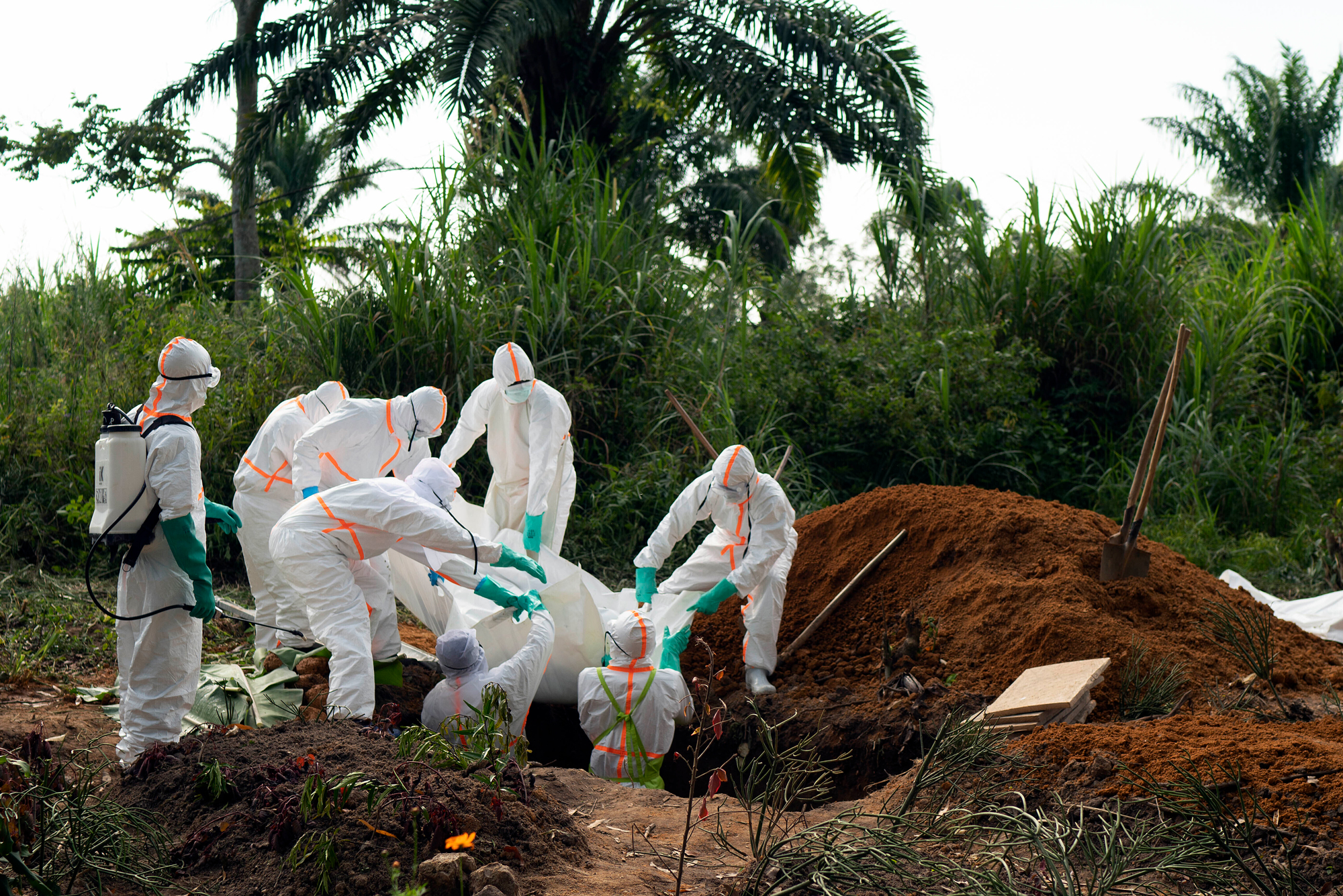 An Ebola victim is put to rest at the Muslim cemetery in Beni, DRC Congo, July 14. The World Health Organization declared the current Ebola outbreak in the Congo a global health emergency Wednesday after the disease spread to eastern Congo’s biggest city, Goma. More than 1,600 people have died in the current outbreak, the second largest in history. AP Photo/Jerome Delay

Talking about the Ebola Outbreak with BU Experts on the Disease

One year after NEIDL began working on the Ebola virus, global health emergency highlights need more than ever

When the World Health Organization (WHO) declared the yearlong Ebola outbreak in the Congo a global health emergency on Wednesday, one team of BU scientists had a particularly vested interest in that decision: the medical researchers at the University’s National Emerging Infectious Diseases Laboratories (NEIDL), who one year ago began working on samples of the Ebola virus.

Nahid Bhadelia, a School of Medicine assistant professor of infectious diseases and the medical director of the Special Pathogens Unit at Boston Medical Center, runs NEIDL’s medical response program. She says the WHO’s decision to declare a global health emergency has been complicated by ongoing wars and conflicts in Congo, but adds that the decision was overdue considering that the outbreak has raged since last August and infected at least 2,500 people and killed nearly 1,700.

“I don’t envy the position they were in,” she says. “If you asked me if they waited too long, I think they did.”

BU Today caught up with Bhadelia and John Connor, a MED associate professor of microbiology, to talk about the outbreak—the second largest in history—as well as about BU’s progress in researching ways to better fight and contain the Ebola virus worldwide. (Live Ebola virus research can be conducted only in a lab that the Centers for Disease Control & Prevention has designated as BioSafety Level-4, its highest classification—BU’s NEIDL is one of only 13 such labs across the United States.)

With Nahid Bhadelia and John Connor

The Brink: This epidemic has raged for a year, but only this week was it declared a global health emergency. Did the WHO take too long to make this decision?

Bhadelia: I think there have been arguments on either side of that. When the International Health Regulations were revised in 2005 because of the SARS outbreak, there was concern that China was not sharing information in a timely manner. When it was revised, all countries had to tell the WHO about outbreaks within their borders if they thought it might have international consequences, and the WHO had the power to declare a Public Health Emergency of International Concern (PHEIC) as a call to arms while ensuring countries’ trade and travel were not affected. If countries will be hurt by an outbreak through trade and travel, they will be less encouraged to share information. But since then, every time PHEIC has been declared, it has had negative impact on affected countries. This time around, it’s a really tricky situation with the current outbreak, because of the borders, the wars, and the vaccine running low. There has not been a concern for international spread—it’s more of a concern for a regional emergency, but it is a problem they cannot control with the current level of support. It was not a clear answer for the WHO.

Connor: Yes, I think it should have been made earlier, but I’m also sympathetic to the very difficult box the World Health Organization finds itself trapped in. I do not think the WHO has been blind for the potential for this virus to spread across borders in unexpected ways. But I do think they want to try and make certain that they do not make a declaration that people think in hindsight was jumping the gun.

It’s been almost a year since BU’s NEIDL received the first Ebola virus samples and began work on them. Can you talk about what’s happened in that year?

Bhadelia: NEIDL’s mission is both with the science and to create a scientific database to help deal with these types of outbreaks. We have some diagnostics available in the field, but we need more. NEIDL’s mission has been to create the knowledge, but also the tools to help with outbreak response. We are finally doing what we’re meant to be doing, contributing to the fight in the scientific field and hoping it carries over to the world and helps with real emergencies. NEIDL is working on new diagnostics tests to help quickly identify patients with highly communicable infectious diseases, helping define how the human immune system responds to the Ebola virus disease, and working to identify therapies that might be effective and could be tested in humans in the future.

Connor: There is a paper that came out last year, where NEIDL folks collaborated with a raft of people. Our primary partner was BD Corporation. We were able to identify an Ebola virus infection and malaria infection simultaneously. That was important because they are reporting that out of every 100 people identified, 98 probably don’t have Ebola. They probably have malaria. The current gold standard for treating Ebola only looks for Ebola. This would allow us to look more broadly, save time, and increase the ability to do diagnostics at the point of need. That’s only a fraction of the things that are going on here.

Can you explain why Ebola is so deadly and why it’s hard to contain?

Bhadelia: The fear is everywhere, not just here, particularly in the communities where there might be spillover of the disease. Let me explain this way: with measles, every person who gets it is likely to transmit it to 12 to 18 people. With tuberculosis, each person is likely to transmit it to 10 people. But with Ebola, that number is only two. It’s not an airborne disease, it’s not easily transmissible. But the reason it’s difficult to control is that there aren’t strong public healthcare delivery systems where these outbreaks occur. And now there is the additional challenge of the conflict in the area and the mobility of the population there. The other reason it’s hard to control is we haven’t had a good vaccine to prevent an outbreak. The current vaccine being used in the Democratic Republic of Congo looks pretty good, but there are shortages in dosages. [The New York Times reports that more than 160,000 people have received an effective Ebola vaccine, produced by Merck, but as the supply has dwindled the WHO has recommended smaller doses for people to prevent running out of the vaccine.]

How worried should people in the United States be about Ebola here?

Bhadelia: It still is a regional emergency. In the area where this is going on, it’s hard for people to get out and seek care. If there is sustained spillover, like in Uganda or other countries that have an international hub airport, there’s more concern of a spread if it was sustained. But even if it makes it here to the United States, it’s not going to spread, because all it takes is to find the potential contacts and to stymie the transmission. We have a very strong public health system to do that.

It’s difficult to predict anything, but what does a timeline for the Ebola work at NEIDL look like?﻿

Bhadelia: The biggest problem we had seen until now has been the ability to collaborate across multiple disciplines. Now, because we have new researchers, they come with different aspects and knowledge of the problem. What we’ve been able to do is build those bridges across different disciplines, and build scientific experiments that can be translated back into the field. The addition of these new faculty has allowed for linkages we didn’t previously have.

Connor: I’m always disinclined to predict that silver bullet, that there will be a miracle that fixes everything. For this epidemic, like the prior one, there will be multiple factors that are needed, multiple improvements in care, tracking, treatment, and in diagnosis, all of which can contribute. Nobody is going to rappel out of a helicopter with a small vial of something and the whole problem is going to go away. But the reason I am excited to work here: there is a lot of work that still needs to be done. In this building, and others around the world, a lot of things need to be done to make this Ebola outbreak and others like it less eye-popping. This is one of the buildings that is capable of doing that needed research.

Talking about the Ebola Outbreak with BU Experts on the Disease