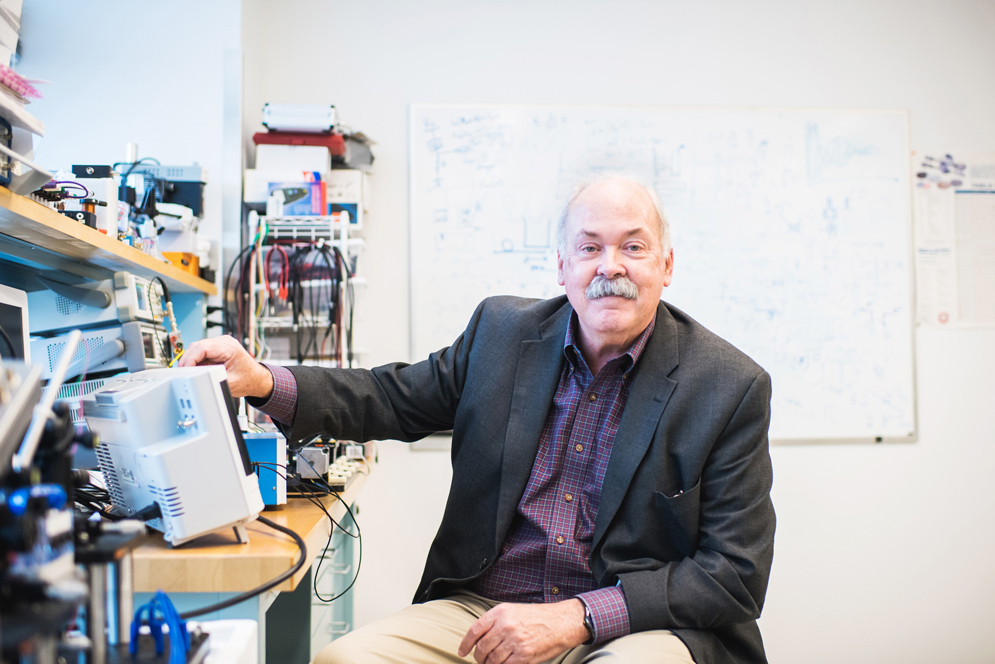 When David Bishop checked his phone February 7, 2019, he was stunned by what he saw. After a 50-year research career, Bishop received the news via email that he had just been elected to the National Academy of Engineering (NAE), the premier professional society for engineers.

“It’s an amazing group of people and I’m humbled to be a part of it,” says Bishop, a Boston University College of Engineering professor. “I feel like the only rational response in this situation is to feel honored. I feel gratitude, surprise, and humility.”

The NAE highlighted Bishop’s work in high-capacity optical switch technology during his 33-year stint at Bell Labs as a major accomplishment. This was also the reason that he was elected to the National Academy of Inventors in 2018.

As one of only three members of the NAE at BU—the other two are Robert A. Brown, BU president, and Farouk El-Baz, director of the Center for Remote Sensing and research professor of archaeology and of electrical and computer engineering—Bishop stands out, but he says that as BU and the College of Engineering continue to grow, he wouldn’t be surprised if more faculty are recognized in this way.

“The College of Engineering has had amazing growth over the past 10 to 15 years. An award like this is an example of the recognition that the University and college are getting and shows that we’ve moved into the upper echelons of engineering schools,” says Bishop, professor of electrical and computer engineering, physics, materials science engineering, mechanical engineering, and biomedical engineering.

He also adds that this is one of the top honors of an engineer’s career and he’s not sure how it could get much better than this. But that doesn’t mean his career is over by any means.

“Right now I’m 67 and I’m in the middle of the biggest intellectual challenge of my life,” he says.

Bishop is heading up CELL-MET, the interdisciplinary team at BU and two other universities, which, under a National Science Foundation Engineering Research Center grant, is working to develop personalized heart tissue.

“I’m part of a team that’s working to create an all-encompassing solution for heart disease that might save the lives of millions of people,” says Bishop. To him, this long-term research is akin to playing in his own Super Bowl. “We haven’t won yet, but we are part of this cohesive and extraordinary team that’s constantly strategizing and working together to meet our goal.”

Bishop, who is also head of the division of materials science & engineering, feels just as he did when he began his career in science when he was 17 years old—excited to solve really difficult problems. “I always knew I wanted to be a scientist—even when I was 10 or 11 years old,” he says. “And if you asked me when I was that age what type of career I wanted to have, it would have been the career that I have had.”

The NAE is part of the National Academies of Sciences, Engineering, and Medicine, and provides engineering leadership in service to the nation. It has more than 2,000 peer-elected members, drawn from senior professionals in business, academia, and government, who are among the world’s most accomplished engineers, according to the NAE. Members are nominated and elected based on contributions to engineering research, practice, or education; pioneering or advancing fields of engineering; and professional integrity. Notable members include the late Apple CEO Steve Jobs, astronaut Neil Armstrong, synthetic biology pioneer George Church, transistor co-inventor John Bardeen, and Draper Laboratory founder Charles Stark Draper.