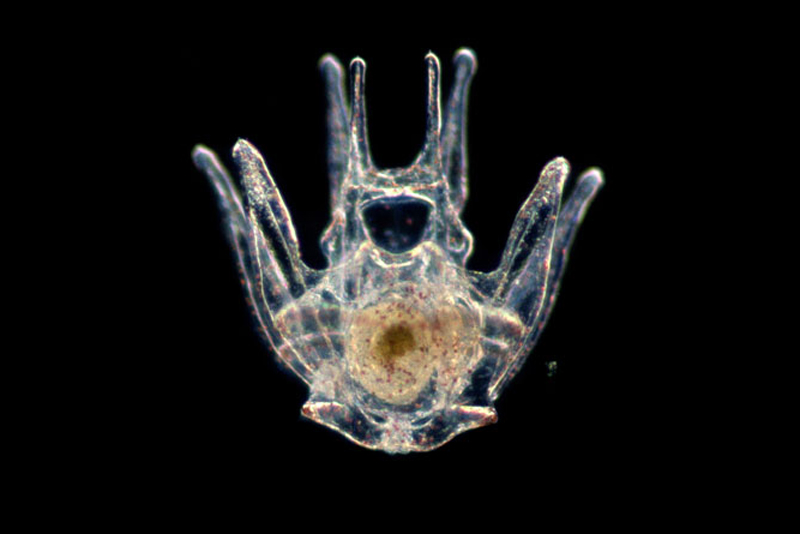 Sea urchins lead pretty boring lives. In every ocean, the spherical echinoderms—the same family as sea cucumbers and starfish—meander along on tiny tube feet. They often have the same thing for breakfast, lunch, and dinner: kelp. The only flash of excitement is when a careless predator lands on one of their spines.

But in a sixth-floor lab at Boston University’s Life Science and Engineering Building, the dull life of the sea urchin is a source of endless fascination to researchers. There, three lidless tanks are stocked with spiny, clementine-sized adult urchins, while refrigerators house their offspring, microscopic larvae.

The lab’s director, Cynthia Bradham, has dedicated her career to studying the larvae of the Lytechinus variegatus species of sea urchin. An associate professor of biology, she watches them grow to learn more about embryonic development; her work could have implications for our understanding of a wide range of issues related to human development, including cancer, birth defects, regenerative medicine, and the growth of new organs.

While watching adult sea urchins is about as exciting as a barnacle race, viewing their larvae through a microscope is mesmerizing. Under polarized light, their skeletons—thin lines shaped like an upside-down art easel—shimmer in the colors of the rainbow. Bradham’s office shelves are filled with framed journal covers featuring photographs—some of them her own—of the larvae.

“I could sit and watch them swim all day and be happy; it looks like they’re made of blown glass with diamonds inside,” she says. “The larvae are bilateral, they have left and right sides, the same as us, and I find them completely beautiful.”

Male and female sea urchins reproduce by sending out thick fogs of eggs and sperm in the hope they’ll meet in the wide expanse of ocean. A fraction of the eggs will fertilize and hatch larvae. As the growing larvae swim through the sea, their adult selves form inside. Eventually, the larvae sink to the seafloor and turn themselves inside out, metamorphosing into spherical adults with a hard outer skeleton.

The larval skeleton, which is made of calcium carbonate, is jettisoned, “like a chicken’s eggshell,” says Bradham. Despite its transience, the larval skeleton has an elemental exquisiteness, even in the earliest stages of its development.

As foundational cells, known as primary mesenchyme cells, begin to form the skeleton, a ring—with two devilish horns at its top—appears, sprouting dozens of thin, cobweb-like wisps. These tenuous threads are called filopodia, and Bradham’s research suggests that when they touch the embryo’s outer layer, called the ectoderm, they’re given biochemical signals that contain “the information to pattern the skeleton…that tells them either come here or come there or start making the biomineral or don’t.”

This pattern formation—the biological term for how cells that make up organs and tissues organize into those structures—is at the heart of Bradham’s work. She’s fascinated by how nature encodes architectural plans in cells and then communicates and applies them, whether it’s building a sea urchin skeleton or a human one. And she’s captivated by the actual patterns that result: The easel-shaped branches of the growing sea urchin skeleton mirror each other.

“Aside from sponges, all animals are patterned. You began life as a single cell, and that single cell became you. Doesn’t that just blow your mind?” she says. “You can look at your own face or your hand or your arm and ask the same question: How did that pattern come to be?”

Because the sea urchin is a relatively simple organism, Bradham can easily explore how these biological patterns form. The sea urchin embryo is transparent, develops quickly, and contains few cell types; compare that to the dazzling complexity of your body. Even adult sea urchins only have about 15 to 20 cell types, humans at least 200. Still, says Bradham, our journey from a single cell isn’t so different from that of a sea urchin, which means the discoveries she makes in the lab can be applied to the study of human development and help answer why the process sometimes goes wrong.

“Developmental mechanisms are very highly conserved in evolution, so the way you develop and the way a fruit fly develops is surprisingly not very different in terms of what’s going on molecularly and cellularly,” says Bradham. She disrupts the patterning genes in the urchin embryo, then watches to see the impact.

Bradham has identified many of the sea urchin genes responsible for patterning the skeleton using systems biology, where math and computer science help decode how organisms are structured and work.

“One of the surprises was that almost all of the genes are implicated in some aspect of metastatic progression,” she says. And that could help illuminate the metastasis, or spread, of cancer cells in humans.

“The primary mesenchyme cells migrate around and they arrive at a position and they differentiate, and that’s pretty much what a metastatic cell does, except it forms a tumor.”

With a better understanding of how cancer cells travel around the body wreaking havoc, she says, we may be able to stop them in their tracks and prevent tumors from forming. Sea urchins might lead very boring lives, but one day, we might owe them ours.

This work is supported by funding from the National Science Foundation.