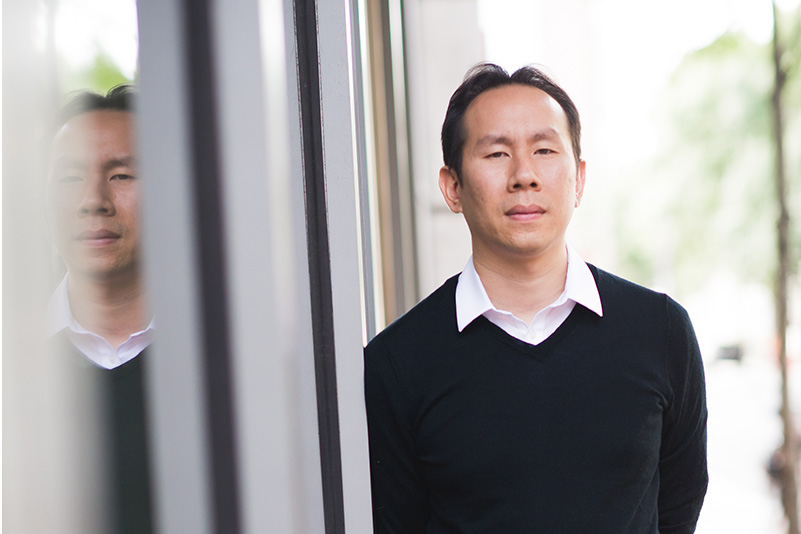 Boston University’s brain science research is planted firmly on the fast track, thanks to two new grants totaling $4.6 million from the NIH BRAIN Initiative to Jerry Chen, a Boston University College of Arts & Sciences assistant professor of biology. The grants, one for $1.9 million over five years to study how the brain assembles memory, and one for $2.7 million over three years to develop new microscopy technologies, were announced just three weeks after Chen won another major prize: the NIH 2018 New Innovator Award of $2.5 million over the next five years, money that will fund Chen’s effort to crack the brain’s neural code.

“This recognition of Jerry’s work is truly outstanding,” says Gloria Waters, vice president and associate provost for research. “He is clearly doing work that is at the cutting edge of neuroscience and which fits beautifully into the goals of the Center for Systems Neuroscience to develop and employ new technologies that will provide a window into better understanding the brain. His collaboration with Michelle Sander in engineering is also an example of the types of synergies we have been hoping to create between the life sciences and engineering through the creation of the Rajen Kilachand Center and Fund.”

“Let’s say you’re in a car driving towards a traffic light,” Chen said, in describing his research. “Somehow, your brain has figured out that the red light perceived by your eyes means that you should stop before the crosswalk. There must be a mental process by which the incoming information you are currently experiencing is being compared against your previous experiences in which you’ve learned that red means stop. The computations and circuits in the brain that give rise to this are very much a mystery.”

Chen hopes to record activity from different parts of the brain simultaneously to learn how the whole brain works to carry out these computations. “Our goal is a circuit-level understanding of how all of these stimuli generate higher-level representations, how those representations are associated with action, and how they are learned and recalled as needed.”

Chen’s second BRAIN Initiative award of $2.7 million for New Technologies and Novel Approaches for Large-Scale Recording and Modulation in the Nervous System will be divided among three laboratories working together to devise a new kind of microscope that will allow researchers to observe the firing of thousands of neurons in the brain in greater detail.

Currently available microscopic technology generates from 30 to 40 images a second. “That’s about the same speed as a video camera, but we need to capture more than 1,000 frames per second to see when a neuron fires,” says Chen, who is collaborating on the project with two other researchers. One is Michelle Sander, an assistant professor of electrical and computer engineering at BU, who will design a novel and compact fiber laser system that will offer ultrafast pulses specifically customized for the microscope. That system will use techniques similar to chirped pulse amplification, for which one half of the Nobel Prize in Physics was awarded this year, and will enable high-speed imaging with fast readouts and sensitive detection that far exceeds what is currently available from commercial lasers and microscopes. Sander was awarded a prestigious Air Force Office of Scientific Research Young Investigator Award in 2016.

Chen’s other collaborator is Vincent Pieribone, a protein chemist and director of the John B. Pierce Laboratory at Yale University, who will devise powerful new molecular sensors that can directly read out the fast electrical activity underlying neuron communication. The result—two-photon microscopy and genetically encoded voltage-sensitive indicators—will give Chen’s researchers the information they need without doing postmortem neuron identification.

Chen, who came to BU from the University of Zurich, Switzerland, three years ago, also won the 2016 Stuart and Elizabeth Pratt Career Development Professorship, which highlights excellence within CAS. As a faculty member of the Center for Systems Neuroscience and the Neurophotonics Center, Chen’s awards are part of larger efforts at BU to examine how systems of interacting neurons mediate behavioral function through interdisciplinary approaches to develop and deploy impactful photonics technologies in the neurosciences.

“To get all these grants at once, it feels a little like winning the lottery,” says Chen. “We’re really excited to be given the chance to deliver on what we proposed and move the field forward.”