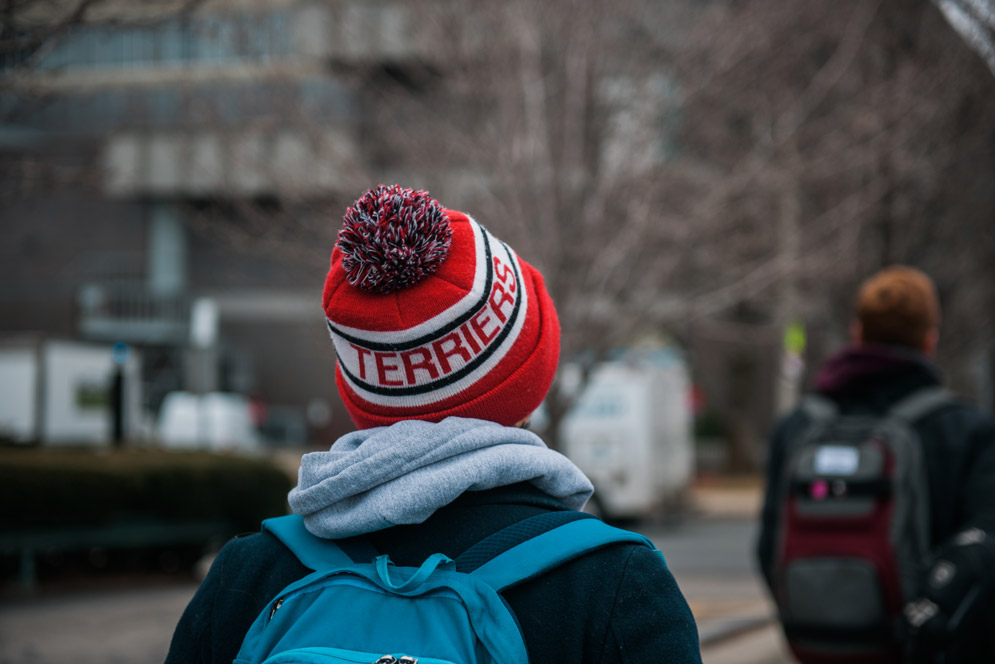 Half of the students who apply to BU have never set foot on campus. Current students can help them navigate, should they attend. Photo by Janice Checchio

It’s only a matter of time until Harlem resident Pedro De Los Angeles goes viral. In a video posted on Twitter, the Democracy Prep Charter High School senior logs online to check the status of his early decision application to Boston University’s Class of 2022. After a few nerve-racking seconds, his body shoots out of the chair and his classmates scream. He made it.

Christine McGuire, vice president and associate provost for enrollment and student administration, describes the increase as huge. “It’s just all more positive signs of the quality of BU and how desirable we are,” she says. “We’ve become more competitive, more selective.”

Kelly Walter (SED’81), associate vice president for enrollment and dean of admissions, says the increase reflects “the quality of the academic experience, our growing reputation, and our improved rankings. These are the reasons why students want to be here.”

Admissions now faces the arduous task of sorting through the tens of thousands of applications to fill the 3,300 Class of 2022 slots, 100 fewer than last fall. Applicants will learn their fate by early April.

Some interesting aspects of this year’s application season:

Applying for early decision gives a college application a bit of extra oomph, McGuire says, because it tells admissions officers that the school is a student’s first choice. It helps students, since they’re competing against fewer applicants, and if they are accepted, the stressful college waiting game is over. If students are accepted for early decision by a school, they are contractually obligated to attend and must withdraw their other college applications.

The National Association for College Admission Counseling reports that last year, colleges reported a 5 percent increase in early-decision applications nationwide, in line with BU’s 8 percent rise this year over last. In fact, Walter says, early decision applications have increased 161 percent over the last five years. BU has two rounds, which this year were November 1 and January 2.

4. They come from around the world

As has been the case in recent years, social media continue to change the admissions game.

Walter says new social media initiatives, like Snapchat takeovers and encouraging early decision applicants to use the hashtag #BUEarlyBirds have been especially effective because they give students a platform to talk to admissions staff and current BU students.

“Our goal is to meet students where they are, and I mean ‘meet’ parenthetically—we don’t have to see students in person anymore,” Walter says. “It used to be that meeting students on campus and in person was the only way to connect with them. While this type of outreach remains important and is the bedrock of what we do, the reality is that social platforms are where we are connecting with students today. We ramp them up each and every year. It’s very effective.”

Walter says half of the students who apply to BU have never set foot on campus, but they can get a feel for the place through the Admissions virtual tour.

6. Applicants do well in school and on standardized tests

Six Quick Stats about Applicants to the Class of 2022