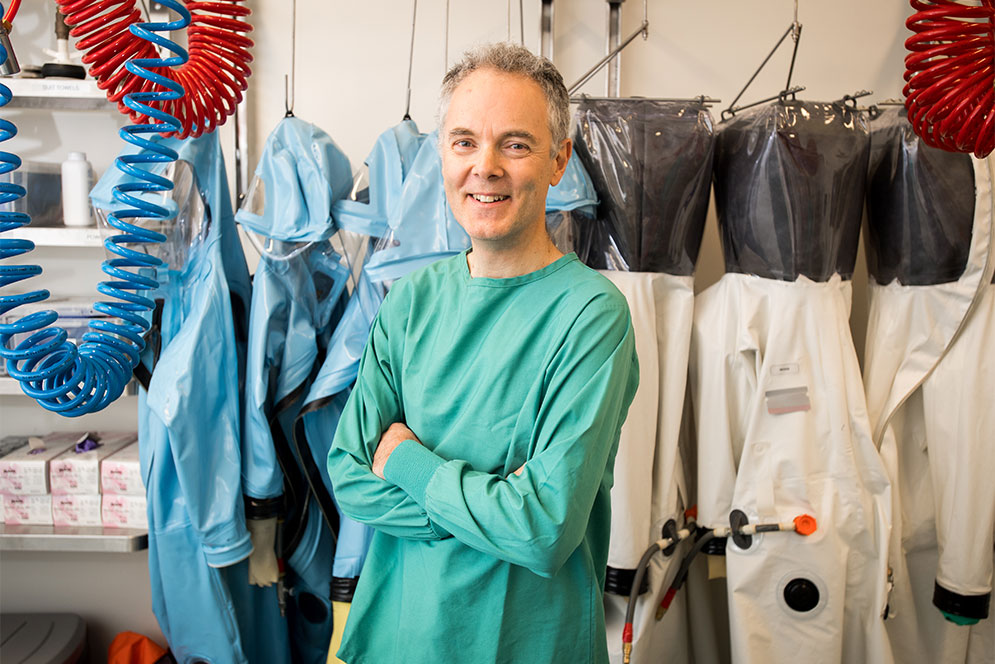 NEIDL researcher Robert Davey has found that derivatives from a commonly used anti-malarial can prevent Ebola virus from entering cells.

Researchers have discovered that certain derivatives of amodiaquine, a medication typically used to treat malaria, could provide a new therapeutic approach to treating patients infected with Ebola virus disease by blocking the viruses from entering cells.

The inspiration stemmed from observations made during the 2014–2016 Ebola epidemic that swept through West Africa, infecting more than 28,000 people and killing more than 11,000 in Guinea, Liberia, and Sierra Leone alone. The outbreak attracted the attention of virologists from around the world, and several of them, including Robert Davey, noticed something intriguing: patients with Ebola who had been treated with amodiaquine were 31 percent less likely to die.

“People were saying ‘it’s interesting’; I wondered if it was important,” says Davey, a Boston University School of Medicine professor of microbiology and a researcher at BU’s National Emerging Infectious Diseases Laboratories (NEIDL), who was working at the Texas Biomedical Research Institute at the time. “I thought we should test some [chemical] derivatives and see if we could find some improvement over the amodiaquine performance,” he says.

Davey and collaborators set out to learn exactly which parts of the amodiaquine molecule were inhibiting Ebola virus infection. Their findings, published on November 3, 2018, in Antiviral Research, show that modified amodiaquine derivatives are significantly less toxic and nearly 10 times more effective at blocking Ebola virus than the original amodiaquine formula that greatly reduced mortality during the West Africa outbreak.

To make the discovery, Davey teamed up with other virologists on the hunt for new antiviral therapeutics. Serendipitously, one of Davey’s colleagues from Japan—Yasuteru Sakurai, from the National Research Center for the Control and Prevention of Infectious Diseases in Nagasaki—knew another Japanese researcher, Masanori Baba of Kagoshima University, who had already made a series of amodiaquine derivatives in an effort to find new treatments for HIV and other viruses.

Davey says amodiaquine inhibits the two diseases, malaria and Ebola virus disease, in related ways. All cells need to get food from their surroundings. With malaria, amodiaquine prevents the parasite from digesting food from inside red blood cells, so it basically starves to death. Ebola virus mimics food and tricks your cells into swallowing and trying to digest it. However, the virus senses this and uses it as a trigger to begin replication, avoiding digestion. So, by interfering with normal cell digestion, amodiaquine also blocks Ebola virus infection.

“With Ebola, we are affecting your own cell’s digestive system, but for a short time, which the cell can survive,” says Davey. “And the drugs that we developed likely improve targeting to places in the cell where Ebola virus likes to get to, whereas for malaria, the drugs are best at targeting the parasite’s feeding process which it needs all the time. It’s a subtle difference in chemistry, but it’s important for making an effective drug treatment for patients.”

Working together at Davey’s former lab in San Antonio, Texas, the team—which also included Masaaki Toyama of Kagoshima University and Norikazu Sakakibara of Tokushima Bunri University—tested nearly 70 amodiaquine derivatives, mixing each one with cells infected with Ebola virus and observing the effect that each derivative had on the live virus infection.

What they found, says Davey, was encouraging. Fourteen of the compounds tested did a better job inhibiting the Zaire strain of Ebola virus disease than straight amodiaquine. They also noticed that when two particular parts of the amodiaquine molecule were modified, the potency against the virus was further increased. Then, by combining the two features, they created further potent compounds, which appeared to completely prevent the virus from entering cells.

“If you combine those two things—less toxicity and better performance against the virus—you get something called a selective index,” says Davey. “The selective index that we found easily met the criteria for clinical development.”

Since arriving at NEIDL, Davey and BU researchers Manu Anantpadma and Patrick Keiser, who joined Davey in the move from San Antonio to Boston, are taking the next steps on the long road of developing the discovery from “it’s interesting” to an approved therapy. Next, Davey says, will come testing in animal models, as well as testing the potent compounds against other strains of Ebola virus.

Davey was drawn to BU, he says, by the opportunity to work at NEIDL, particularly in its BSL-4 lab, and because he has fond memories of Boston from years working as a postdoc on the Harvard Medical School campus.

“This is where I gained a passion for emerging infectious disease research and especially developing drug-based therapies,” he says. “Boston is a hub for innovative scientific research and BU has great potential for new innovative opportunities through its excellent engineering, biomedical, chemistry, and traditional medicine programs. Also, my wife has always loved Boston and two of my three children were born here, so it is a type of homecoming for them. I am very happy to be here.”

Davey also says he plans to continue his collaboration with Sakurai, Baba, Toyama, and Sakakibara, who are eager to work in the BSL-4 lab at NEIDL and who will be visiting the lab in the near future.