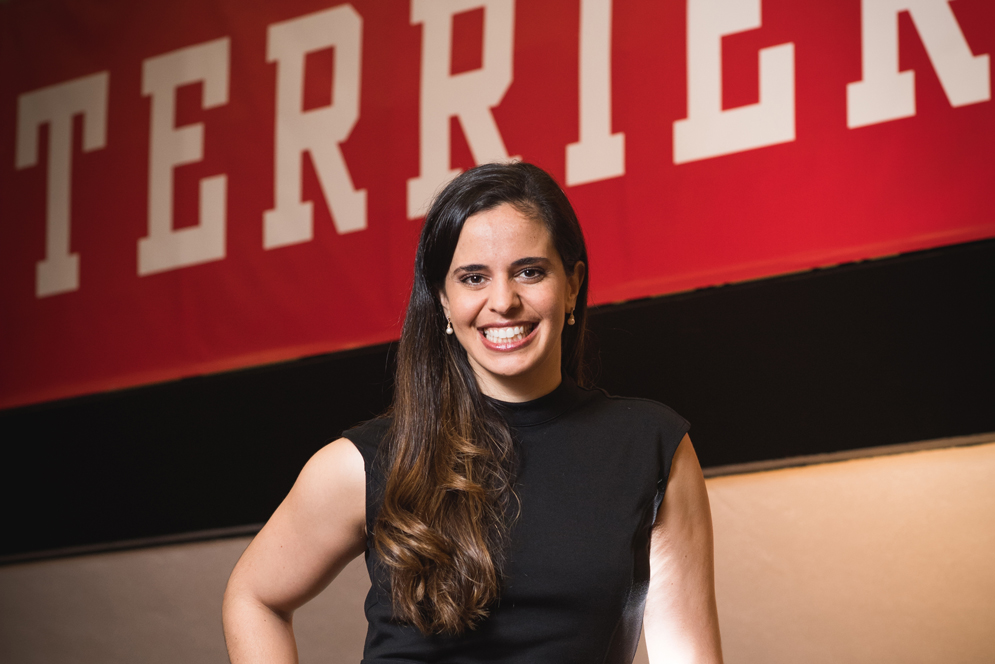 Marissa Nichols has been appointed BU Athletics first director of leadership and career development. In that role, she will help to expand the reach of the Bloom Family Leadership Academy, which helps foster student-athlete leaders. Photos by Jackie Ricciardi

Terriers from several varsity sports, among them track and field, hockey, and lacrosse, gathered in the Case Center’s Eilberg Lounge on a cold night last month for a seminar on leadership, led by Marissa Nichols, BU Athletics first director of leadership and career development. The goal of the event, hosted by the Bloom Family Leadership Academy, was to help student-athletes explore ways to turn challenges into opportunities for improvement, rather than insurmountable roadblocks.

Nichols is charged with helping nearly 600 student-athletes develop career and life skills through the leadership academy. It’s a role she’s uniquely qualified for.

As a University of Nevada, Las Vegas, undergrad, she was a softball All-American and an NCAA Woman of the Year finalist. After her collegiate softball career, she was a UNLV life skills coordinator, developing a curriculum to help students with issues ranging from productivity and time management to professional etiquette and financial education. In addition, she was an academic advisor to several UNLV teams. During that time she earned a master’s in counselor education and a PhD in higher education administration at UNLV.

Appointed last spring, Nichols has become an integral resource for Terrier student-athletes over the course of just a few months, helping them navigate their BU careers, both on and off the field. She also manages the Student-Athlete Advisory Committee, coordinates all first-year programming, and helps both student-athletes and coaches hone their leadership skills.

“At the core, my role is to develop programs and initiatives for the student-athletes, as well as the coaches, that help them develop from a holistic standpoint, from a leadership standpoint, and from a career-development standpoint,” Nichols says.

Drew Marrochello, director of Athletics, says Nichols demonstrated all of the skills necessary in a director of leadership and career development. “You’re talking about having the presence to stand in front of coaches and student-athletes, about being able to connect the campus with some of the resources we have here to create synergies, about career network planning, and about all of the things that go along with collecting our alumni base. Marissa was the candidate who showed she had an aptitude for all of these different areas,” Marrochello says. “She came in and clearly painted the canvas quicker than we ever thought anybody could.”

Nichols says that she was drawn to the BU job because of the opportunity to build on the leadership academy’s commitment to growing student-athletes. She also liked the idea of taking on a brand-new position that offered a blank slate. It was “an opportunity to be creative and innovative,” she says. “I loved the core values of the department. I knew that there were a lot of great people, and I saw that the administration and Drew are very much invested in developing people here, and that’s a big value of mine.”

Preparing athletes to tackle the game of life

At the December meeting with student-athletes, Nichols spoke about her own experience as an All-American softball player, sharing stories about injuries she’d sustained and the attitude necessary to overcome them.

Men’s distance runner Johnny Kemps (Questrom’20) says Nichols’ personal story of perseverance and her efforts to help students forge successful athletic careers and a meaningful life outside their sport has already won her legions of fans.

“She was very vulnerable with us. She connected to us on a personal level. It was really inspiring to see,” Kemps says. “She spoke about living her life authentically—those were the words that she used. She told us a candid story about that. That really hit me. She was in it for something way bigger than herself.”

Kemps says that many student-athletes seek Nichols out for advice on issues from personal problems to help writing a résumé. “What you do in the leadership academy is not just going to make you better at your sport. It’s going to truly allow you to be the best person you can be,” he says. “That really comes back to what she’s doing.” As an example, he points to his involvement with Athlete Ally, an organization that provides a support community for LGBTQ athletes and allies and educates people on LGBTQ issues. Nichols, he says, was instrumental in creating a BU chapter.

“She got behind that and gave us her full support, which was pretty cool,” Kemps says. “She has the ability, in this position, to make an impact and really support students in the way that they need.”

Nichols says that data—knowing what works and what doesn’t—informs everything she does. “I pride myself on being a practitioner-scholar in that in everything I do, I’d like it to be data-driven and as effective as it can potentially be,” she says. “I draw a lot of my curriculum and assessment practices from the literature, and I’m always trying to help measure the effectiveness of what we’re doing.”

She says that the Bloom Family Leadership Academy, created in 2013 through a commitment by BU trustee and rugby alum William Bloom (CGS’82, Questrom’84), aims to develop Terrier athletes over three stages. In stage one, athletes develop self-awareness, learn how to successfully transition to the University, begin to explore career paths, and look to move toward a growth mind-set toward their own leadership potential.

In stage two, student-athletes work on professional skills, effective communication, and leading others. In the final stage, they home in on practical experience in their chosen field, how to prepare for the transition to life after athletics, and how to build relationships with a network of mentors.

The end result, Nichols hopes, is athletes as prepared to tackle the game of life as they are to tackle the challenges on the playing field.

“I think a lot of it is helping student-athletes with self-awareness and that emotional intelligence piece—developing their own personal philosophy and a set of core values to help guide their day and helping them think beyond what they’re doing now, which can be difficult when you’re caught up in the day-to-day grind,” she says. “Another important piece is helping them see that everything they do now is setting them up to be wildly successful when they finish.”

There is 1 comment on Marissa Nichols, Athletics First Director of Leadership, Career Development