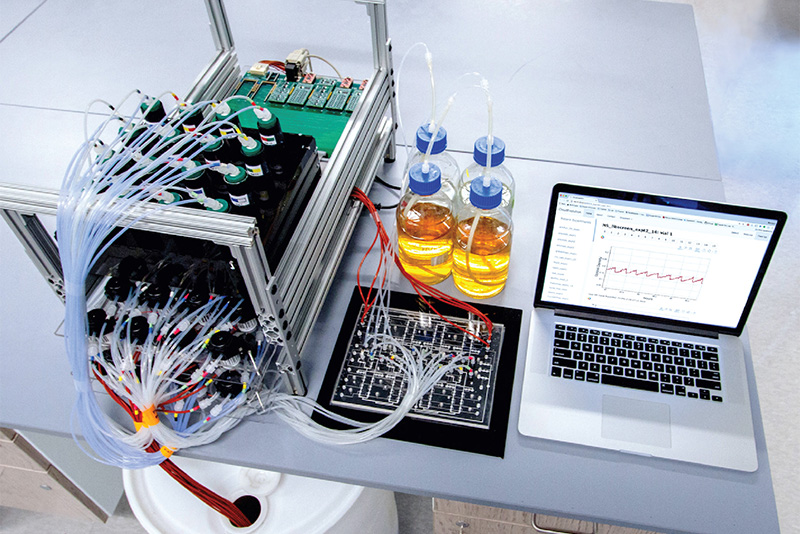 The eVOLVER platform, developed by Ahmad Khalil, a BU assistant professor of biomedical engineering, can continuously monitor and control hundreds of individual cultures in real time.

Ahmad “Mo” Khalil, a Boston University College of Engineering assistant professor of biomedical engineering, has developed an automated platform, constructed cheaply and entirely in the lab, that can continuously monitor and control hundreds of individual cultures in real time, and can be connected to a network. Called eVOLVER, the device is now being beta-tested in several labs across the country. Khalil’s work has been published online in Nature Biotechnology and is scheduled to appear as the journal’s July cover story.

“Right now scientists build their experiments around the equipment that is available to them,” says Khalil. “We wanted to flip that concept on its head to allow scientists to customize their equipment based on the experiments they want to run.”

Standard techniques for cell growth can be scaled up to grow large numbers of cultures at the same time, but culture conditions cannot be precisely controlled or customized. Technologies, such as bioreactors, allow for precise control over certain conditions, like temperature, but they are expensive, and it is difficult to extend the technology beyond exactly what it was designed to do. Khalil’s device gives researchers greater control and makes it possible to run experiments over the internet.

“I no longer have to be in the lab at odd hours if I am running an experiment,” says Brandon Wong, biomedical engineering graduate student and co-inventor of eVOLVER. “I can monitor the progress and conditions in real time on my phone and if I need to modify anything, I can do it from home instead of trekking into the lab.”

Khalil, along with Wong and collaborators, recently performed three experiments with eVOLVER that would be very challenging for any other system. The first showed how eVOLVER could be used to evolve cells in the laboratory in high throughput and over long periods of time under many different specific conditions. The second experiment demonstrated that eVOLVER can be used to systematically test growth phenotypes of large cell libraries in fluctuating environments. The third and final set of experiments displayed the real-time versatility of eVOLVER by programming it to carry out complex fluid manipulations to mix and transfer media, experimental liquids, or cultures, a capability that has not been available to current continuous culture systems.

eVOLVER, which was made possible with the development of technologies, such as 3D printing and DIY software and hardware, consists of three modules: a smart sleeve; a fluidic control module; and a modular hardware infrastructure. The smart sleeve monitors and controls the culture growth with printed circuit board sensors and actuators along with other electronic parts in an aluminum casing tube, attached to a 3D-printed mount. Circuit boards can be removed or added based on which experimental parameters are needed; a lab could program a fluctuating temperature control onto a board and only plug that into eVOLVER when the experiment needs that temperature control.

“This could be a powerful platform to study the microbiome, or to evolve proteins in the laboratory in massively parallel fashion to generate new activities,” says Khalil. “It also supports our work in synthetic biology by allowing us to test and characterize synthetic genetic circuits in a more efficient and more experimentally robust way.” Creating a large network of users could lead to open-source protocols and data, which, in turn, could lead to increased reproducibility.

A Better Way to Grow Microbes