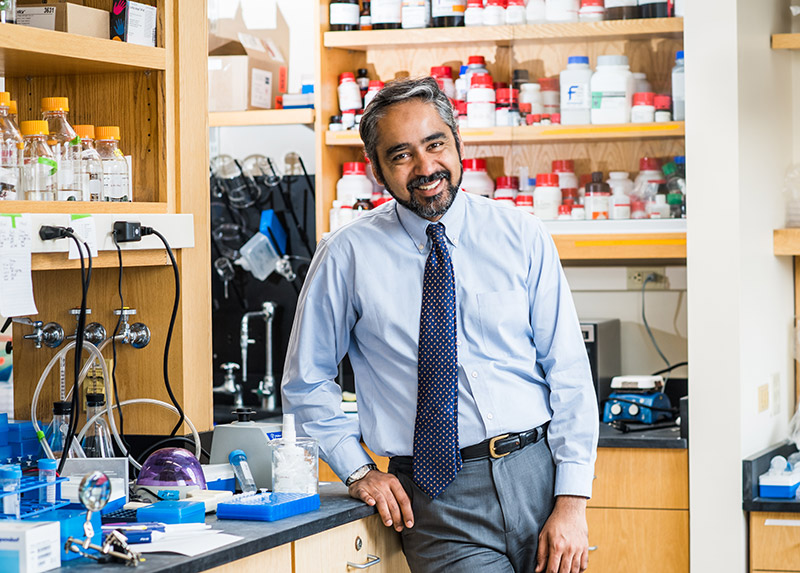 Muhammad Zaman, BU professor of biomedical engineering and international health. His new book, Bitter Pills, describes the growing problem of counterfeit and substandard drugs. “This is a problem that is truly global in every respect,” says Zaman. Photo by Jackie Ricciardi 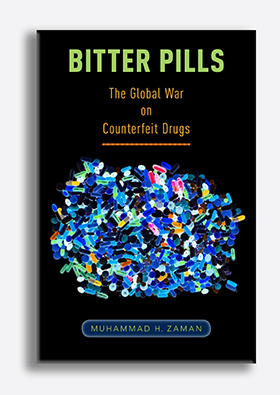 In 2012, a cluster of people in Lahore, Pakistan, started dying inexplicably. Most were mid- to low-income patients who had received free medicine at the Punjab Institute of Cardiology. Within a week, over 200 people died. An investigation found that the patients’ high blood pressure medication had been contaminated with similar-looking antimalarial ingredients. The confusion was probably unintentional—a chemical mix-up at a poorly supervised factory, but the combination of the two drugs was deadly. Such problems are increasingly common, a result of the booming global market for pharmaceuticals, a widely distributed supply chain, and spotty government oversight.

Muhammad Zaman, Boston University professor of biomedical engineering and international health, tells this story and others in his new book, Bitter Pills: The Global War on Counterfeit Drugs, which describes the rapidly increasing problem of substandard and counterfeit medicines and efforts to combat it. Zaman has been tackling the faulty-drug problem head-on for nearly a decade, developing a suitcase-size device called PharmaChk to help authorities in low-resource countries easily test a medicine’s purity. Zaman is a native of Pakistan, and the incident in Lahore prodded him to write the book, which he hopes will raise awareness of a problem that remains largely unfamiliar to the American public.

BU Research: In the prologue to the book, you recall a childhood memory of traveling across the city to a “trusted” pharmacy to buy medicine. It’s hard for many Americans to wrap their heads around that idea—we’re used to going to the closest CVS, or whatever, and expecting that the medicine will be fine.

You write that fake and substandard drugs are an age-old problem. For example, Peruvian bark was the blockbuster drug of its time for curing malaria, but most of the stuff that ended up in Europe was just a red-colored bark. So why is the problem really blowing up now, in the last 10 or 20 years?

There are several reasons. The development of medicines is an extremely distributed mechanism. Something starts in China and goes through Spain and ends up in Panama, and at times, it is completely outside the purview of regulators. Second, of course, the pharmaceutical trade has really exploded, so there is a huge opportunity there. The fact that we have complicated medicines adds to this problem.

And then the final part is the fact that pricing and access is an issue. Large Pharma guarantees quality, but charges a heavy price. Well, that makes it inaccessible for large populations in low-income countries. So where do they go? They go for cheap generic manufacturers, who guarantee a good price but don’t necessarily guarantee quality. Or if they guarantee quality, they don’t really mean it.

Have there been any big crises or incidents in the US?

Yes, several. In 2008, there was a case of heparin—a blood thinner—which was coming from China and was badly contaminated; 80 people died. People were up in arms, and there were fines imposed, and Congress said, “We’re not going to get these things from this company.” That was one case.

Sloppiness is also a problem. The New England Compounding Center caused a fungal meningitis outbreak that killed 76 people—a lot of that was just sloppiness. We see that here in the US as well.

What’s the most counterfeited drug in the world?

In terms of revenue, I would say Viagra or Lipitor. In terms of numbers, I would say probably malaria pills or antibiotics. In 2014, Interpol did a massive raid in Angola and they found 1.4 million packets of substandard malaria pills, which were enough for the entire country. Every single one of them was fake.

But I don’t know which one is the most counterfeited—nobody knows, because good data doesn’t exist. People consume bad drugs without knowing, and in many cases, nothing happens. In some cases, bad things happen, but they may already be sick. So a lot of this goes under the radar.

Some people might find it hard to feel bad for people who buy counterfeit Viagra.

It can lead to real complications. It could impact their blood pressure—remember that the original intent was cardiovascular health. So it can have really bad effects. It’s also an issue of trust. If somebody says that Pfizer makes a bad drug, then Pfizer’s business and a lot of other things are also hit.

How much of this substandard drug problem is deliberate criminal counterfeiting versus sloppiness?

I think deliberate counterfeiting is relatively small. It gets more press because it is more sensational, but I think the problem of substandard, fake, or “sloppy” is bigger. And sloppiness comes in various forms. One is cutting corners because you can get away with it—instead of carrying out ten steps of cleaning, you would carry out eight, and nobody checks. And then there is this issue of degradation because the drug was meant to be in cold chain and it’s sitting on a tarmac in the Middle East for 48 hours.

Did you come up with any recommendations or solutions?

Yes. There are several interesting models. One model is that of the aviation industry. Nobody wants to sell counterfeit aviation parts on any market; there’s a global agreement that it has to be of a certain standard that was developed by the industry and agreed on by the countries. So that’s one angle.

The other angle that I explored is that of playing to people’s goodwill and awareness, and that is the case of ivory. If you’re dealing in ivory trade today, you’re not going to get (other than black market) any reasonable country being interested in it—even China, which was the biggest importer of ivory, in 2015, announced, “No more ivory.”

The third model is trying to increase awareness among the people at the front line, meaning pharmacists. We looked at curricula in India and Pakistan and Bangladesh and Ghana, and in many places the word counterfeit or substandard wasn’t even mentioned. You can become a pharmacist without even knowing that this problem exists. And that’s terrible.

When you mention this topic to people, what’s their reaction?

They are mostly completely unaware of it. My students, for example, who are fairly well connected with the world, had no idea. And that’s quite troubling. In the US we like to believe that we are doing a reasonably good job in terms of quality, but all of these problems—of sloppiness, of import, of internet, of Viagra—you see a microcosm of all of those problems here as well. And it is only going to increase.

Muhammad Zaman and his colleague Veronika Wirtz, a Boston University associate professor of global health, will participate in a Facebook live session on counterfeit drugs on April 11, 2018, at 2:15 pm. Zaman will read from his book Bitter Pills at the Harvard Book Store in Cambridge, Ma., on April 13, 2018, at 3 pm, and at the Boston University Bookstore on April 25, 2018, at 6:30 pm.

Counterfeit Viagra Is a Problem

There are 2 comments on Counterfeit Viagra Is a Problem