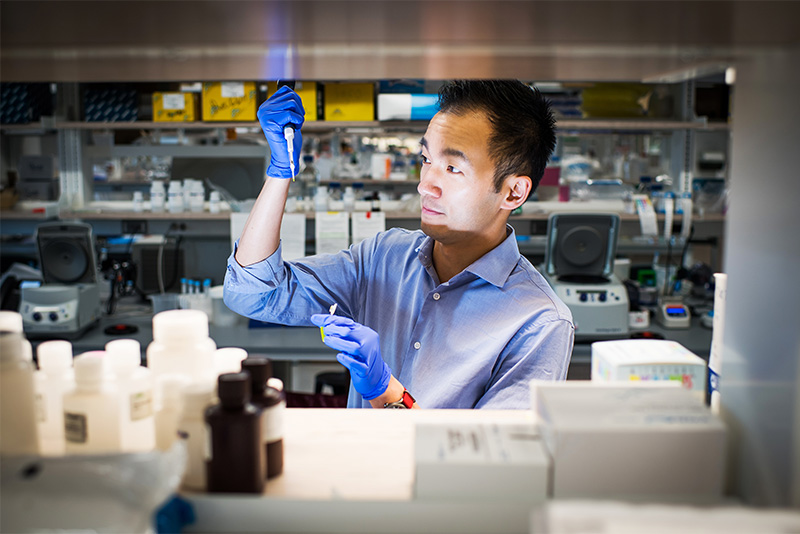 Most pharmaceutical drugs are blunt instruments against disease. Antidepressants send the whole brain swimming with serotonin. Antibiotics carpet-bomb all the bacteria in your gut, killing the good with the bad. Traditional chemotherapy attacks the fast-growing cells in your body, laying waste to tumors, but also hair follicles and bone marrow.

The field of synthetic biology—where scientists redesign existing biological systems to do new jobs—offers the promise of a more nuanced approach: cellular therapies that can work more precisely and selectively. What if, for instance, we could tweak the immune system to do our bidding—train it to attack tumors instead of saving its punch for foreign invaders? This type of “immunotherapy” is a long-standing goal of modern biology, and for some cancers, like non-Hodgkin’s lymphoma, it’s already proving effective. But for immunotherapy—and for all medicines based on living human cells—there’s a sticky problem: once you train cells to attack a tumor, or kill bacteria, or build cartilage in an arthritic knee, how do you turn them off when the job is done?

“A challenge for doctors will be to control these living entities while they are in the body, allowing them to carry out their curative properties while not letting them get out of hand,” says John Ngo, Boston University assistant professor of biomedical engineering. “This is a new paradigm, and the rules regarding how to control therapeutic cells still remain to be written.”

Ngo and his collaborators have come up with a tool that offers a means of control, and it comes from a seemingly unlikely source: the hepatitis C genome. When paired with a widely available antiviral medication, the new system offers a novel tool: a highly specific way to turn engineered cells on and off, with an existing, proven medication. The team published their findings in the July edition of Nature Methods.

“The big question is, can we engineer cells to do what we want for therapeutic applications,” says Wilson Wong, an assistant professor of biomedical engineering who shared a Boston University Ignition Award for related research with Ngo. Wong’s ultimate goal is to remove immune system T cells from patients, genetically engineer them to find cancer, and then return them to a patient’s body, controlling them with a system like Ngo’s. “What John has developed here is a drug-controllable system,” says Wong. “You can change when you add the drug, how long you need the therapy to be working, and how strong you need the response to be.”

“This work shows that we can repurpose existing medicines to control therapeutic cells in a way that is not only selective, but also efficient from the drug-development standpoint, because these drugs already exist,” says Ngo. “A convenient benefit of the system is that we already know exactly how long these drugs stick around for.”

Scientists have already developed strategies for controlling engineered cells, using things like plant hormones, human proteins, and antibiotics. But these strategies have flaws. For instance, overuse of antibiotics can contribute to antibiotic resistance, and also indiscriminately kill bacteria in a patient’s gut. “We know that those gut bacteria actually influence how a lot of cancer therapies work, both the cell therapies and the basic chemotherapeutics,” says Ngo. “So ideally, we’d like to have those systems in place.”

Ngo and his team, which included Elliot Tague (ENG’21), Hannah Dotson (ENG’21), Shannon Tunney (ENG’21), and D. Christopher Sloas (ENG’21), started to look for a better way. They wanted to engineer a system that would interact with a safe, predictable, widely available medication. And they wanted that medication to bind with proteins that don’t usually exist in humans, so it wouldn’t wreak havoc in a person’s body.

For the key to the system, they settled on a protease—a molecular “scissors”—that cuts up other proteins. The particular protease they chose comes from the hepatitis C virus, and is usually found in the middle of a longer molecule. When activated, the protease cuts the long molecule up into tiny bits. Ngo offers a vivid metaphor: “If my head is the part that does the cutting, it bites off my arms at my shoulders to release them.” In hepatitis C, the process is how the virus replicates and spreads in the body. But antiviral drugs stop the protease in its tracks.

Knowing the mechanism, Ngo and his team wondered how they could use it for their own ends.

They took the isolated protease molecule and attached new “arms” to either end, creating what Ngo called a “Frankenstein protein.” The arms, when linked to the protease, act as transcription factors that tell a gene to turn on or off. Chopped off, they cease to function. By adding or removing the antiviral drug, the researchers told the protease to cut, or not. They called the whole system “LInC” for Ligand Inducible Connection, meaning that the drug can command the long protein to stay whole, or chop itself into pieces.

The system is modular, and can be used to build and disconnect different types of molecules that turn different genes on and off. Ngo and Wong hope the system will offer a new tool for cancer researchers, and may eventually lead to tailored cancer therapies. “Everybody is racing toward getting a more controllable system,” says Wong.

“The system is very modular and very generalizable,” says Ngo. “We don’t know what type of systems will be the most useful yet in terms of having genes turn on or off, so having tools that can be used to engineer drug control into lots of different cell features, will be very important. I think if we’re creative enough, we can figure out how to control essentially any protein, using this type of technology.”

Turning Cells On and Off