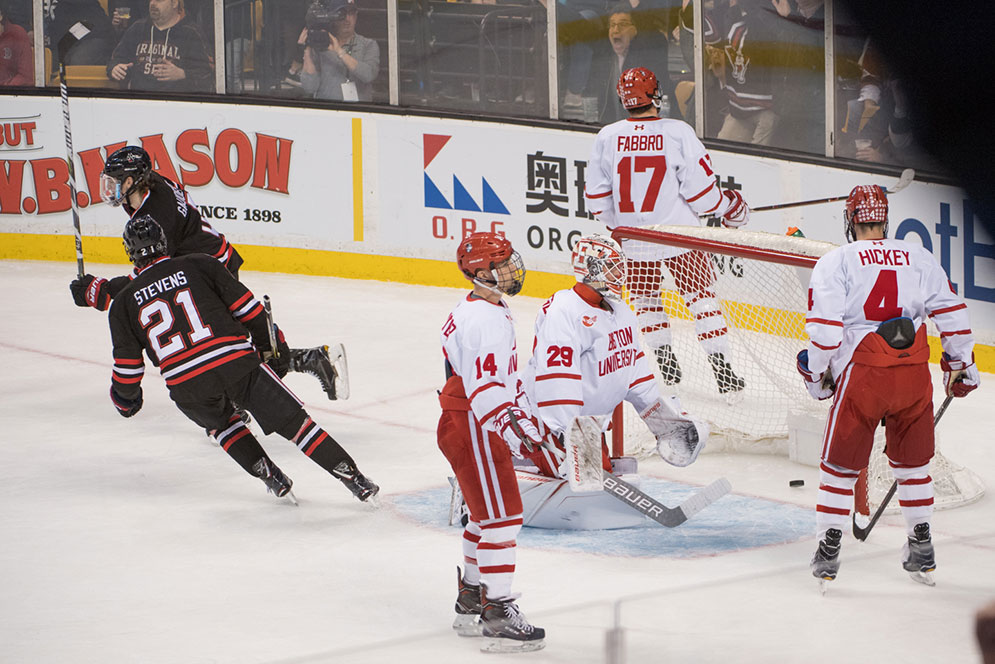 Despite his strong performance in the semifinal game, goalie Jake Oettinger (CGS’18) struggled to keep up against Northeastern, whose five goals gave them their first Beanpot title in three decades Monday night. Photo by Cydney Scott

The BU men’s ice hockey Terriers and the Northeastern Huskies entered Monday night’s 66th Beanpot championship game with the same goal: to break 30. The 20th-ranked Terriers were hoping to add to their Beanpot-record 30 titles, while 12th-ranked Northeastern was marking 30 years since its last Beanpot title win. At the end of the night, it was the Huskies who came out on top, beating the Terriers, 5-2, to take home only their fifth Beanpot trophy in program history.

Even in the stands, the battle began one-sided: Northeastern fans easily outnumbered and outshouted the Dog Pound—at one point in the third period cheering, “We can’t hear you.” But on the ice, it was the Terriers who first silenced the Huskies crowd with what looked to be the game’s first goal: a give-and-go between Drew Melanson (MET’18) and Brady Tkachuk (CGS’19). But the goal was called off after a review determined the play was a goaltender interference.

BU continued to pressure the Huskies as Terrier scoring leader Bobo Carpenter (CGS’17, COM’19) had only Northeastern defenseman Ryan Shea between him and goaltender Cayden Primeau. But Shea won the battle—successfully wrapping his stick around Carpenter to stop the puck. 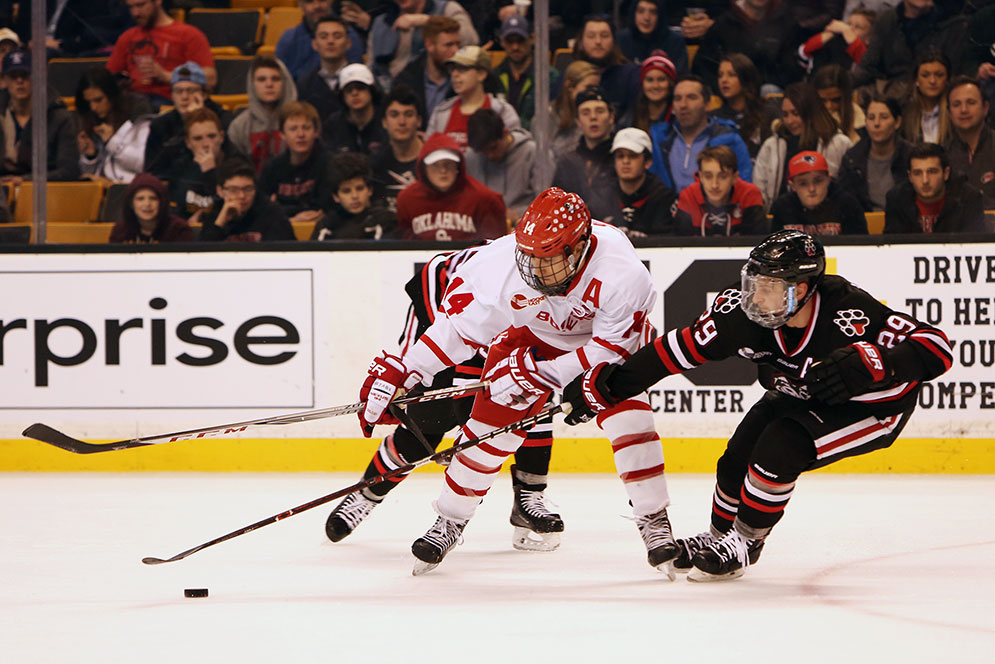 Bobo Carpenter (CGS’17, COM’19) and Northeastern’s Garrett Cecere in a battle for the puck. Photo by Jake Belcher

The Terriers weren’t at full strength, and they certainly missed two of their top scorers: Jordan Greenway (CGS’17, CAS’19), who is on hiatus, playing for Team USA at the 2018 PyeongChang Winter Olympics, and Patrick Harper (CGS’18), who missed the championship game because of illness.

As he did in last Monday’s semifinal game, Logan Cockerill (CGS’19) rose to the occasion, once again scoring the first goal of the evening. The forward pulled a move out of his bag of tricks, slipping the puck through his own legs while behind the net. The puck deflected off Primeau’s stick and gave the Terriers their first score.

But the momentum quickly ended for BU as Northeastern responded with back-to-back power play goals.

First, Huskies captain Nolan Stevens tied the game with a snake-esque goal—dodging around the reach of defenseman Chad Krys (CAS’20) by gliding his stick to the right, then switching over to the left past goaltender Jake Oettinger (CGS’18) for the Huskies goal.

Then it was time for the most dangerous offensive duo in the country: Northeastern forward Dylan Sikura’s wrist shot from the right led to a rebound goal by Adam Gaudette, the nation’s scoring leader, on the other side. 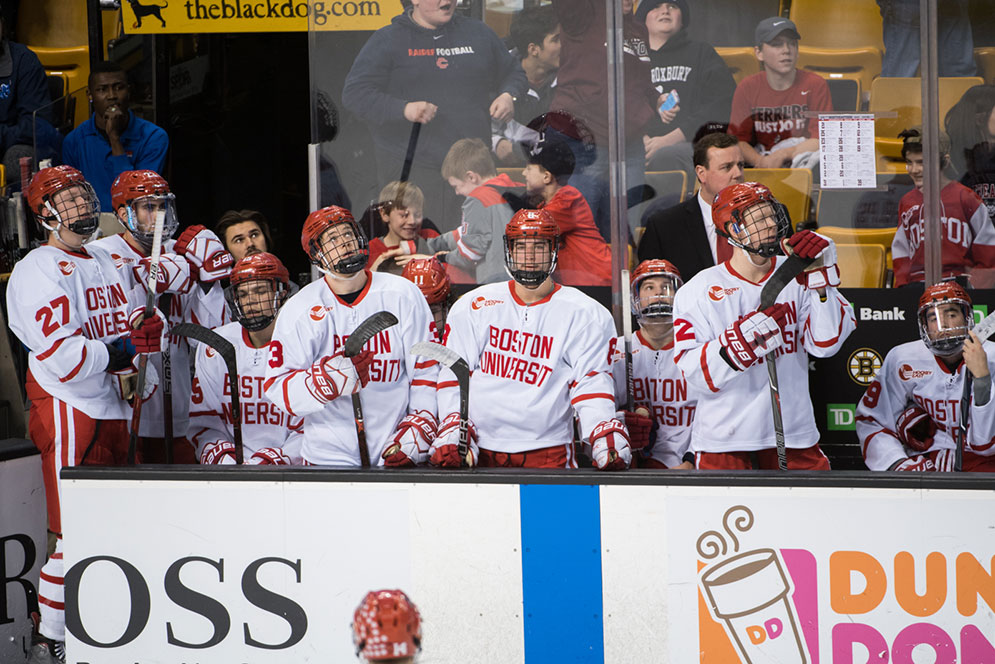 In the second frame, Northeastern completely dominated. Primeau, who went on to win the Eberly Award, given to the tournament’s top goaltender, took over. At one point, after a tussle between Northeastern’s Patrick Schule and Dante Fabbro (CGS’18) sent the two off the ice, Hank Crone (CGS’19) tried to turn back the momentum with a series of moves to get himself open, but Primeau easily stopped the attempt.

The next two goals came from Northeastern. Defenseman Trevor Owens found the top right corner of the net with a wrist shot to bring the lead up to 3-1. And while the Terriers’ efforts were admirable, none—not even an attempt by Shane Bowers (CGS’19) right in front of the goal—found the back of the net.

The Huskies power duo struck once again: Sikura crossed the puck to Gaudette, who hit it off Oettinger’s stick to ice the game with his second power play goal.

By the final period, the game had settled down. Despite BU’s goal with 2:40 left, a shot at a comeback was not looking likely. And with just 30 seconds to go, Gaudette completed his hat trick on an open net and brought the final score to 5-2, clinching the tournament’s MVP.

With the Beanpot behind them, the Terriers now focus on what remains of Hockey East regular season play. After two games on the road, against UConn this Friday and Merrimack Saturday, they will host the University of Vermont in back-to-back games to finish the season.