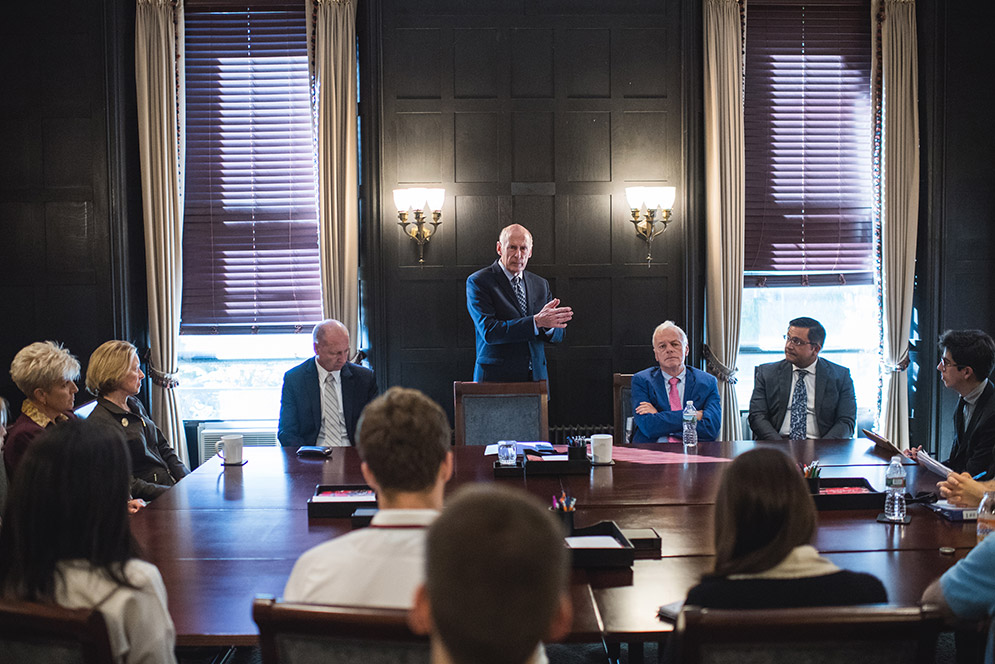 The man responsible for briefing President Donald Trump daily on national and global security issues told an audience at the Frederick S. Pardee School of Global Studies Friday that he doesn’t sugarcoat the facts.

Whether the topic is Russia, North Korea, or a homegrown security threat, Dan Coats, director of national intelligence, said his job is to give the president an impartial viewpoint.

“You have to stick with the facts, because it’s very easy to become politicized,” Coats said. “I’ve got to be very careful, because I’ve had a lifetime of policy-shaping.”

A former Republican congressman and senator from Indiana, with a reputation as a moderate conservative, Coats had been US ambassador to Germany from 2001 to 2005 under President George W. Bush. He was named to his current cabinet post in March. Coats told the audience that his role now is a big one, involving coordinating intelligence from 16 government agencies, including the Central Intelligence Agency, the National Security Agency, and the State Department, to ensure that the president has an up to-the-moment view of any threats to national security.

He said that the volume of threats to the country’s national security is not the only concern, but it’s their diversity was as well: from cybersecurity to problems in Russia and the Middle East to a potential nuclear missile launch by North Korea. He told listeners that his meetings with the president have recently started to take 45 minutes to an hour, not the 12 to 15 minutes typically budgeted.

“Obviously North Korea is occupying a lot of time in the Oval Office,” Coats said.

Without citing details, he did say he has been in the intimidating position of having to give the president information he may not like or want to hear. Trump “has been fully accepting of that,” he noted, taking in a lot of information, asking questions, and holding his security advisors accountable. (The CIA director, the vice president, and the national security advisor also usually attend the daily briefings.)

No stranger to crisis situations, Coats had been on the job as ambassador to Germany just days when the terrorist attacks of 9/11 occurred. While living in Berlin, he and his wife had come to know Joseph Wippl, then a CIA officer and now a Pardee School of Global Studies and College of Arts & Sciences professor of the practice of international relations.

Wippl said he invited Coats to speak with students enrolled in two of his seminars, Intelligence, Congress and National Security and Strategic Problems in Intelligence, because of his rich experience and informed insights.

“No one has ever done all those things,” Wippl said of Coats’ experience as a diplomat, politician, and top national security expert. “We often talk about public service. Well, he’s done it.”

As part of his new role, Coats is responsible for overseeing the intelligence agencies that are examining Russian meddling in the 2016 presidential election. Just three years ago, he himself was banned from Russia by officials at the Kremlin in retaliation for his support for a series of US sanctions against Moscow after it annexed the Crimea region of Ukraine.

Coats is the fifth person to hold the director of national intelligence position, created at the recommendation of the 9/11 Commission Report, which found inadequate sharing of intelligence between national security agencies to identify potential threats to US security.

Trump had advocated eliminating or reducing the power of the national intelligence director during his campaign and in the early days of his presidency. Coats said he made it clear to the president when he accepted the role that getting the best, most accurate, and timely information would be his mission, and he told Trump early on in his tenure that the information would not be politically distorted.

“It helps to have been around a while. I have no interest in building a career or positioning myself for another role,” he said. “I’ve tried to retire three times.”

Coats said he will be testifying before Congress soon on one of the key issues facing the nation’s intelligence community: the administration’s effort to renew the Foreign Intelligence Surveillance Act, which expires at the end of this year. The act permits collection of electronic communications of foreigners who are deemed potential threats to national security.

He said that weighing privacy concerns against surveillance needs is an important debate, but added that Google probably already knows more about most Americans than any government surveillance program. He added that currently in this country there’s a deep distrust of government and other institutions by the younger generation, but he urged his audience to consider a life of public service. “I want to encourage people not to just write this off in terms of what kind of a career you can have,” Coats said.

Avery Hall (GRS’19) said he was reassured to hear Coats talk about the importance of diplomacy and the importance of listening to foreign perspectives. The 23-year-old graduate student studying diplomacy said he had concerns when Trump made comments earlier this year that he was considering eliminating the briefings by the  national intelligence director. Such intelligence often makes diplomacy possible, Hall said, adding, “I was relieved to see that the president is a very big consumer of intelligence information. That made me feel good.”

Before Coats spoke, Adil Najam, dean of the Pardee School, noted that since many of the students in the program will pursue jobs with the State Department or other government agencies, the chance to listen to the director and ask questions would provide valuable perspective.

“It is very important that Pardee School students are able to meet and interact with policy leaders in various fields,” Najam said, pointing to recent appearances by the secretary-general of the National Assembly of South Korea and the prime minister of Uganda hosted by the school. Coats’ visit “gives our students a unique and privileged opportunity to hear about how policy at the highest level, and on the most pressing security issues, actually works.”