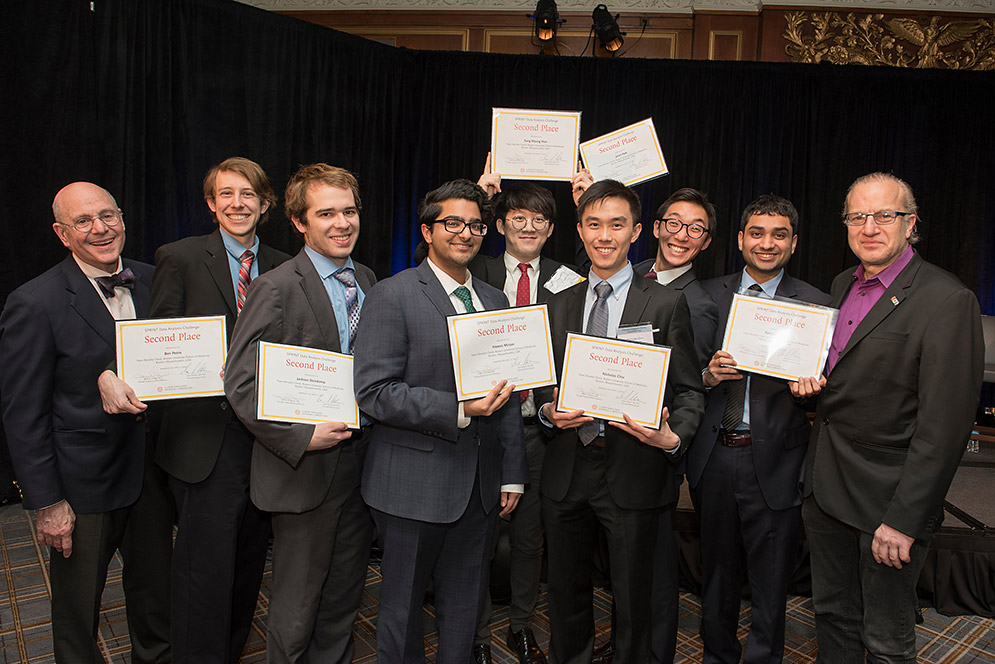 “This is impossible—how did this happen?”

That was Ben Petrie’s reaction when he heard that he and six other second-year School of Medicine students had beaten out 141 teams of academic researchers and physician scientists—from medical schools at Harvard, Yale, Columbia, Stanford, and other institutions—to take second place in a New England Journal of Medicine (NEJM) contest.

The competition challenged entrants to analyze a landmark blood pressure management study and come up with new findings that could be translated into improved care for patients. With 200 teams getting through the initial qualifying rounds, the contest drew scientists from 107 institutions (including, here in Boston, Massachusetts General Hospital and Brigham and Women’s Hospital), labs, and companies in 26 countries.

“We never thought we’d place,” says BU team leader Rahul Aggarwal (MED’19), who recruited six friends who share his passion for open data and medicine. They viewed the contest, says Aggarwal, who is especially fascinated by cardiology, as a chance “to do what we’re passionate about, to think in our own way, to generate our own questions.”

“They were functioning as physician scientists,” says Douglas Hughes, a MED professor of psychiatry and associate dean for academic affairs. “It’s a phenomenal feat.”

The contest’s winning team was headed by Noa Dagan, chief data officer and researcher at Clalit Research Institute, in Tel Aviv, and included physician-scientists, epidemiologists and biostatisticians. Leading the third place team was Sanjay Basu, a Stanford University assistant professor of medicine, who runs his own lab, practices as a primary care physician—and, Aggarwal notes, “he’s a Rhodes scholar.”

The winners were selected by a panel of 15 judges comprising biostatisticians, cardiologists, physician-scientists, researchers who run clinical trials, and clinical trial participants. Along with the other winners, Aggarwal presented the BU team’s findings on April 3 at an NEJM Sharing Clinical Trial Data Summit in Boston, which was live-streamed on the web. As the second-place winners, the MED students received a certificate and a cash prize of $2,500, which they will use to offset the cost of submitting their work to journals for publication, Aggarwal says.

“This group’s enthusiasm, care, and creativity were evident, and it’s this next generation of physicians that we want to encourage to think critically and expansively,” says contest cochair Jeffrey M. Drazen, NEJM editor in chief.

Contest entrants analyzed the Systolic Blood Pressure Intervention Trial (SPRINT), which was funded primarily by the National Institutes of Health (NIH) and involved 9,361 people with elevated blood pressure and increased risk of cardiovascular disease. The data became available in early November, and the contest entry deadline was February 14. As a team of students—and without even a faculty supervisor—it took the BU group until the end of December just to get permission to access the data from the National Heart, Lung, and Blood Institute (NHLBI).

“I guess the takeaway is that you don’t have to know the most to ask a simple but important question.” —Nicholas Chiu (MED’19)

“We were getting kind of worried about it,” says Aggarwal. When he approached BU’s Institutional Review Board (IRB) for the necessary approval, he says, “everyone was, like, ‘Students don’t usually do this.’”

Perhaps not, but as Karen Antman, dean of MED and provost of the Medical Campus, puts it: “Our second-year students are exceptional. To receive second place in such a prestigious competition, in a field that includes accomplished physician-scientists, is quite an honor and we congratulate them on this achievement.”

Aggarwal turned for help to Suzanne Sarfaty (CAS’84, MED’88), a MED associate professor of medicine and assistant dean for academic affairs, who signed the necessary IRB form—and in response to an additional request from the NHLBI, then enlisted Antman to sign as well.

Chiu says reviewing the literature provided the team with “a sense of what had been studied before, what conclusions were well established, and what areas in hypertension management were in need of better understanding.”

It helped, says Park, that they had just completed MED courses on cardiology and nephrology.

The original SPRINT trial was intended to evaluate whether there was any benefit or harm from aiming for a systolic blood pressure (the pressure in arteries as the heart contracts) lower than 140 millimeters of mercury (mmHg) in people with elevated blood pressure and increased risk of cardiovascular disease. The trial was halted in 2015, five years after it began enrolling patients, when researchers determined that study subjects who were receiving intensive therapy were 43 percent less likely to die from heart attack, stroke, or other cardiovascular causes than those on the standard regimen.

Delving deeper, Chiu says, he and his teammates realized that relatively few studies had been done on blood pressure management in CKD patients. They also realized that if they focused specifically on CKD patients in the SPRINT trial (which did not thoroughly investigate the outcomes of intensive blood pressure management on CKD patients), they would have the largest study in the existing literature, with 2,646 patients. And, team members agreed, that would be a project offering clinical usefulness.

The team—they call themselves Renality Check—met weekly, for three- or four-hour evening sessions. “Part of what made it so exciting was that we were all friends,” Petrie says. Instead of playing video games on Friday night, they would “hang out and engage in data analysis.”

On March 5, Aggarwal was astonished when he opened the congratulatory NEJM email. In a state of disbelief, and busy with medical school, he and his teammates did not share their news widely on campus, but they did send an email to Sarfaty thanking her for her help.

1) Blood pressure for CKD patients was harder to manage than for the control population.

The third conclusion is striking, says Hughes. “They’re actually challenging the findings of this huge study—that the systolic blood pressure of these patients should be so intensively managed. That’s a pretty dramatic finding for second year medical students. They made a really good observation. They backed it up with a logical argument and evidence from the study, and they’ve created a very good argument for another recommendation out of the same data. This is exceptional.”

Says Nicholas Chiu (MED’19): “I guess the takeaway is that you don’t have to know the most to ask a simple but important question.”