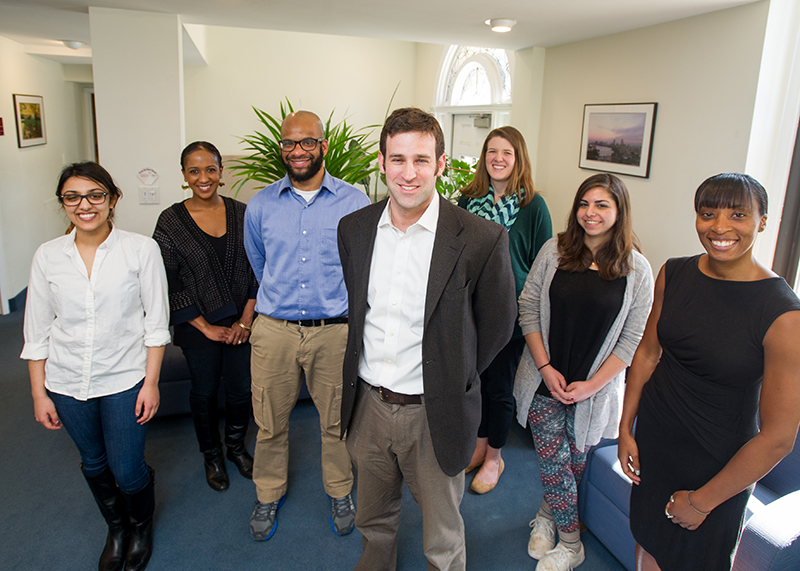 The results were in. Studies showed young people of color fared better in school and society if they knew how to analyze, navigate, and challenge racism and racial inequality. But what role could secondary schools play in fostering this so-called “critical consciousness?” That’s what Scott Seider, a researcher at Boston University’s School of Education (SED), and his colleagues at Harvard and Simmons set out to learn.

And that was before Charlottesville.

At a time when the nation’s worst racial attitudes have bubbled to the surface, Seider’s team is deep in a multi-year look at efforts to build critical consciousness at selected urban high schools. They’ve begun to publish their findings.

“Racial injustice in the United States is, of course, nothing new,” says Seider, who is an associate professor of education and former English and literacy teacher in the Boston Public Schools. “But the combination of mobile phone video cameras, the Black Lives Matter movement, the election of President Trump—and now, Charlottesville—has made some of those injustices even more evident to more Americans. Schools are embracing the idea that they have a role to play in preparing their students to navigate and challenge this injustice, and we believe this study will strengthen their capacity to do that work.”

Seider has spent nearly 15 years studying the civic and character development of adolescents. His book, Character Compass: How Powerful School Culture Can Point Students Toward Success (Harvard Education Press, 2012), won the moral development and education outstanding book award from the American Educational Research Association. “A decade ago,” he says, “new research on character development got educators interested in the idea that, in addition to academic skills, kids also need internal qualities such as perseverance and resilience in order to be successful. This conversation had its value but also its limitations.” Now, he says, educators are starting to talk again about the critical consciousness that kids need to contend with external forces that can be obstacles to their success, forces such as systemic racism.

Critical consciousness has two parts, says Seider. “It’s both awareness of oppressive external forces and feeling a sense of efficacy about how to navigate and challenge those forces.” A number of recent studies have shown that students of color with this mindset are more resilient, do better in school, enroll in college at higher rates, and are more politically and socially engaged citizens, he says.

“The reasoning is that if you don’t have the awareness of societal forces, you’re going to see the obstacles you’re contending with as your fault,” he says. “But if you have the ability to critically analyze society—if you can say, ‘Wait a minute, there’s a long history of racial inequity embedded in what is happening here’—then you’ll be less likely to blame yourself and more likely to see yourself as engaged in a collective struggle for social justice.”

As Seider explains, the term “critical consciousness” was coined in the 1970s by Brazilian philosopher and educator Paulo Freire. Freire offered specific ideas about how to foster critical consciousness, but his work focused on teaching Brazilian migrant workers under a military dictatorship how to both “read the word,” and “read the world,” as he wrote, and empowering them to challenge the oppressive social forces that shaped their lives.

Broadly speaking, the BU-Harvard-Simmons research team aims to find out how Freire’s work informs the work of schools serving youth of color in 21st-century United States. Which of Freire’s ideas translate to a different era and context? What is being adapted or updated?

Funded by grants from the National Academy of Education, the John Templeton Foundation, and the Spencer Foundation, Seider and his colleagues have followed more than 500 students of color in the high school class of 2017 over the past four years, from the ninth grade through senior year, at six charter high schools in five northeastern cities that aim to foster students’ critical consciousness as a part of their school mission. The students are 48 percent African American, 20 percent Latino, and 31 percent multiracial.

The researchers believe their study is the largest to date that looks at the role of schools in fostering critical consciousness. They have surveyed all the students with questionnaires and interviewed and re-interviewed 12 randomly chosen students at each of the schools. They also spent roughly 25 days per year at each school, watching teachers, administrators, and students in action. They have published their preliminary findings in a number of academic journals, including Applied Developmental Science, Journal of Youth and Adolescence, and Teachers College Record.

The study of critical consciousness and education is a relatively new field, says Matthew Diemer, an associate professor at the University of Michigan School of Education, who has spent more than a decade analyzing critical consciousness in school, college, work, and civic and political institutions. “Scott’s contribution is that he’s spending nuanced time on the ground, in schools, seeing how teachers enact this,” says Diemer, who is a developmental psychologist. “He’s helping us see as a field: how do we implement these things?”

Seider’s lead collaborators on the study are Daren Graves, an associate professor at the Simmons School of Social Work who focuses on racial identity development in black adolescents; Aaliyah El-Amin, a lecturer at the Harvard Graduate School of Education who studies emancipatory schooling practices for black youth; and Lauren Kelly, a former SED postdoc who is now an assistant professor of urban teacher education at the Rutgers Graduate School of Education and who looks at how teachers can draw on students’ cultures and identities to engage them in analyzing and challenging their social conditions.

Seider’s team likes what they have seen so far. “I hope that schools can take away that they have a role in preparing students to not just live in the world as it is but also—and more importantly, for me—to change it,” says El-Amin. “Some of the schools we observed are thinking creatively about this possibility. Principals and teachers are creating space for young people to meaningfully engage with their socio-political environment and dismantle injustice.”

The schools being studied are all charter high schools, but they take very different approaches to fostering their students’ critical consciousness. For example, one school in the study uses an inquiry-based approach to learning. A second school works on developing “habits of mind and heart,” including analytical skills and empathy. A third school takes what is known as a “no-excuses” approach that emphasizes preparation for college, a strict disciplinary environment, and instruction in the social skills of school.

Seider says his team focused on charter schools because they have more flexibility in what and how they teach—and in how they approach critical consciousness—than traditional public schools generally do. To honor privacy, the researchers use pseudonyms for both the schools and the students.

Here are some examples from the first three years of data (the researchers are still analyzing data collected during students’ senior year):

Students at the “habits of mind and heart” school showed particularly high growth over three years of high school in their understanding of systemic racism. One explanation for this growth, Seider says, is that school leaders regularly disrupted the academic schedule in order to make time for students to discuss police violence and other cases of racial injustice dominating news and social media.

One student described to researchers the school-wide community meeting that followed the killings of Michael Brown and Eric Garner by white police officers: “We got to be able to have our voices be heard by the teachers and our fellow classmates. So we talked about it, and we kind of got a better understanding of what happened, and the whole story behind it. It kind of gave me the opportunity to actually speak my mind…I usually don’t really speak my mind quite too often, but when I finally got the opportunity to, I was finally able to say, ‘I don’t like the way people are taking advantage of their power.’”

Students at a “no-excuses school” demonstrated impressive growth in their confidence in navigating settings such as predominantly white universities where racial discrimination and microaggressions may be prevalent. One explanation for this growth is that students at no-excuses schools were required to take an intensive “College Readiness” class each year of high school that took on these issues, says Seider.

One no-excuses student explained: “In College Readiness, see, we learned about how certain things like financial aid and ethnicity and being a first-timer of your family to go to college…can really affect your experience there, because it’s caused lots of people to leave college because they can’t find a way to fit in, so I’m trying to find a place where I actually socialize with other people and get used to the life living there, so I can be successful in my four years of college.”

Students at the inquiry-based school showed substantial growth in their commitment to civic engagement and activism around issues of inequality. Seider says a possible explanation for this high growth can be found in the school’s humanities curriculum, which focused each year on historical events such as apartheid South Africa, the Haitian revolution, and the American labor movements—as well as the tactics that people involved in these movements had used to resist injustice.

Seider’s team has also written about the importance of students drawing on all the different dimensions of critical consciousness.

One example of such a student is Terrence, an African American junior at a no-excuses school, who described to researchers his involvement through his school in creating a podcast about his majority-black city and its long history of struggle and activism: “I wanted opportunities to speak openly with my peers about the things that we see every day. Crime rates, drug rates, riots. I had the chance to put the past in conversation with the future. I watched a documentary that showed how police brutality and issues like that have been going on for a long time….and that black children back in the day didn’t have the opportunity to come to a school like [mine]. Sometimes I want to leave so bad, but I know deep down in my heart why I’m here. So I buckle down and do my homework…I see the bigger picture.” Seider and his team discussed Terrence’s growing critical consciousness in a February 2017 paper published in Kappan, the journal of Phi Delta Kappa, whose members include 25,000 educators and school leaders.

The voices of the students—their passion for what they are learning about how to navigate and challenge the world—is one of the most striking aspects of the study. Kelly says she was impressed with how socially aware many of the students are “and how important that awareness is to their survival and success.”

At the end of the school year in spring 2018, the team will send out a final round of surveys to all the students. They will also conduct final interviews with the students about how the critical consciousness work they did in high school has influenced their experience in college—and in the working world.

BU, Other Researchers: Can Critical Consciousness Close the Opportunity Gap?

BU, Other Researchers: Can Critical Consciousness Close the Opportunity Gap?
0
share this