2017 Commencement speaker Bonnie Hammer (CGS’69, COM’71, SED’75, Hon.’17) told BU graduates to listen to views other than their own. Watch the entire speech of the NBCUniversal Cable Entertainment Group chair in the video above. Video by BU Productions. Photo by Chris McIntosh

Pairing the names Odysseus and Kim Kardashian in the same sentence seems unlikely, but Bonnie Hammer, the Hollywood Reporter’s “Most Powerful Woman in Entertainment,” strung them together in her BU Commencement speech Sunday, offering a storyteller’s advice on how the graduates might construct the narrative of a successful postcollege life.

“When you leave today, you’ll begin to write the most powerful, most meaningful, and most entertaining story of your life. It’s the story of you,” said Hammer (CGS’69, COM’71, SED’75, Hon.’17), chair of NBCUniversal Cable Entertainment Group.

The BU graduates gave Hammer a standing ovation, but they reserved their loudest cheers for Red Sox designated hitter David Ortiz (Hon.’17), one of this year’s five honorary degree recipients. The slugger got three rounds of applause before he even mounted the podium, as the giant video screen showed him in the entering procession. And his four-word acknowledgement after President Robert A. Brown conferred on him an honorary Doctor of Humane Letters—“Thank you very much”—got even more thunderous applause.

Hammer plumbed her career, which has involved oversight of a cable cornucopia that includes USA Network, Syfy, E! Entertainment, and Universal Cable Productions, for ideas on how the graduates might script their life stories, starting with the need for “unforgettable characters, from Odysseus to Kim Kardashian.” Mentors are among the necessary characters in real life, she said, citing Barry Diller, who was her boss at USA and Syfy years ago.

Diller, she recalled, once emailed her over an entire weekend about a Syfy show she oversaw featuring a psychic. If he truly was psychic, why was he on a science fiction channel? Diller asked. “And if he wasn’t real, why the hell were we in business with him at all?”

“He wanted to understand just what I had decided, and how,” she said. “My facts, my logic, my entire thought process. He forced me to think outside my comfort zone, and create a watertight argument that I had to own.” By 11 p.m. that Sunday, the back-and-forth had reinforced her view that because no one can prove psychics are real, Syfy was the appropriate home for the show. Diller’s final email read, “Okay, your arguments win.”

“To this day, those are some of the best four words I’ve ever heard,” Hammer told the BU crowd.

Conflict, an inevitable part of any story, teaches a person how to speak up for herself, she said, recounting her leadership of World Wrestling Entertainment, a field she knew nothing about. Introducing herself at a meeting with “strangers who had necks bigger than my waist,” she readily acknowledged, and deferred to, their knowledge of wrestling and its audience, while offering her knowledge of TV storytelling.

“That very first conversation, which was honest and authentic on both sides, became the basis for an amazing 20-year work relationship and deep friendship,” she said. “So find your voice. Know when to use it. And just as important, when not to use it.”

Other parts of life can’t be foreseen, Hammer said: the anti-Semitism she experienced as a Jewish student in Kansas, and later when her half-Malaysian stepdaughter was told by an elementary school classmate that her skin was too dark. The lesson of such times resonates today, she said: “In this moment of polarization, it’s more important than ever that we pay attention to each other’s stories.”

“Listen to podcasts that make you angry,” she told the graduates. “Read things that make you uncomfortable. Talk with—not at—people with different points of view.” 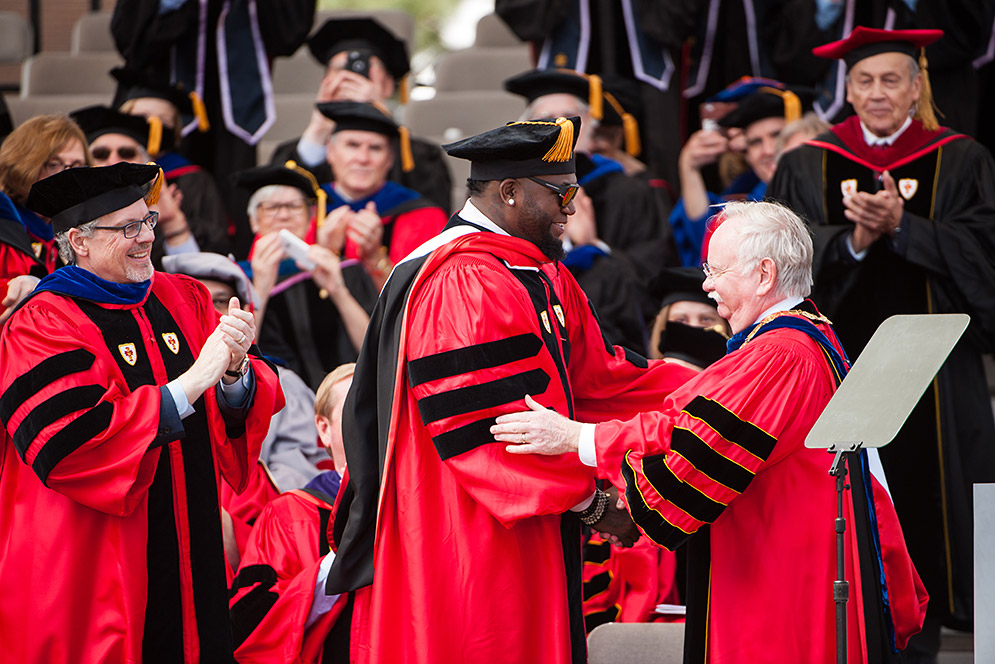 Former Red Sox hitter David Ortiz (Hon.’17) received not only an honorary degree at BU’s 144th Commencement, but also the most cheers of the day. The retired Boston slugger will have his number, 34, retired at Fenway Park June 23. Photo by Jake Belcher

Student speaker Maxwell T. Robidoux (CAS’17), one of this year’s 6,530 graduates, also touched on current divisions, in America and elsewhere, lamenting that the critical thinking and fidelity to evidence that the University has instilled in him “are under siege” in 2017.

“Let the historical record show that we, the Boston University Class of 2017, did not succumb to complacency,” he said, “but instead rejected the concept of a posttruth world with all of our collective tenacity, intellectual capacity, and human decency.”

BU’s first Commencement in the age of President Trump saw several allusions to walls, real and metaphorical, in contemporary America. Wayne Positan (CAS’70), president of the BU Alumni Council, welcomed the newest alumni by recounting some of the history he’s seen in his life, including the Berlin Wall. “I saw it come down,” he said, getting applause when he added, “That’s what happens to walls.”

Brown presented Hammer with an honorary Doctor of Humane Letters. He awarded the same degree to Ortiz and to Jeanne Knox (Hon.’17), chair of the BU Parents Leadership Council. The other honorary degree recipients, Nobel laureate and climate change scientist Mario J. Molina (Hon.’17) and BU overseer, trustee emeritus, and former Board of Trustees chair Robert Knox (CAS’74, Questrom’75, Hon.’17) each received a Doctor of Laws.

The president also awarded the University’s highest teaching honors: the 2017 Metcalf Cup and Prize for Excellence in Teaching went to Naomi Mann, a School of Law clinical associate professor of law, and a Metcalf Award for Excellence in Teaching was given to both Sophie Godley (SPH’17), a School of Public Health clinical assistant professor of community health sciences, and Gary Lawson, LAW’s Philip S. Beck Professor of Law.

A Storyteller Advises BU Grads to Write Their Own Life Story