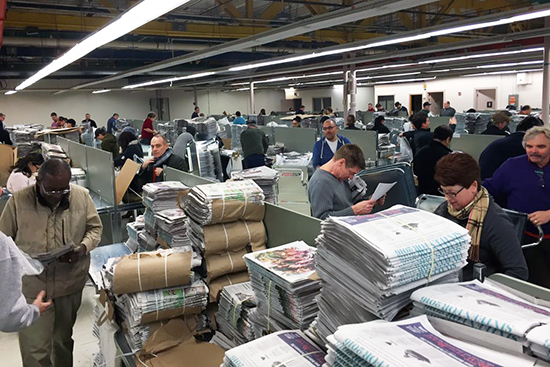 When Red Sox owner John Henry bought the Boston Globe three years ago and invested prodigiously in new online news sites, observers wondered if a savvy businessman could rescue not just the paper—reeling from years of buyouts, cutbacks, and a near-shutdown by its former owner, the New York Times—but print journalism itself. (Henry subsequently appointed himself publisher.)

The last two weeks have not been kind, as the paper’s hiring of a new distributor for its print edition, starting December 28, has snarled home deliveries. The new delivery service, California-based ACI Media Group, said that on the worst day during the snafu, 10 percent of Globe subscribers didn’t get their paper.

The Globe said it hired ACI to improve service after research showed that half of its subscription cancellations resulted from poor home delivery. Yet the new delivery service has been so disastrous that Globe reporters and other employees resorted to delivering the Sunday, January 3, paper themselves, and the Globe rehired its old distributor to help ACI with deliveries for three years.

Meanwhile, at least 2,000 subscribers have cancelled their Globe subscriptions as a result of the delivery debacle, which the parties blame both on a shortage of drivers and software that mapped out paper routes confusingly. Of course, those problems don’t afflict online news, and with digital clearly the future—and print ad revenue relentlessly dropping—newspapers have begun experimenting with alternatives to daily print publication. Some (for example, the Christian Science Monitor and seattlepi.com, formerly the Seattle Post-Intelligencer) publish online only; others publish in print only a few days each week, while posting stories online daily.

Yet the majority maintain print editions for two reasons, starting with money. Newspapers make most of their money off advertising, and with so many online sites competing for advertisers’ dollars, the market rate you can charge there is small, compared to print. While print advertising revenue is dropping and online revenue rising, the growth in the latter is still too puny to cover the loss of the former. And most newspaper readers (56 percent) still read the paper in print only, according to the Pew Research Center.

Does the Globe’s embarrassment suggest lessons about how newspapers should reach readers in the future? BU Today asked John Carroll, assistant professor of mass communication at the College of Communication, media analyst for NPR’s Here & Now, and senior news analyst at WBUR. Carroll, a nine-time Emmy award winner, is a former executive producer and news industry analyst for WGBH-TV in Boston and radio commentator for WGBH-FM. He is also a former columnist for the Boston Globe and Adweek magazine. He blogs about the media.

Carroll: The Boston Globe’s delivery meltdown could have been avoided with careful planning and a carefully controlled rollout. But that didn’t happen—it was slapdash, chaotic, and mismanaged from the start. There will always be some disruption with major corporate changes, but the Globe’s handling of this switch turned it catastrophic.

At what point does print distribution become economically unfeasible, and is the Globe nearing that point?

As John Henry wrote in his mealy-mouthed apology to readers last week, “Subscription revenue is going to be the primary source of revenue in the future for newspapers.” The big question is, what’s the ceiling for that revenue source? Newspapers can’t indefinitely increase subscription and newsstand prices.

What’s the minimum print circulation needed to keep the print version of the Globe alive?

Only the Globe’s accountants—and John Henry’s wallet—know the answer to that.

If this drags on, what will be the consequences, for both subscriptions and advertising?

Here’s the issue: are the numbers that Globe executives are claiming (10 percent of newspapers undelivered, a minimal number of cancelled subscriptions, no ad cancellations or make-goods) accurate? Many people think not. One thing for sure: the longer this drags on, the more long-term financial damage for the Globe. And one more question: will the Globe even come near the $3 million in savings this move was supposed to produce? Or will it wind up costing the paper?

How many newspapers have switched to digital-only publication or cut print schedules to just several days a week?

According to Newspaper Death Watch, since 2007, 12 American metro dailies have closed and 15 have cut frequency or adopted hybrid online/print or online-only models.

If most papers maintain a print edition because print advertising is more lucrative, how have online-only papers survived?

By slashing their staffs. When the Seattle Post-Intelligencer shed its print edition, it also reportedly shed 80 percent of its newsroom. It now lists 12 staffers in its newsroom.

The Globe’s travails coincide with the Hollywood lionization of the paper’s investigation of pedophile priests in Spotlight. Without detracting from that investigative achievement, does the movie airbrush a grimmer economic reality for the Globe and newspapers generally?

In 2002, when the action in Spotlight occurred, the Globe was owned by the New York Times Co. and was in marginally better financial shape in terms of ad revenue and circulation. John Henry has said he doesn’t need to make money from the Globe, but he’s not willing to lose money. That’s a major financial straitjacket.

With plummeting newsroom jobs, how many COM graduates do you predict will go into newspapering in, say, the next decade or two? And are you hopeful or pessimistic about print journalism’s staying power and role in our society?

Intrepid COM journalism graduates will continue to get—and do—good jobs in the newspaper business. But they’ll also successfully pursue careers in innovative digital news ventures. Meanwhile, newspapers aren’t going away just yet, but they’re getting weaker all the time.

Whither Newspapers (Or Should That Be Withered)?

There are 3 comments on Whither Newspapers (Or Should That Be Withered)?

Whither Newspapers (Or Should That Be Withered)?
3
share this