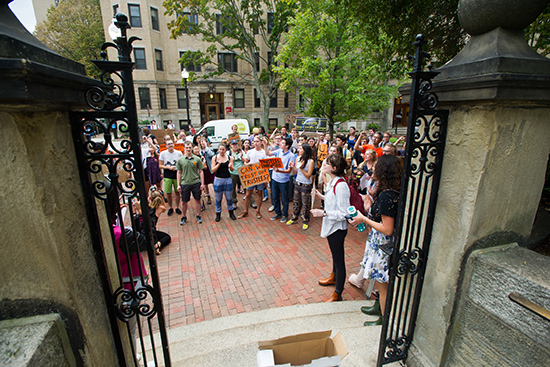 About 100 students rallied on Marsh Plaza Wednesday afternoon to urge that BU divest from fossil fuel companies. Chanting and singing, they marched afterward to the BU Castle, where they left a box of prodivestment ballots they’d signed for the University’s trustees, who were meeting on campus.

“The theme of our rally is all about people power,” Masha Vernik (CAS’19) told the ralliers. “It’s all about people showing up and standing out and demanding what they want.” Vernik is the secretary of Divest BU, a campus group that organized the event.

“Bay State Road is going to be underwater in 100 years, and that’s even if we do everything we can to stop climate change,” she said, echoing a prediction published by the National Academy of Sciences.

Nathan Phillips, a College of Arts & Sciences professor of earth and environment, reminded the gathering of President Robert A. Brown’s Matriculation speech. Brown, who called divestment a stance that’s “easy to take,” said it was more important for students to lower their energy consumption.

Phillips told the crowd that he believed advocating divestment actually is difficult: “We all depend on fossil fuels, but we see the influence of the money on misinformation…attacks on climate science itself and the scientists who are uncovering the information about climate.”

“For each of our futures, for our planet, and for our university, this is a decision that matters,” said Dimnwaobi. “It’s the poor and people of color who will suffer most from environmental disasters.”

The rally was timed to coincide with this week’s meeting of the Board of Trustees, who had received a faculty petition in 2014 seeking divestment, along with requests from Divest BU.

The trustees’ Advisory Committee on Socially Responsible Investing has since recommended that the board shed “direct investments” in companies that explore for new fossil fuel reserves. It also recommended divesting from companies that “extract coal and [oil-yielding] tar sands, the most carbon-intensive fuels,” until those companies curtail those operations.

The committee further proposed that the University’s endowment investment office include managers with expertise in renewable energy sources and technologies, “to speed up the global effort to reduce the human carbon footprint.” Finally, it recommended adoption of a Climate Action Plan, with goals and timetables for increasing green energy use, energy efficiency, climate research and education at BU, and preparation for climate change’s effects on the University’s physical plant.

In interviews, Divest BU members commended the committee’s recommendations. “That would be a huge win,” said Rachel Eckles (CAS’17), a Divest BU organizer.

Edward Loechler, a CAS professor of biology, said of the recommendations, “I couldn’t be prouder of the people who generated that document.”

The University already has announced plans to cut its carbon emissions 35 percent in an additional four million square feet of its buildings by 2020, and that it will cut energy use 10 percent over the five years ending next year.

Several American colleges and universities have stripped fossil fuel investments from their portfolios to fight climate change, which most climate scientists attribute primarily to fossil fuel emissions. One count says that of almost 600 institutions that have divested, 12 percent have been in higher education.

Eckles said Divest BU believes “the trustees need to address climate change differently from any other issue they have had to face before. The threats of climate change are imminent, directly affect our campus, and are largely due to the actions of our American society. We are all responsible for this situation we are in; however, we are all also responsible to demand our school do what it can to lead.”

There are 3 comments on Students Rally for Fossil Fuel Divestment