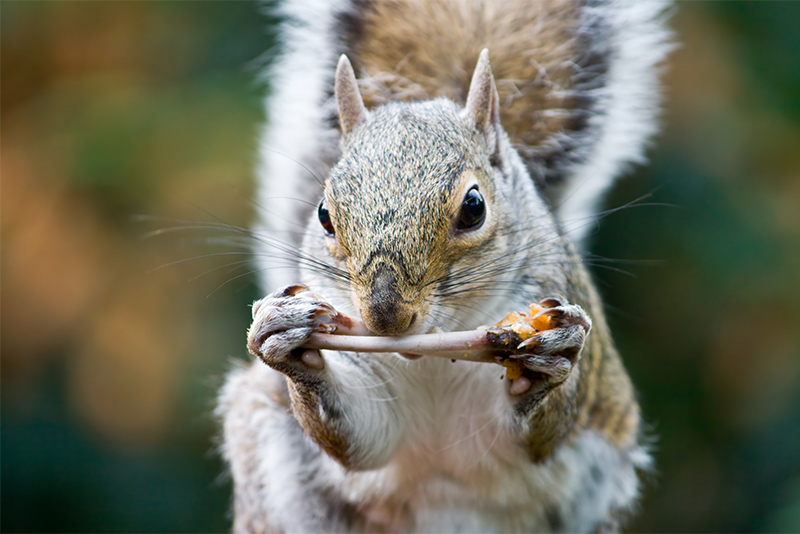 Eastern gray squirrels range from the Mississippi to the East Coast in the US and their territory extends into Canada. Squirrels are omnivorous and their diet includes seeds, nuts, fungi, and the occasional insect or bird egg. Photo by iStock.com/boboling

Strolling through Boston Public Garden on a sunny summer day, it’s easy to encounter wildlife, even in the heart of the city. Ducks and geese lazily drift on clear water or nap on the shore, woodpeckers and wrens populate the trees, and everywhere squirrels bounce by, fluffy tails rippling behind them. Perfect subjects for visitors’ photos, the squirrels couldn’t be cuter as they scratch their ears, chase each other around, and hop close to passersby, hoping for a tasty handout. Us Weekly reports that even Justin Bieber stopped to feed them as he relaxed in the Public Garden during his Purpose World Tour.

Despite their charms, however, squirrels can be destructive pests, and not just because they target the bird feeders in the backyard. New research led by James Pokines, forensic anthropologist and an assistant professor in the anatomy and neurobiology department at the Boston University School of Medicine, documents how squirrels left to their own devices will gnaw away not just on acorns, but on bone.

“Squirrels seem nice but are actually very voracious little creatures,” says Pokines. Like rats and others of their rodent brethren, squirrels will dig their teeth into bones lying exposed in the wilderness, whether animal or human. It is vital for forensic anthropologists to understand this toothy habit, since squirrel-gnawing can drastically affect human skeletal remains that are left to the elements. They might also scatter the bones away from the original site, disturbing the integrity of the skeleton. The damage rodents can cause and tooth marks they leave, sharp as knife strikes, can both confound and inform crime scene investigators.

How often does a forensic anthropologist see gnawing damage on bone? “Constantly,” says Pokines. He says that most remains found above ground—including accident or homicide victims as well as exposed cemetery remains—show some evidence of gnawing. Squirrels and other rodents can chew the ends off bones, sometimes to the point of destroying their distinctive shape completely, making them hard to identify. The gnawing marks can also obscure evidence of trauma to the bone, such as bullet or knife marks, or even be mistaken for weapon marks themselves.

Pokines, who has also studied gnawing in voles and other rodents, decided to investigate eastern gray squirrels because they have a large range and are easy to observe. Researching squirrels, he says, will also help identify the worst culprits when looking at a gnawed-on bone. His study, published in April 2016 in the Journal of Forensic Identification, had a simple design: he and his students attached dry white-tailed deer bones to trees around Boston, left them for eight weeks, and checked them every two weeks for signs of squirrel damage. The researchers wired the bones to branches several feet off the ground to discourage rodents other than squirrels from reaching them. “A few of us did have to climb trees to place the bones on more secure branches,” says Sierra Santana (MED’16), co-author and student of Pokines, who explained that she, Pokines, and the other researchers placed the bones at night to avoid awkward questions. “Our neighbors were also really good sports about the whole thing.”

The researchers documented and photographed any evidence of gnawing, and also placed motion-activated cameras in the trees to try and catch squirrels in the act. The work led to some up-close encounters. “I was entering our backyard when I saw a very large squirrel holding a vertebra in both hands and gnawing furiously on it,” recalls Santana. “We startled each other and I just backed out of the yard to let him do his thing.”

The gnawed bones gave the researchers a lot of information, such as where and how squirrels gnawed most. The squirrels showed a preference for gnawing on long or dense bones, like the femur and ulna, which are part of a deer’s legs, or the calcaneus, which is part of the heel. In general, the squirrels gnawed on the ends and margins of the bones, sometimes completely changing their shape. The researchers recorded the width of the tooth marks left by the squirrels, which could help differentiate squirrel gnawing from that of other rodents. The researchers also noted when bones went missing. Although some bones were unwired from the trees by curious humans, others likely slipped out and were carried off by squirrels, says Pokines.

This information could help forensic anthropologists better analyze remains that are found outdoors. “I’ve always thought [squirrels] were quite cute but I’ve now seen the damage they can do to bone and I am impressed,” wrote Santana in an email. She and Pokines hope their research will inspire more studies about rodent gnawing in other countries, where squirrels may not be the prime suspect, and bolster the science of forensic anthropology. “Sometimes the answer is very simple,” said Pokines. “A squirrel did it.”

There are 3 comments on Toothy Squirrels Could Confuse Crime Scenes