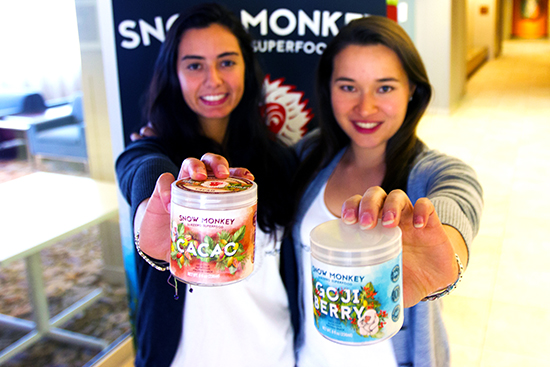 After a workout, roommates Rachel Geicke and Mariana Ferreira used to make their unique version of a healthy snack—putting fruit, hemp seeds, ice, and sunflower butter into their blender. They thought the concoction tasted like ice cream, but because it had no dairy and no added sugar, it was far more healthful than your typical pint of Ben & Jerry’s. They began making the blends for friends, who loved it and wanted to buy some to take home. Last June, the two women realized what they had: a potential business.

Geicke (SHA’15) and Ferreira (Questrom’16) have spent the past eight months learning how to launch Snow Monkey, which currently makes two flavors of “subzero superfood,” goji berry and cacao. Each 8-ounce container has 10 grams of protein and is vegan, gluten-free, nut-free, and paleo-friendly. After raising more than $36,000 on KickStarter in just over a month, the two are meeting with retailers who might help distribute their product (right now the only way to get it is to contribute to their Indiegogo campaign).

Along the way, they had to immerse themselves in the ins and outs of food production, food science, manufacturing, and the business world.

“We gave up other opportunities and have made this our full-time job,” says Geicke, who graduated last year (Ferreira walked this May). “We want to do the product justice, so the risk of not trying is greater than the risk of the idea itself. I know there’s a huge chance of failure, especially given the fact that we don’t have a background in food or nutrition, we are straight out of college, and every day we wake up to this huge learning curve.”

Geicke and Ferreira chose the name Snow Monkey because they thought it was easy to pronounce and easy to remember. “It’s a very primal product, and monkeys themselves are very primal versions of us humans,” Geicke says. “Snow monkeys are a type of monkey that live in cold climates, so we put two and two together.”

Last summer, Geicke and Ferreira applied to the Questrom School of Business Buzz Lab, which helps young entrepreneurs turn their ideas into viable business plans with advice and coaching from mentors. Although the program is geared towards tech start-ups, they say, they benefited from the advice and appreciated learning the sense of discipline necessary for such a project. With a stipend from the program as well as their own savings, they set out to start their company.

First they had to narrow down their list of recipes, from about 100 to the 2 that stuck, and they had to make sure their product would taste great weeks after it left the factory.

“Traditional ice cream formulas freeze solid at very low temperatures, whereas our formula freezes at higher temperatures—we estimate between negative 5 and negative 10 degrees—because we don’t add sugar and have no fatty substances, like milk,” Ferreira says. Since they don’t use emulsifiers or artificial stabilizers, they wanted to make sure that the ingredients could stand up, and not become a frozen block.

For this, Snow Monkey hired a food lab, and while the experts were helpful, they suggested adding things that Geicke and Ferreira wanted to avoid, like coconut milk (they were determined to stick with sunflower butter). Their goji berry flavor has no added sugar, so the natural sweetness comes from the fruit, which includes goji, mixed berries, apples, and bananas. In the cacao flavor, they add a drizzle of pure maple syrup to balance some of the cacao powder’s natural bitterness.

Snow Monkey is now being produced in small quantities during off hours in an ice cream factory in the women’s hometown of Santa Monica, Calif. The manufacturer’s employees make and package the food, but the two women oversee the operation and handle quality control. They’re also learning how to market their product through regular meetings with potential investors and distributors and tasting events, like the popular ones they held for students in February at Questrom and the School of Hospitality Administration.

“Too many times, health food tastes like cardboard,” Geicke says. “When we started making this, we felt like we were having a frozen treat that tasted like ice cream. We think that food that is good for you should taste good too.”

There are 7 comments on Don’t Call It Ice Cream