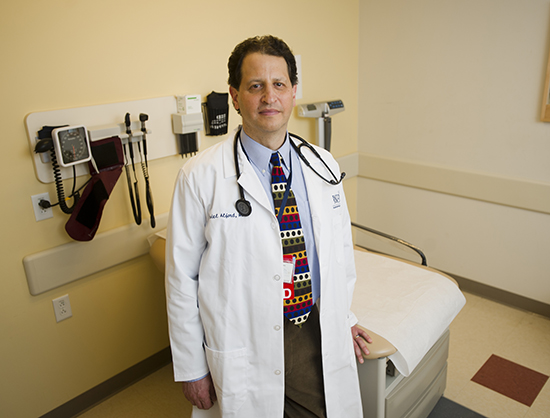 Daniel Alford (SPH’86, MED’92), a School of Medicine associate professor of medicine and the assistant dean for continuing medical education, is leading the effort to expand MED’s opioid and addiction curriculum. Photo by Cydney Scott

Massachusetts—like the rest of the nation—is in the grip of a public health crisis involving opioid overdoses. In 2014, more than 4.6 million scripts for opioid analgesics were written in the Bay State, and an estimated 1,256 people died from heroin and prescription opioid overdoses—the highest number on record. Nationwide, the Centers for Disease Control and Prevention says that the rate of overdose deaths has increased 200 percent since 2000, echoing a 140 percent increase in opioid prescriptions since the mid 1990s.

In an effort to address the opioid overdose crisis in Massachusetts, Governor Charlie Baker reached out this past fall to the deans of the commonwealth’s four medical schools (BU School of Medicine, Harvard Medical School, Tufts University School of Medicine, and University of Massachusetts Medical School) and asked for their help in designing a list of core competencies needing to be covered during medical school to help combat prescription drug misuse, addiction, and overdose fatalities.

Working with the Massachusetts Medical Society and Monica Bharel (MED’94), the commonwealth’s public health commissioner, the schools developed a list of 10 competencies that will be introduced into their curricula beginning this year.

“These educational standards represent an innovative and forward-thinking contribution to the state’s multifaceted strategy to curb the opioid epidemic,” Baker noted in his announcement of the results of the med schools’ collaboration.

“We previously provided a curriculum that emphasized preventing and treating addiction,” says Karen Antman, MED dean and provost of the Medical Campus. “Now we have integrated the 10 competencies over the four years of our curriculum. We are responding to provide a stronger foundation for tomorrow’s physicians and scientists.”

MED’s Safe Opioid Prescribing Curriculum is being overseen by Daniel Alford (SPH’86, MED’92), a MED associate professor of medicine and assistant dean for continuing medical education. The 10 core competencies, centered around 3 major areas, are designed to provide a broader, more comprehensive approach “to understanding the physician role in preventing, screening for, and managing unhealthy substance use and prescription drug misuse in our patients,” Alford says.

“The first area focuses on prevention of this problem in the first place,” he says. “It’s emphasizing the use of multimodal treatments for chronic pain that minimize the use of opioids, or when opioids are indicated, to prescribe them in a way that’s safe and that follows guideline-based care.” Students will be taught to identify those patients who may be at higher risk for running into problems with these medications, including people who have a personal or family history of a substance use disorder and those with a history of mental illness. “It doesn’t mean that you shouldn’t ever prescribe opioids for those individuals,” Alford says. “But it means that they’re at a higher risk for prescription opioid misuse and they need to be informed about that risk and we need to monitor them more closely.”

The second area focuses on patients who have been identified as at risk for developing problems with prescription opioids. The expanded curriculum will teach students how to treat patients who have a history of substance use disorder in a way that accounts for that risk, Alford says, “so that you can decrease the likelihood that the patient in recovery will relapse to active drug use.”

The third area will teach medical students how to manage substance abuse disorders as a chronic disease. This means learning to talk to patients about treatment options (including using motivational interviewing to help patients adopt healthier behaviors) and guiding them to resources and evidence-based treatments.

The new curriculum will be woven throughout the students’ education. The first year they will be taught how to become comfortable asking patients about substance use in a nonjudgmental way and using validated questions so that patients feel comfortable answering honestly.

“This is going to be integrated much like the existing curriculum around nutrition and evidence-based medicine,” says Alford. “There’s no one department that owns it by itself, but it crosses all the various departments, with the curricula imbedded in multiple places.”

As well as lectures and workshops on the neurobiology of addiction and how to screen patients for unhealthy substance use, students will participate in simulations, where they will work with actors playing patients who are suffering from various substance use disorders.

“We really want our students to carefully listen to their patients, to what they say and what they don’t say, and to treat their patients’ pain responsibly,” says Douglas Hughes, Ramsey Professor of Theory and Practice and MED associate dean for academic affairs. “It’s so important they get it right.”

In addition to the new safe prescribing curriculum, all fourth year MED students will complete the two-hour Safe and Competent Opioid Prescribing Education (Scope of Pain) program, a continuing medical education course for physicians and nurses designed by Alford and based on a curricular blueprint created by the US Food and Drug Administration. SCOPE of Pain debuted as an online course in 2013, with live training offered about six months later.

SCOPE of Pain is broken into three modules that follow a fictional female patient already taking opioids for her chronic pain when she visits her new doctor. In the first module, health care providers learn how to assess the patient’s pain and function and her risk for opioid misuse. In the second module, the patient returns a week later and the doctor must decide whether to continue, modify, or discontinue the opioids she’s taking, and if continued, how to monitor her to so she gets the most benefit and the least harm. In the final module, the patient shows up at an emergency room months after her first visit—she’s run out of her prescription and is asking for an early refill. That scenario helps physicians assess the kind of worrisome behavior she’s exhibiting: they need to consider all of the possible causes (differential diagnoses) and figure out how they might talk to her about the risk she’s facing. It also gives them a chance to consider how they might change the patient’s treatment plan. Alford says the program really aims to answer “how do you prescribe opioids in a way that maximizes benefit and minimizes harm.”

An evaluation of the SCOPE of Pain program was recently published in the journal Pain Medicine, showing how the program successfully shifted physician opioid prescribing practice toward safe guideline-coordinate care.

While he is optimistic that initiatives like the new Safe Opioid Prescribing Curriculum will help to reduce the opioid misuse epidemic, Alford, who was just named this year’s recipient of the American Society of Addiction Medicine’s Educator of the Year award, says faculty as well as students need to be trained. “You can train students to know what the right thing to do is, but if they don’t see it modeled when they start doing their clinical rotations, if they go out in the community and they see some doctor who’s doing something completely different, it doesn’t reinforce this new approach,” he says. “It all needs to happen at the same time, but once that occurs, I think we will make a difference.”

Hughes concurs that training tomorrow’s physicians by itself won’t make the opioid crisis go away. “I think this expanded curriculum will be successful in reducing opioid addiction and overdose, but there are bigger forces at play here,” he says. “There is a population of people who have a difficult time finding a job, holding a job. They don’t have opportunities, they don’t have financial resources. And that precipitates trouble. We will deal with the opioid crisis, but there are social inequities that have to be addressed if we’re to really tackle opioid addiction and overdose.”