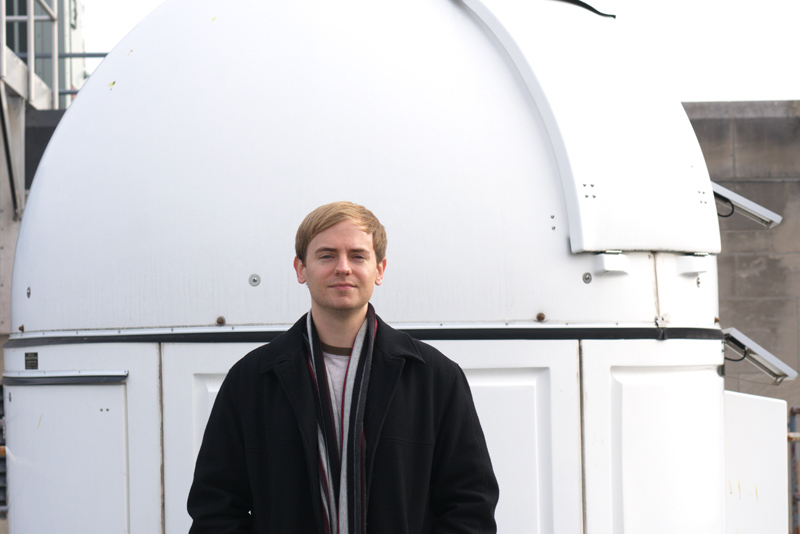 To most amateur stargazers, Saturn, with its majestic belt of rings, is the most beautiful planet in our solar system. But to astronomers like Paul Dalba, Saturn is much more than just looks. Because it is a cold giant planet, a large planet that is more distant from the sun than Earth is, Saturn can offer insights into the study of exoplanets, those planets that orbit stars beyond our solar system. Scientists’ big hope for exoplanetary research is that it will lead to the discovery of an Earth-like planet that can support life.

“Although we have not yet discovered an exoplanet with properties exactly matching Saturn’s,” says Dalba (GRS’18), a PhD astronomy student at Boston University’s Graduate School of Arts & Sciences, “a closer examination of Saturn holds important consequences for future studies of giant, cold exoplanets.”

Astronomers have many ways to study these distant worlds. One of them, known as transmission spectroscopy, attempts to analyze their atmospheres by examining starlight that has passed through them. The differences between that light and light that has not passed through an exoplanet’s atmosphere can tell researchers about the density and the chemical makeup of the planet’s atmosphere. By studying Saturn as if it were an exoplanet, Dalba and his team hope to learn if transmission spectroscopy could be applied in the study of cold atmosphere exoplanets.

Working with data collected by NASA’s Cassini Spacecraft, which has been orbiting Saturn and its many moons since 2004, Dalba and his team used ray tracing—a complex process of calculating the properties and direction of a ray of light as it travels from one point to another—to develop a model of Saturn’s atmosphere. Ray tracing works because in empty space, light travels in a straight line, but in an atmosphere, its path is curved by atmospheric refraction. To describe this deviance from a straight line, researchers must solve differential equations for each of the thousands of rays of light passing through Saturn’s atmosphere. Dalba set out to do that by running the algorithms on his MacBook Pro.

“It wasn’t practical,” he says. “It was clear that it was going to take about a month.”

Dalba’s advisor, Philip Muirhead, a BU College of Arts & Sciences assistant professor of astronomy, suggested that the researcher try running his algorithms on the Shared Computing Cluster (SCC) at the Massachusetts Green High Performance Computing Center in Holyoke, Mass., a joint venture among BU, Harvard, MIT, Northeastern University, and the University of Massachusetts. The SCC is operated remotely by the Boston University Research Computing Services group. The cluster, according to Wayne Gilmore, director of research computing services at BU’s Information Services & Technology, currently supports nearly 500 projects headed by 300 investigators from 66 departments. It is available to all BU researchers and is now used by about 2,000 of them, including graduate students.

Dalba filled out what he says is a fairly simple application for use of the supercomputer, and he has since logged about 20,000 computer hours on the cluster. Instead of tracing one ray at a time, he found that he could use hundreds of computers to get his results hundreds of times faster.

“Things that would have taken a month can now be done overnight,” he says.

What did Dalba learn about Saturn’s atmosphere? It’s mainly methane, followed by acetylene, ethane, and other hydrocarbons. More important, he was able to answer the question of whether transmission spectroscopy could be applied in the study of cold atmosphere exoplanets.

The answer is yes.