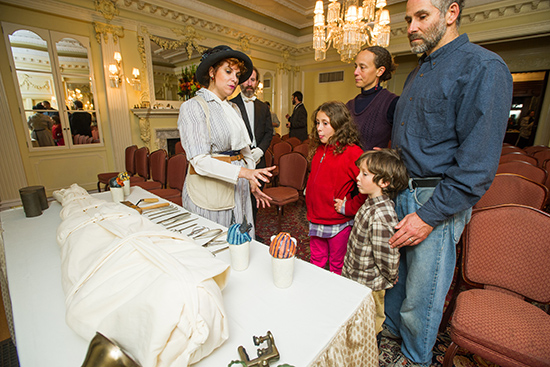 Egyptologist Ava Forte Vitali (left) with the Riman family from Cambridge, Mass. The guest of honor (on the table) was later theatrically unwrapped for archaeology students and their guests. Photos by Cydney Scott

In the late 1800s, the hottest ticket in town would get you into an event where an Egyptologist and a doctor crouched over a 3,000-year-old mummy and slowly unwrapped its bandages “for scientific purposes.” In the spirit of Halloween, and with a more than seasonal interest in archaeology, about 70 students and guests gathered Thursday night at the Castle to do the same thing at a sold-out event called Unrolling Egyptomania.

The mummy wasn’t real (today mummy unwrapping is considered unethical and destructive for both moral and scientific reasons), and everyone had a part to play. Women wore corsets and fascinators (head pieces), and men sported tuxedos and gloves, while the Castle’s chandeliers and Oriental rugs completed the 19th-century tableau.

The student-run event was produced in collaboration with the Greater Boston Vintage Society, with help from BU archaeology department staff. Earlier in the day, the students had invited local elementary school children to the Castle to see some of the artifacts that would be on display that evening, such as the mummy, Egyptian art, and other items borrowed from BU’s Gabel Museum of Archaeology.

Event director Ilaria Patania (GRS’17), a PhD candidate in archaeology, said unveiling parties were very fashionable occasions, hosted by those who could afford to buy a mummy as “entertainment for their house party,” and also by professors or hospitals, who would examine the relic in the name of science. The macabre unwrappings often did serious damage to the mummy’s body, and newspaper articles reported women fainting and men having to leave the room. By the 19th century, it became illegal to export mummies from Egypt, and Patania said dealers started to disassemble the mummies to smuggle them out of the country, leaving a lot of western collections with body pieces like heads, hands, or feet.

At 8 p.m., the group gathered in the Castle’s elegant music room, where a four-foot-long mummy wrapped in bandages awaited them beside an assemblage of tools, including scissors, tweezers, pliers, and a hammer. Playing the part of the Egyptologist was real-life archaeologist and art historian Ava Forte Vitali, Egyptologist-in-Residence at the Morbid Anatomy Museum in Brooklyn, N.Y.

Vitali related the backstory of the mummy, a prince called Khaemwaset (KAW-em-was-it) of the 19th Dynasty, known to us from the mythological stories of Greco-Roman Egypt as the magician Naneferkaptah. The mummy had been lost, she said, then found, then lost again, and after the unveiling, would be donated to Boston’s Museum of Fine Arts for further study.

“People started doing this for spectacle, to gawk at,” Vitali told the crowd. “But in this modern era of archaeology, we now believe archaeology should be done scientifically. We should understand the principles behind it.” As she talked, a doctor, played by Jade Luiz (GRS’17), snipped away at the mummy’s outer shroud. (To create the mummy, the team had gathered a fake skeleton, bandages cut from cloth, and gel stain to give it an aged appearance.)

Luiz remarked on a strange fragrance, and Vitali explained that Egyptians used incense, resins, and natron, a type of salt, in the mummification process. “The teeth are well kept,” ersatz doctor Luiz said, as she examined the mummy’s head. “They’re a little worn in the back, which tells me the person was around 50 or 60. This means he was probably eating a diet of more refined grains.”

Vitali explained that in an actual mummification, Egyptians would remove the lungs, liver, intestines, and stomach, and preserve them in jars. The brain was discarded, and the heart was left in the body. If the mummy was male, he was often buried with an erection, she said, “because of the belief that you would be able to regenerate yourself if you went completely prepared to get the task done.”

She pointed to several amulets, some on the mummy’s eyes and others spread around the body. “Some of them were placed specifically, whereas others were the gods he worshipped,” she said. “Also across his body are a number of scarabs, dung beetles that were a symbol of rebirth, because they would roll around in their own feces and lay their eggs.”

As a modern archaeology student, Patania has learned to have great respect for ancient Egyptian ritual, something that was lacking at most 19th-century unveiling parties. “Anything not British was considered culturally unevolved,” she said. “Since Victorians were fascinated with death and the Orient, people didn’t see Egyptology as a real science; rather, it was something that was entertaining. That’s where mummy unwrappings come from. The Brits would never exhume their own grandmother, but they would say, ‘Well, my grandmother was British, and we’re civilized people.’”