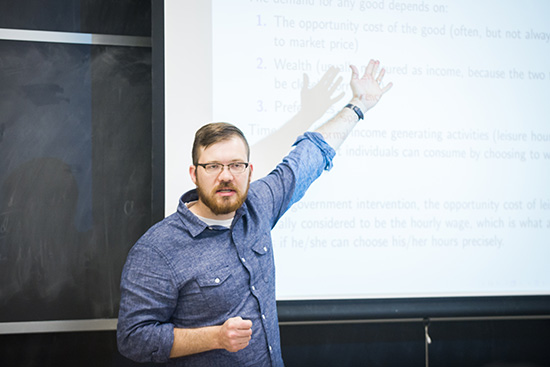 Lee Tucker’s class on the causes of poverty and discrimination tries to focus on evidence rather than students’ predispositions. Photo by Jackie Ricciardi

Who would turn down a guaranteed monthly check of $2,560 from the government? The Swiss, for one. Earlier this month, they rejected a so-called “universal basic income” (UBI) for all citizens, amid predictions that it would be paid for with higher taxes or severe spending cuts. Meanwhile, Finland and some Dutch municipalities plan to test-drive their own versions of the plan.

Those nations’ leaders could profitably spend the summer with instructor Lee Tucker (GRS’17) and his students. The UBI is among the many antipoverty strategies studied in Tucker’s class Economics of Poverty and Discrimination in the United States. One session considers the UBI and less ambitious offshoots like the earned income tax credit (an existing federal wage subsidy for the working poor). As far as the UBI goes, Tucker enunciates the obvious question: “Would this actually work?”

Seeking an answer, the PhD candidate in economics leads students through a discussion—replete with chalkboard graphs and talk about the “substitution effect” and labor supply theory—to make a technical point that the Swiss grasped intuitively: if you’re going to write everyone a check, the money has to come from somewhere. You could tax high earners, Tucker says, which would affect that income bracket; alternatively, you might tax a commodity like cigarettes, which would deter smoking. (“That one doesn’t sound so bad,” he opines.) Another consideration is whether government grants to people might be a disincentive to work.

Whichever revenue route you take, all roads lead to the same point, Tucker stresses: every antipoverty program involves trade-offs. That’s relevant today, as the Obama administration has proposed expanding the earned income tax credit to childless adults, who are largely denied its benefits currently, Tucker tells the class. “Depending on which day you ask,” he adds, “the Republicans support it or not.”

In a presidential election year that has seen young people cheer Senator Bernie Sanders’ call to reverse inequality, Tucker’s class touches a live wire. Yet the partisan-minded might be frustrated by its technocratic aversion to pat answers about the effectiveness of antipoverty programs. Solid evidence for one approach or another can be hard to come by, Tucker says in an interview, and his course syllabus warns, “You may leave this course feeling that you have more questions and fewer answers about how to address poverty and discrimination than when you began.”

“One of the key and most important conclusions of this class is it is much more difficult to answer questions like this conclusively than we would like it to be,” says Tucker, a former staff economist on the White House Council of Economic Advisers. (Among other things, he helped prepare an analysis of raising the minimum wage for the president. “I think 2013 was the first time that he had stated specific numbers in the State of the Union,” Tucker notes. “Some of those numbers were created by me. It was great.”)

Topics in the course, which draws mostly economics majors, include racial and gender discrimination in hiring and pay levels, higher poverty rates of children as compared to senior citizens, and the role of the usual suspects in poverty and low wages: lack of education, technology advancements, trade, the decline of unionization, and immigrants. Evidence suggests that all play a part, Tucker says, although on immigration, “that literature is contentious and not terribly suggestive of large effects, in my opinion.”

For economics major Unaswi Mudanga (CAS’18), the unanswered or incompletely answered questions aren’t troubling. He says that discerning proven economic facts from one’s values and opinions could help him when he returns to his native Botswana to help that developing nation.

“If I can maybe learn about poverty and have some opinions and different ways to get to the root of it,” he says, “I can somehow bring this information back to my country when I go back, because I was hoping to get a job in policy making in government.”

Tucker’s class has taught him “how economics is very normative, and a lot of the things we say are not really what is, but what we hope to be.…There are a lot of ethics and moral thoughts that we put into” economics. “There are always two sides to the coin whenever research comes.”

And by talking about trade-offs, the course teaches this aspiring policy maker a valuable lesson: “At the end of the day, not everyone is happy after a policy is put in. There are always going to be losers.”

A Class on Poverty and Discrimination, in the Year of Sanders

There are 3 comments on A Class on Poverty and Discrimination, in the Year of Sanders

A Class on Poverty and Discrimination, in the Year of Sanders
One Class, One Day
3
share this