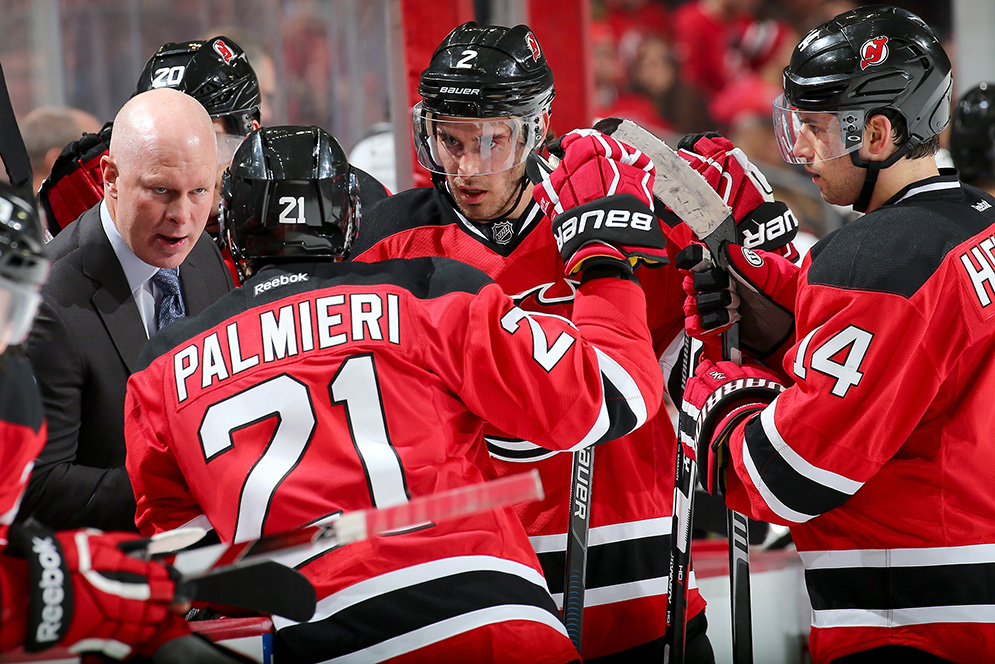 New Jersey Devils head coach John Hynes (SED’97) puts on a serious face around the ice, but his players say he brings out their best by treating them with respect. Photo by Elsa/Getty Images

Professional hockey isn’t known for its touchy-feely side, but when John Hynes took over as the head coach of the National Hockey League’s New Jersey Devils last summer, his first move was to load his team onto a bus and drive to Vermont for a bonding retreat. At a ropes course.

“It was really a lot of trust. You’re up pretty high, and it’s your teammate who is running the ropes,” says right winger Lee Stempniak in the Devils locker room after a February practice, shortly before being traded to the Boston Bruins. “That really carries over to the season. When it’s a tough time, you can look someone in the eye and know they’ve had your back before and they’ll have it again.”

Inside the rink, Hynes (SED’97) puts on a serious face. He’s a leader who knows he doesn’t have to shout, because his players listen to him. They like him. His nickname is writ large in tape on the wall of the drab interview room where he holds court after practices and games: “HYNESY!”

“He’s more progressive than other coaches I’ve had,” Stempniak says. “It’s nice to know you’re not being neglected individually within the structure of the team, and I think guys really appreciate that.”

Hynes got the retreat idea from an assistant coach, he says, but it lines up with what he learned at BU two decades ago, where team-building exercises were part of his physical education courses at the School of Education.

“He doesn’t lecture you,” Devils goaltender Cory Schneider says. “He doesn’t belittle or demean you in any way. I think he tries to coach you up and inspire and bring the best out of you, which is not a trait that everybody has.”

“I think it may be more indicative of my background, understanding the importance not just of teaching, but of how people learn,” says Hynes, one of three former Terriers coaching in the big leagues. (Former BU basketball captain Brett Brown (MET’83) took over as head coach of the struggling Philadelphia 76ers in 2013, and former hockey star Mike Sullivan (Questrom’90) became head coach of the NHL’s Pittsburgh Penguins in December 2015.) “It starts early in the season,” Hynes says, “getting one-on-one with players and trying to understand what their motivations are as players and people, and then it’s the environment you try to create off the ice.”

According to goaltender Cory Schneider, Hynes has a unique technique for getting his team to buy in. “He doesn’t lecture you,” Schneider says. “He doesn’t belittle or demean you in any way. I think he tries to coach you up and inspire and bring the best out of you, which is not a trait that everybody has.”

The technique seems to be working. Last year, the Devils went 32-36-14, finished seventh in the Eastern Conference Metropolitan Division, missing the playoffs for the third straight year. This year, Hynes brought the team to a winning 36-32-8 record, but they’ll likely miss the playoffs again, with an injury to the red-hot Schneider among late-season challenges.

“This is part of a bigger picture, a bigger plan, and our season has probably gone better than some predicted,” says general manager Ray Shero, who was also new to the team last year. “I don’t think there’s a player that is on our roster who has disappointed us. Hynes has gotten everything he can out of players, which is a really good coaching job, obviously.”

Playing for, and learning from, an icon

“He was getting better and better, and getting more and more ice time,” says 40-year head coach Parker (Questrom’68, Hon.’97), who retired in 2013. “He’s not a big guy as you can see, but he was a real hard-nosed guy, a real competitor, and really well-liked. He would play any role. ‘You want me to kill a penalty?’ ‘You want me to play on the third line? The first line?’ He was a very good example for everybody else.”

By the start of senior year, Hynes had moved up to the second line, but that fall he was injured during the first game of the season. “I got hit, but it wasn’t like a major thing. I got up and went back in the game,” he says. “But on the bus ride home my neck got really stiff.”

Doctors found a ruptured disc in his neck and said he shouldn’t take any more hits. He could try to keep playing, but he knew what the consequences could be—he was watching from the bench when Travis Roy (COM’00) was paralyzed after crashing into the boards in his first BU hockey game the previous season. An option for Hynes was a neck fusion that might solve the problem in the long term. But he decided to end his on-ice career, figuring the risks weren’t worth the rewards.

“I wanted to play, but I wasn’t good enough to get to the NHL,” Hynes says. “It was tough. I knew I wanted to coach and teach when I was done playing. But it was very disappointing, because I still had basically half my senior year left.” 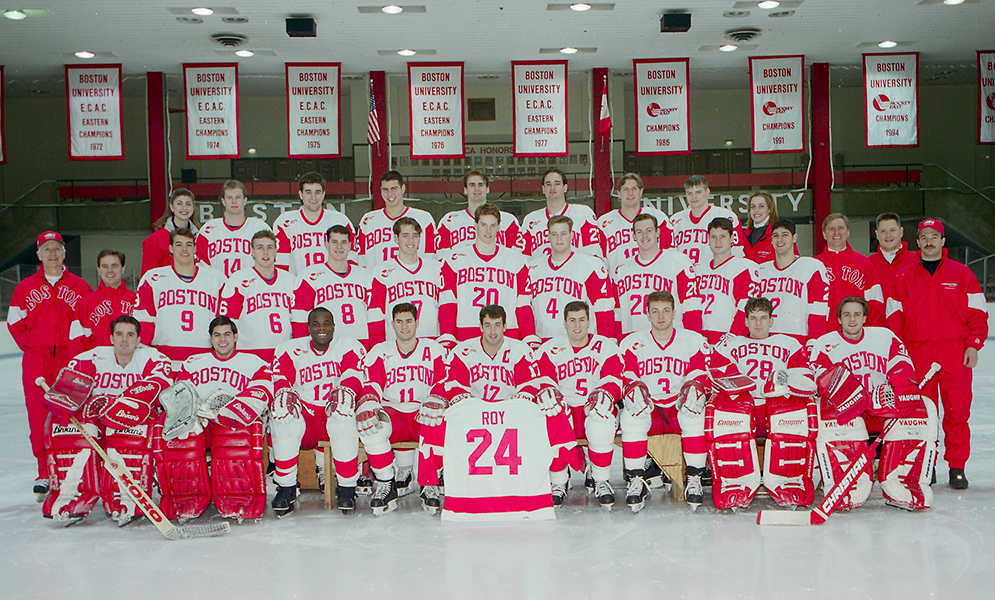 The 1995–96 BU ice hockey team. The next fall #14 Hynes (back row, second from left) was injured, ending his on-ice career. Photo by Kalman Zabarsky

After one of the team captains talked to Parker about keeping Hynes around as a volunteer coach, he worked with the Terriers for the rest of the season. “That really helped me get through it,” Hynes says. Parker’s decision also gave him a leg up in his next career. The next fall, physical education degree in hand, he was a graduate assistant for Parker for the season.

He followed that with coaching roles at the University of Wisconsin, UMass Lowell, and USA Hockey’s National Development Program. In his six seasons as head coach of the program, he led the US Under-18 National Team to three medals at the World Championships, including the gold in 2006. He then spent six seasons with the American Hockey League Wilkes-Barre/Scranton Penguins, an affiliate of the Pittsburgh Penguins, five as head coach. There he amassed a 231-126-10-17 record, reaching the AHL finals twice and becoming the second fastest coach in AHL history to reach 100 wins.

“Finally he got his chance with New Jersey,” says Parker. “I think he’s in the running for Coach of Year.”

Hynes says there’s quite a bit of Parker in the way he coaches: “It’s how he motivated everyone and how he treated everyone on the team. There’s a lot of that I got from him. And the standards the program was run with, the accountability, the attention to detail.”

Shero was the Penguins GM when he hired Hynes as assistant coach in the Wilkes-Barre/Scranton job in 2009 and a year later gave him the head coach job. Shero took over as Devils GM last May with a mandate to rebuild, and a month later signed Hynes as head coach on a multiyear contract. He says he had no clue that it made the 40-year-old Hynes the youngest coach in the league.

“I saw the difference he made on and off the ice,” in the Penguins organization, says Shero. “He was certainly cutting-edge.” Hynes isn’t the kind of old-school coach who sits a player and gives him the silent treatment. Instead it’s about communication and accountability: it’s “Here’s why you’re out, here’s where you need to be better, here’s the expectation.”

At practice in Newark’s Prudential Center, where the Devils play, Hynes’ assistants call out each new drill. The head coach watches intently, skating alongside one player or another for a moment to give specific instructions about skills such as stick detail (maintaining control of the puck and keeping it a safe distance from opposing players).

“They’re very bright hockey guys,” Hynes says. “To earn their respect and keep it, they have to know you’re going to help them become better players and help the team win.”

“You’d be amazed how many coaches at our level don’t coach anymore,” Schneider says. “They manage, they steer the ship, they make sure everything’s humming along. But it seems every day the coach is trying to teach us something or get us to work on something. Every practice is for a purpose.”

Aside from the media spotlight, Hynes says, the biggest difference in moving to the pro level is the players, who need more than talent to build a career in the league. “They’re very bright hockey guys,” he says. “They want to get coached, and they want information that’s going to make them better. To earn their respect and keep it, they have to know you’re going to help them become better players and help the team win.”

The hope, of course, is to build a team that’s in competition for the Stanley Cup by a season’s end. Shero says that while Hynes has taken the important first steps, the Devils need more depth of talent on the ice. Thus the decision at the trading deadline to send popular scorer Stempniak to the playoff-bound Bruins for a couple of high-round draft choices.

“We had to take a bit of a longer view of what was going to be best for the immediate future versus best for the next few years,” Hynes says. “The move of Lee Stempniak gave him a chance to compete for the Stanley Cup, but it also opened up some opportunities in our lineup for guys coming up from the American Hockey League or for guys on our team to step up into Lee’s role. And in return we were able to get a second-round pick and a fourth-round pick, both valuable when you’re trying to rebuild an organization.”

“To me, what year one is about is standards, on and off the ice, how we play, how we practice,” Shero says. “Hopefully it will pay off for us down the line.”

“We’re playing faster hockey, more attacking, carrying the puck into the zone instead of dump-and-chase,” Susie said. “I think Hynes is a really good coach, especially with the young guys, explaining things to them. It’s refreshing.”

“They’ve latched onto this new coach immediately,” said Craig. “He’s got something special that he was able to sell to these guys, and they’re buying it. Everything’s going in the right direction.”

Taking the Devils to the Next Level

Taking the Devils to the Next Level
0
share this