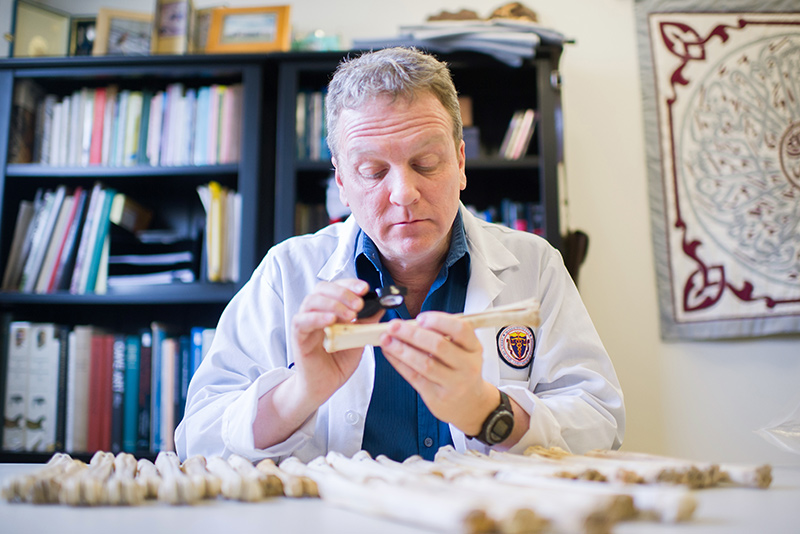 Forensic anthropologist James Pokines studies how bones “weather,” or break down when left outside. His recent work found that freeze-thaw cycles are an important component of weathering.

About once a month, James Pokines has a case at the state Office of the Chief Medical Examiner that requires extra attention. Pokines, assistant professor of anatomy and neurobiology, is also the forensic anthropologist for the Commonwealth of Massachusetts. “Any bones that come to the morgue,” he says, “go to me.”

People find bones all the time: washed up on the beach, caught in a scallop rake, dispersed out in the woods, dug up during home renovations, and even—seriously—hidden away in grandma’s closet. Most bones sent to the morgue are humdrum, easily identified as deer, chicken, or even melted plastic. But it’s those once-a-month cases, when somebody sends in, say, a femur that is actually bone, and actually human—that pique Pokines’ interest. His job is to determine, as best he can, the sex of the person, their ancestry, stature, and age at death. He also studies the field of science known as taphonomy: the changes that living organisms undergo from the time of death until their remains are preserved (or not) as a fossil. But crime investigators want more: they want to know how long it has been since a person died. This information is often beyond the grasp of forensic science, though Pokines and his colleagues are working to change that, most recently with research published in the March 17, 2016, Journal of Archaeological Science: Reports.

“The condition of the bone depends entirely on where you put it—every microclimate is a little different,” says Donald Siwek, a research assistant professor in the Department of Anatomy & Neurobiology at the School of Medicine. “So you can’t just look at a bone and say it’s two years old. If you’re good, you can say it’s recent, but if you want to get closer than that, it’s hard to do. That’s why it’s a big area of research.”

A bone left lying outside will eventually disintegrate in a process called “weathering,” which is one component of taphonomy. Forensic scientists use a six-stage weathering scale, with “0” meaning not weathered at all, and “5” meaning that the bone is crumbling into dust and splinters. But how quickly a bone goes from 0 to 5 depends on many factors: UV light from the sun, minerals from groundwater, heat, humidity, wetting and drying, and freezing and thawing. Research on each of these factors is scarce, but Pokines recently shed light on one: the freeze-thaw cycle.

Scientists can routinely estimate the age of ancient bones—like those from mummies—though carbon dating. They can also determine the age of younger bones—like those from a recent murder victim—by studying the state of decomposition of the body, and the types of insects swarming the scene. But it’s those in-between bones, the ones that have been lying in the woods for a year, or a decade, that puzzle forensic anthropologists like Pokines.

“If a body has been lying outdoors for a year, two years, three years, how do I know how long it’s been out there? That’s the hard thing, that middle gap,” says Pokines. “That’s one of the things that we’re researching: Can we tell how long the body has been there, when everything else is washed away, when the clothing is decomposed, when any ID they had is either gone or was never there.”

To examine how repeated freezing and thawing affects bones, Pokines and his researchers—mostly students—started with the dried leg bones of 93 deer. (Why deer? They’re free, plentiful, and roughly human size, says Pokines.) They covered large plastic trays with moistened pads, spread the bones on top, and sealed the trays in giant plastic bags. Then they froze the bones. And thawed them. And froze them. And thawed them. They repeated the freeze-thaw cycle 75 times, stopping every 25 cycles to examine how the bones were changing.

While Pokines expected the repeated freezing and thawing to crack the bones—after all, that’s what happens to rocks—he wasn’t sure exactly how or where the bones would break. What his research group found: on the bone’s surface, long cracks all along the shaft. Then, he and his students cut the bone into thin, circular slices and examined them under a microscope. They found tiny micro-cracks within the structure of the bone, as well: “It definitely seems like a component of what’s going on with the bones starting to fall apart,” he says. The next step is to quantify these results, so that that they may eventually help investigators determine the age of a bone, and how long it’s been exposed to the elements.

“On TV they say, ‘this person’s been dead exactly 72 hours—that’s not how it works,’” says Siwek. “We want to be able to give law enforcement an ‘accurate estimate’ of the time of death. That’s the job of the forensic anthropologist. But so many environmental factors come into play; that’s why it’s hard but also why it’s important.”

Ultimately, says Pokines, the freeze-thaw cycle is just one piece of the forensic puzzle. He suspects that repeated wetting and drying of bones may play an even larger role in weather than freezing and thawing alone. “We hope other scientists will perform similar research into what makes bones weather,” says Pokines. “We’re trying to separate all these different factors, and the freezing and thawing is just one part of what’s going on.”