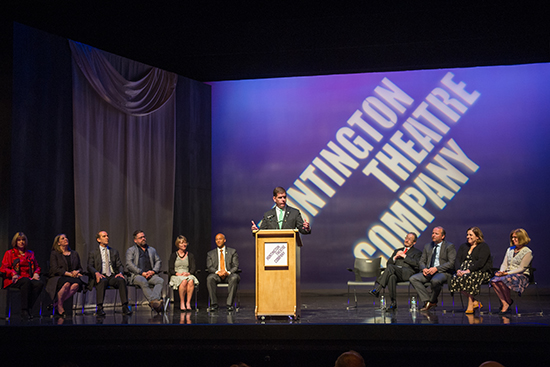 Boston Mayor Martin J. Walsh at the press conference announcing the deal between the Huntington Theatre Company and developers that will keep the company in its longtime home at the BU Theatre. Photo by Cydney Scott

The Huntington Theatre Company has reached an agreement with developers that will allow it to remain at its current location in the Boston University Theatre on Huntington Avenue for the foreseeable future, even as a major new development is built next door.

The theater complex, owned by BU for 62 years and home to the theater company since 1982, was sold in March for $25 million to an investment group working with lead developer John Matteson. The sale, which closed on May 2, included the 890-seat theater at 264 Huntington Avenue and adjacent buildings to the east, at 252 and 258 Huntington Avenue.

The theater company will need to raise an estimated $60 million to $70 million dollars to fund a major renovation of the theater under the deal announced by Boston Mayor Martin J. Walsh on Thursday at the BU Theatre.

Walsh was joined by Huntington managing director Michael Maso and Matteson at the press conference, which was attended by many local arts leaders, who were handed “Huntington on Huntington” lapel pins after the announcement.

“The bottom line is, the Huntington is here to stay, where it belongs, on Huntington Avenue,” Walsh said. “This is an exciting day for the city of Boston.”

Few details about the projected plans for the property, owned by the investment group QMG Huntington, LLC, were made available. “We are just starting the process, but we are not looking to touch the theater,” Matteson told the audience of approximately 200. As part of the agreement outlined Thursday, the Huntington will retain control of the theater and the service wing to the west that now includes the company’s dressing rooms, costume shop, and the Lane-Comley Studio 210 performance space.

The main footprint for the new construction would be the space currently occupied by the buildings to the east of the theater. That means the Huntington will have to relocate its set and prop shops, a rehearsal hall, and other facilities. But the theater’s lobbies and public spaces will be connected to the new development, Maso said.

“We are committed to restoring the theater, modernizing the infrastructure, and expanding the public spaces—and yes, that does mean lots more women’s restrooms,” he said to loud applause.

Maso said that it was inevitable that the theater would need to close temporarily at some point during construction. The theater company also operates a second stage in the Calderwood Pavilion at the Boston Center for the Arts in the city’s South End.

The money from the sale of the buildings will help BU pay for the construction of a new 250-seat studio theater and production spaces on the Charles River Campus, planned to open in fall 2017 as part of an improvement of College of Fine Arts facilities valued at more than $50 million. The Huntington Avenue buildings have given the University’s production and design students an opportunity to work with theater company staff, but have also left them separated from the rest of BU along the Commonwealth Avenue area.

The University is completing the design process and the necessary public approvals for the 820-846 Commonwealth Avenue theater facilities and hopes to begin construction this summer, according to Gary Nicksa, senior vice president for operations.

BU was instrumental in creating the Huntington Theatre Company in 1982, but when it became a separate entity in 1986, the University continued to provide rent-free use of the facilities.

“We are pleased that the Huntington Theatre Company and John Matteson have reached a mutually beneficial arrangement that enables the Huntington to continue producing high-quality theater in Boston,” says Jean Morrison, University provost and chief academic officer. “The Huntington holds a rich and important place in Boston culture. BU is proud of its long-standing past partnership with the theater and is glad to have been part of its history.”

BU is leasing back the facility through June 30, 2017, and has promised the Huntington rent-free usage until then, a full year beyond the agreement that existed before the March sale. That guarantee, which includes maintenance and utilities, represents a cost to the University of about $1.4 million. The School of Theatre will also continue to use the facilities through the 2017 spring semester.

“When the developer was chosen, we had a meeting right away—probably two days after—and we had a willing partner,” Walsh said at the press conference. “There was never a moment where I felt that once this property was sold, this theater was in jeopardy.”

Completed in 1925, the theater is on a stretch of Huntington Avenue, known as the Avenue of the Arts, that is also home to Symphony Hall, the New England Conservatory of Music, and the Museum of Fine Arts.

Huntington Theatre Company to Remain at Present Location
2
share this