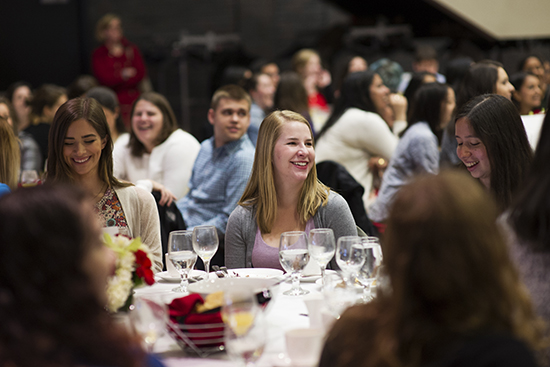 The Senior Breakfast ended with the BU Band and singer Denise Ward (CFA’16) leading the Class of 2016 in singing “Clarissima.” Photos by Jackie Ricciardi

University President Robert A. Brown announced the choice of the network executive during Monday’s Class of 2016 Senior Breakfast at the George Sherman Union Metcalf Ballroom, where 2,500 students munched on a breakfast of roasted tomato and fontina egg strata, duck-fat roasted potatoes, chicken and apple sausage, seasonal fruits and berries, scones, and muffins.

Event emcee Kenneth Elmore (SED’87), associate provost and dean of students, set the mood for the morning by playing songs that were popular when the Class of 2016 entered as freshmen—Carly Rae Jepsen’s “Call Me Maybe” and Gotye’s “Somebody That I Used to Know”—accompanying a slideshow of photos of the seniors when they first arrived on campus as freshmen.

Brown told the graduating seniors, “You have been on a journey here at BU, and we hope that in your four years here, you have fulfilled your expectations. I have one request for you as you leave here—have a wonderful senior week, but stay safe.”

Tassler (CFA’79), who is also a BU trustee, will receive a Doctor of Humane letters. The president also named this year’s other honorary degree recipients: Peace Corps director Carrie Hessler-Radelet (CAS’79), Doctor of Laws; US Secretary of Energy Ernest Moniz, Doctor of Laws; and motivational speaker and former BU hockey player Travis Roy (COM’00), Doctor of Humane Letters. Hessler-Radelet will give the Baccalaureate speech on Commencement morning at Marsh Chapel. Debra Marcus (CAS’16) has been selected as this year’s student speaker. Roy’s name got the largest round of applause from the audience.

Brown also announced the winners of the University’s highest teaching honors. This year the top teaching honor, the Metcalf Cup and Prize, will go to Christopher Gill, a School of Public Health associate professor of global health. Manher Jariwala, a College of Arts & Sciences lecturer in physics, and Erin Murphy, a CAS associate professor of English and women’s, gender, and sexuality studies, will be given Metcalf Awards for Excellence in Teaching. The three faculty members will be honored at the Commencement ceremony.

Tassler is advisor and former chairman of CBS Entertainment. Programming broadcast during her tenure includes megahits like The Big Bang Theory, The Good Wife, Criminal Minds, How I Met Your Mother, Elementary, Mom, Undercover Boss, and Madam Secretary. Under her leadership, CBS has been the country’s number one network for 12 of the last 13 years and has thrived even as the television industry has had to adjust to challenges related to cable and online content.

She grew up in New York state and earned a bachelor’s degree in theater at the College of Fine Arts. She started her career assisting at the Roundabout Theatre Company in New York City, worked as a talent agent in Los Angeles, and eventually became head of drama development for Warner Bros. Television, where she helped develop several successful series, among them ER.

In 1997, Tassler joined CBS as vice president, drama, at CBS Productions, and became chairman in 2014. As chairman, she led the network’s entertainment programming and program development, strengthened its daytime lineup by introducing Emmy-nominated The Talk, and guided its late-night programming transition with The Late Show with Stephen Colbert and The Late Late Show with James Corden.

Tassler serves on the board of directors of Jewish Family Services and the Paley Center for Media and is a member of the Geena Davis Institute on Gender in Media ambassador council and the Academy of Television Arts & Sciences executive committee. She is an inductee of the Broadcasting & Cable Hall of Fame and a recipient of the Lucy Award from Women in Film. She recently published her first book, What I Told My Daughter: Lessons from Leaders on Raising the Next Generation of Empowered Women.

Hessler-Radelet comes from a four-generation Peace Corps family. Inspired by her grandmother—herself a former Peace Corps volunteer—Hessler-Radelet began her career in international development as a Peace Corps volunteer in Western Samoa from 1981 to 1983, teaching secondary school with her husband. While there, she helped develop a public awareness campaign on disaster preparedness. She later was vice president and director of the Washington, D.C., office of John Snow, Inc., a global public health organization overseeing programs in more than 85 countries.

After rejoining the Peace Corps as the agency’s acting director and deputy director from 2010 to 2014, in June 2014 Hessler-Radelet was sworn in as director. Since then, she has led historic reforms to modernize and strengthen the agency, spearheading sweeping efforts to revitalize the volunteer recruitment, application, and selection process, resulting in record-breaking application numbers in 2015. She has championed the health and safety of volunteers, leading initiatives to dramatically improve their support and reduce their risks.

Hessler-Radelet has also been instrumental in forging innovative strategic partnerships, such as Let Girls Learn, a collaboration with First Lady Michelle Obama, to expand access to education for adolescent girls around the world, and the Global Health Service Partnership, which sends physicians and nurses to teach in developing countries. She is actively involved in the US President’s Emergency Plan for AIDS Relief and was a primary author of its first strategic plan.

She earned a bachelor’s degree in political science from the College of Arts & Sciences and a master’s degree in health policy and management from the Harvard School of Public Health.

Moniz is one of one of the world’s foremost authorities on nuclear energy and energy policy. As the US Secretary of Energy, he directs the Department of Energy in supporting the president’s goals of growing the economy, enhancing security, and protecting the environment. He played a principal role in negotiating technical details of the US nuclear agreement with Iran.

From 1995 to 2001 under President Bill Clinton, Moniz was first the Office of Science and Technology Policy associate director for science and later was Under Secretary of the Department of Energy, where he oversaw science and energy programs, led a comprehensive review of nuclear weapons stockpile stewardship, and was a special negotiator for the disposition of Russian nuclear materials.

Moniz was born in Fall River, Mass., to Portuguese immigrant parents from the Azores. He attended Boston College, earning a bachelor’s degree in physics, and went on to receive a PhD in theoretical physics from Stanford University. In 1973, he began teaching at Massachusetts Institute of Technology, where he was the Cecil and Ida Green Professor of Physics and Engineering Systems prior to his appointment as Secretary of Energy in 2013.

Roy is a motivational speaker and a prominent advocate for victims of spinal cord injury. In October 1995, 11 seconds into his first-ever shift for the BU men’s hockey team, he slid headfirst into the boards, fracturing his fourth and fifth cervical vertebrae. The collision left him a quadriplegic at the age of 20. After two months in intensive care, Roy began rehabilitating both his body—he has regained some use of his right hand—and his life.

In 1997, he established the Travis Roy Foundation, dedicated to spinal cord research and one-on-one assistance for spinal injury cases. The foundation has raised more than $6 million, which has been used to modify vans and purchase wheelchairs, computers, ramps, shower chairs, and other adaptive equipment for paraplegics and quadriplegics. In addition, the foundation has funded more than $2 million in research focused on finding cures for spinal cord injuries.

As a motivational speaker, Roy has addressed a wide range of audiences, from Fortune 500 companies to high schools and youth groups. He also testified before a US Senate hearing for the National Institutes of Health and addressed the Massachusetts legislature in support of making the commonwealth a “stem cell safe haven.” Roy earned a bachelor’s in communication from the College of Communication.

He serves on the Shepherd Center for Spinal Cord Injury Rehabilitation board of advisors and the Tabor Academy board of trustees. Among his honors are the BU Young Alumni Award and the Christopher Reeve Spirit of Courage Award. Last year, anonymous donors gave $2.5 million to establish a professorship in his name at BU’s Sargent College of Health & Rehabilitation Sciences. His autobiography, Eleven Seconds: A Story of Tragedy, Courage & Triumph, was cowritten with Sports Illustrated writer E. M. Swift, and his hockey number, 24, has been retired by Boston University.

Alumni speaker D. A. Whatley (Questrom’15) took to the stage to give the class four “keys to success” he’s learned during his first postcollege year: ball on a budget, meaning manage your finances; spend time with family and friends; give back, whether it’s with your time, helping students from your high school, for instance, or making a donation to BU’s Class Gift; and last, enjoy yourself.

“Live in the moment, and treat yo’self,” he said.

There are 18 comments on Nina Tassler Is Commencement Speaker