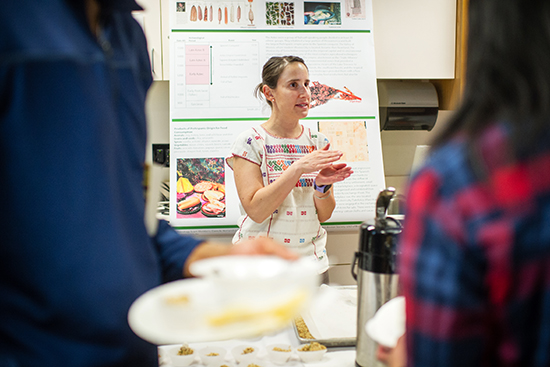 Daniela Hernández (GRS’19) explains the types of food consumed by the Aztecs. Photos by Jackie Ricciardi

The sponge cake favored by 19th-century prostitutes was dense, cloyingly sweet, and pretty much inedible to someone with today’s palate. That’s according to a group of BU archaeology, gastronomy, and culinary arts students who found the century-old recipe and used it to bake their own cake.

The dessert was featured as part of a unique event titled Eating Archaeology, held last month at the College of Arts & Sciences Gabel Museum of Archaeology. Organizers dredged up antediluvian recipes, ranging from Ancient China to 19th-century America, and dared an audience of more than 100 hungry (and brave) participants to sample the dishes.

Event director Ilaria Patania (GRS’17), a PhD student in archaeology, says her department has long wanted to do a food-related public outreach activity like this, partially inspired by shows like Iron Chef and Chopped. The student-run evening received support from the gastronomy, culinary arts, and archaeology departments, with additional funding provided by a grant from the Archaeological Institute of America–Boston Society.

“People see archaeology as a museum, as something behind glass,” says Patania, whose love of food stems from her childhood: her family operates a restaurant and hotel in her native Sicily. “So we wanted to do some outreach and get people interested in archaeology in a different way. After all, the piece behind the glass in the museum is less important than the story and the humans behind it. Real archaeology is about putting together an experience. Plus, everyone likes food.”

They figured out the recipes thanks to items found at previous archaeological digs, but it required some serious sleuthing to reconstruct them. For example, the Mycenaeans didn’t leave behind any recipes, but they did leave written lists of inventories and gifts. Combining those lists with remains found at archaeological sites, including residues left on pots found at digs, an informed guess could be made as to what a particular culture ate. Based on this archaeological record, the Bronze Age Greece team then set out to re-create recipes. They experienced some trial-and-error cooking in the process.

A cooking vessel recovered from Midea, Greece, contained traces of olive oil, chickpeas, and meat, suggesting a stew, so that’s what the Bronze Age Greece team opted to make. They created a Mycenaean lamb stew, using the above ingredients as well as lamb shanks, fennel, and Nemean wine, which is popular in Greece.

“We thought, how might we want to combine them?” says gastronomy student Caroline Pierce (MET’17). “Tomatoes and onions hadn’t yet been discovered, so I added wine and mushrooms and stewed them for two hours.”

At first glance, the cake made by the brothel team should have been the easiest dish, since they had access to an actual written recipe. When the brothel was discovered in 1993, its privy (the under portion of an outhouse) was unearthed. People at the time used privies to throw away trash, and remains of peach pits and grape seeds were found in this one. Period cookbooks contained many recipes for peach marmalade, so the brothel team hypothesized that women at the brothel made peach marmalade. Those on the team concocted their own peach preserves using a period recipe, but reduced the amount of sugar. “Victorians loved sugar—everything was loaded with it,” says archaeology student Jade Luiz (GRS’17), a brothel team member.

The team also wanted to make a sponge cake, so again they turned to a period recipe. But, “these 1880s recipes were from home cooks who knew how to cook already,” says Luiz, so the measurements were often estimates, like “have in one dish some white of an egg beaten, and in another some powdered loaf-sugar.”

“We found their recipes inedible, like a brick,” she says. “It tasted like burned scrambled eggs, with sugar.” They tried a second recipe, adjusted the amounts, and finally came up with an edible sponge cake. “It’s like we were playing detective; there was so much guesswork,” Luiz says.

The Precolonial Aztec team created a chocolate drink, along with amaranth and honey treats (similar to today’s granola bars), pork tamales, and bean tamales. “It was important to use the ingredients we know they had,” says archaeology student Daniela Hernández (GRS’19). “Garlic, onion, cumin, staples we think about in today’s Mexican cooking, those didn’t exist at this time.” On the menu at the Bronze Age China table was roasted pork porridge, cooked in pottery made to resemble ancient Chinese vessels, which Patania had commissioned from a local potter.

As an Italian living in America, Patania says that for her, cooking is a way to be reminded of home. “I brought a pot from home, and when I cook with it, it reinforces my identity,” she says. “Humans have been immigrants and emigrants forever. What do you bring with you to new places? Tools, and what you eat. These are ties to previous lives, and a way to feel at home. This is archaeology at its best. Food is archaeology. It’s not a pot in a museum.”

Cooking Up the Past