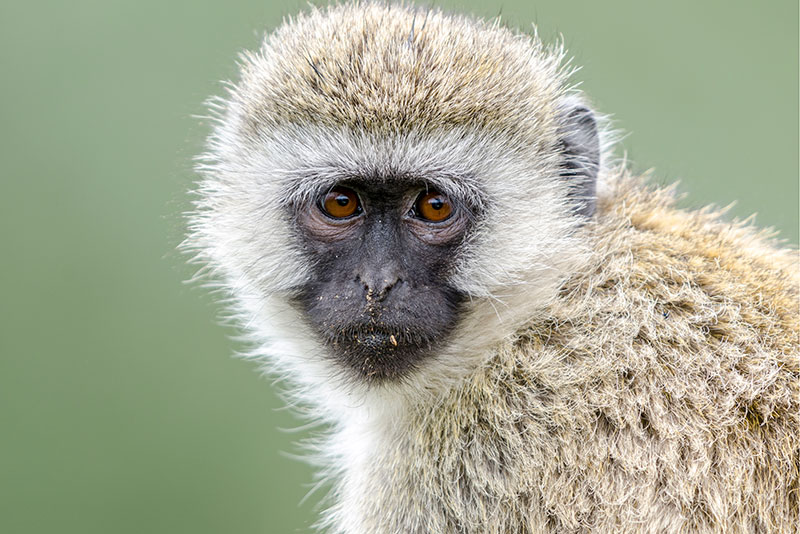 People may suspect that Christopher Schmitt, a Boston University assistant professor of anthropology, was drawn to study vervet monkeys because of their intelligence, irresistible cuteness, and curious, most distinctive characteristic: their brilliant blue scrotums. While all these things are fascinating—he does use #BlueScrotumSummer to catalog some of his fieldwork on social media—it’s another feature that attracts scientists like Schmitt to vervets: their genes.

Schmitt studies vervets in the wild, and also in a captive colony at Wake Forest University, where most of the monkeys are pedigreed and genotyped. Some of the captive monkeys also become obese, a trait uncommon in the vervets’ wild cousins and of particular interest to Schmitt, who is searching for a genomic role in the disease. “I look at developmental patterns that lead to adult-onset obesity in order to understand better about why we become obese,” says Schmitt. “And I also work with these animals in the wild so that I can understand the ecological context for these developmental patterns.”

BU Research spoke to Schmitt about monkey development, genes, and the joys of working with vervets in the field. The following interview has been edited and condensed for
clarity.

Schmitt: Yeah, a lot of people wonder why I’m in an anthropology department studying monkeys, but biological anthropology is actually the study of human evolutionary history. We try to understand primate biology in order to understand more about what makes us human.

A lot of people would say vervet monkeys aren’t much like humans.

You’d be surprised! My postdoc at UCLA is where I started working with the vervet monkeys, partly to study how they resist developing AIDS when infected with immunodeficiency viruses, something we found vervets have evolved to do in a few different ways. To do this, I traveled across Africa and the Caribbean, and we trapped, measured, and collected biological samples from hundreds of vervets.

What does that mean, “collected biological samples”?

Well, one thing we do is swab all their orifices.

Do you advertise that at the Undergraduate Research Opportunities Program (UROP)? “How would you like to swab a monkey anus?”

Well, my UROP students this summer actually did collect samples fresh from the butt of a vervet monkey in order to get feces that haven’t been contaminated by hitting the ground. The reason we do that is so that we can get a good representation of the microbiome communities inside the gut.

Yes. Especially when talking about obesity. There’s this idea that the ratio of two different families of bacteria—the Firmicutes and the Bacteroidetes—is strongly tied to body condition in humans. People who are obese tend to have a different proportion of those bacteria, versus people who are not obese. We’ve found in other species that this correspondence holds as well. So we’re very interested in how the microbiome in the gut actually does influence body condition in these animals, and we’re planning to compare the gut microbiome of vervets in captivity versus those that are in the wild, to see if the gut microbiome can be implicated. On a related note, Jenny Tung, who’s a researcher at Duke University, recently found that gene expression patterns are very, very different between two populations of baboons, one that forages on human foods and one that doesn’t, so I’d like to do some work comparing how expression levels of obesity-related genes differ between the captive and wild vervets as well.

Are there obese vervets in the wild?

We don’t usually see obese animals in the wild, except where they run into humans. But within the vervet captive colony, there’s a certain proportion—around 16 percent—that becomes obese, even though they’re all eating the same diet, a standard monkey chow. Among those, a smaller proportion of them become chronically obese—they’re obese for years at a time. I found that not only is there a genetic component to becoming obese in the first place, but there’s also a genetic component to this developmental pattern leading to chronic obesity. When we looked at whole genome sequences to find out what’s going on, we found some correspondence with regions of the genome that we know associate with human metabolic problems.

I’m feeling bad for these obese vervets. Are they eating more monkey chow or just sitting around more?

Well, this is one of the things we need to find out. This kind of genotype-forward approach can be difficult, because we get a hit—we get a region of the genome that we know associates—and the pathway to getting from that to an actual intervention that we can use with humans, it’s a long pathway.

I assume that genomics is not the way people have always studied primates.

Does this mean scientists are not going to chase monkeys around in the field anymore? Are you just going to look at data on your computer?

As somebody who really enjoys fieldwork, that’s something I worried about. In my first postdoc, getting more and more into the genomics, I was like, “Okay, am I going to sit in front of a computer and just run programs in order to understand this variation? Or am I going to be able to take this back to the whole organism and understand it better that way?” I really think using a combination of these two approaches, the genotype-forward and the phenotype-back approach, is actually a really great way of keeping more traditional methods of understanding and measuring organismal variation linked to the increasingly micro and data-driven ways in which we study biology.

Why Do Monkeys Get Fat?