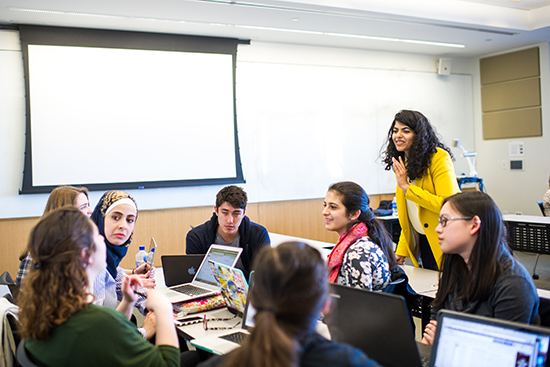 Noora Lori, a Pardee School of Global Studies and CAS assistant professor of international relations, and her students worked to create an app to help urban refugees find services. Photo by Jacki Ricciardi

As students in an innovative Pardee School of Global Studies course last spring on the challenges of forced migration learned, sometimes even the most overwhelming situations can be improved by simple, but powerful solutions. In what became a semester-long exercise leading to the creation of a smartphone app for Syrian refugees in Jordan, Noora Lori’s students found that it’s best to begin with a narrow focus and work out the bugs step-by-step.

On college campuses, including BU’s, students have become more active in migration studies and advocacy as global media attention has increased and stories of refugee hardships and deaths dominate headlines. When you hear the numbers, and realize the scale of the needs, it is easy to feel overwhelmed: 60 million people displaced worldwide, the highest number since World War II, and 20 million living as refugees outside their home countries. What, asked Lori, a Pardee School and College of Arts & Sciences assistant professor of international relations, could the students in her Forced Migration and Human Trafficking class do to comprehend, and respond to, a crisis so urgent, yet so far away?

It’s a subject Lori has long been interested in. Her research broadly focuses on the political economy of migration, the development of security institutions and international migration control, and the establishment and growth of national identity systems. She founded the Pardee School Initiative on Forced Migration and Human Trafficking soon after she came to BU in spring 2015, and she has expanded her research to include refugees in addition to other migrant communities.

At the beginning of last spring’s class, Lori tasked her students with coming up with an innovative solution that could have a direct impact in the lives of Syrian refugees living in Jordan. The class comprised 25 students, both undergraduate and graduate, coincidentally all women.

The students could create their own syllabi, bound only by the mandate of developing some type of incubator—a collaborative effort that would help NGOs and community organizations on the ground in Jordan better deliver services to refugees. With Lori’s encouragement, they were off and running, devoting considerable time outside class to a project that ignited their desire to improve life for some of the world’s refugees. They came up with a simple solution that addresses one of the central problems facing the overwhelming majority of Syrian refugees in Jordan, those living in urban areas, not in refugee camps (80 percent of the 650,000 Syrian refugees currently in Jordan): how to access services and aid.

The students’ initial research showed that there is no comprehensive and accessible database of organizations (either local or international), clinics, or schools that serve Syrian refugees in Jordan. This stymies their access to aid, and organizations’ ability to help. Obtaining aid thus drops precipitously for refugees not living in camps. To address these issues, the students settled on the idea of developing a locator app that would “put aid on the map” and make it easier for refugees to find services and providers to connect with those needing help.

The students named their project Urban Refuge. After the idea for a digital solution took shape, the class divided into teams, with each tackling a different aspect of app development. The semester ended with an app blueprint that had a pitch deck to show to funders, screenshots of what the app would look like, the basic coding, and a database with nearly 200 organizations, schools, and clinics geocoded by latitude and longitude.

Modeled after the BU Mobile app, the Urban Refuge app aims to be as close to a one-stop shop for service location as possible. And while the pilot will be in Jordan, the hope is that it can later be launched elsewhere. Despite the common perception that refugees live mainly in camps, two-thirds of the world’s refugees live outside of camps, with increasing access to smartphones and mobile technologies. So easily accessible apps like Urban Refuge can help connect them with services and aid.

The project has been an interdisciplinary endeavor. Students from the BU Global App Initiative, a group of mostly computer science students, taught Lori’s students the basics of coding and app development. Students from the BU Venture Accelerator consulted on the project’s potential to become a start-up and advised the class how to best articulate their vision to potential funders. Garima Sharma (COM’16), a graduate student in the BU Media Ventures program in Los Angeles, also taught students about app pitching, start-ups, and women in tech and entrepreneurship. Kenneth Freeman, Allen Questrom Professor and Dean of the Questrom School of Business, connected the class with the BUzz Lab, the school’s “hive of innovation.” And faculty and students in public health, law, and computer science helped to identify issues and work to resolve them.

The students in the Pardee class were also helped by partners in Jordan, including Caritas and Q-Perspective, as well as Syrian and Jordanian peer consultants. Boston-area support came from the Boston Consortium for Arab Region Studies at Northeastern University, which sponsored a fact-finding mission for Lori and graduate student Vicky Kelberer (CAS’12, GRS’17) in March, as well as Patient Ping, a virtual network for health care providers, Microsoft Northeast, and Northeastern University Middle East Center codirector Denis Sullivan, a professor of political science and international affairs. Lori also met with a team from Google at its California headquarters who helped the students refine their mission and purpose.

Over the semester, the class received assistance and guidance from Syrian native Abeer Massri (LAW’15), who gave pro bono legal advice and translation services, as well as from Questrom, College of Engineering, and CAS computer science department students.

“I thought, I’m going to learn a lot, too,” says Lori. “We would use the students’ creativity and new technologies, bring in alumni, consult with an entire network of businessmen and -women with expertise in technical fields.” The result far exceeded her expectations.

The students agree. “It has been the highlight of my college experience to work on Urban Refuge with a team whose members are all equally passionate,” says Meaghan Delaney (CAS’18).

This past summer, the students signed on to voluntarily continue with the project until it can be tested in Amman. Lisa Kadel, who spent the past year at BU as an exchange student and is continuing with the project from her home in Germany, says that “apart from being a wonderful opportunity to develop professional skills, such as teamwork and networking, the class was eye-opening in terms of understanding what connections between academic work and activism can look like.”

The students recently launched a fundraising campaign on the new BU Crowdfunding platform, with the goal of raising $15,000 to complete their database and coding and conduct outreach with refugees in Jordan.

By leveraging the resources and brainpower at BU, Lori’s class has been able to design a digital solution to help with a growing crisis, demonstrating that local actions can have a global impact, starting in the classroom and expanding beyond borders to reach refugees around the world.

Vicky Kelberer, an undergraduate academic advisor and master’s degree candidate at the Pardee School of Global Studies, is the graduate cochair of the Pardee School Initiative on Forced Migration and Human Trafficking. She can be reached at vickyk1@bu.edu.

Susan Seligson can be reached at sueselig@bu.edu.