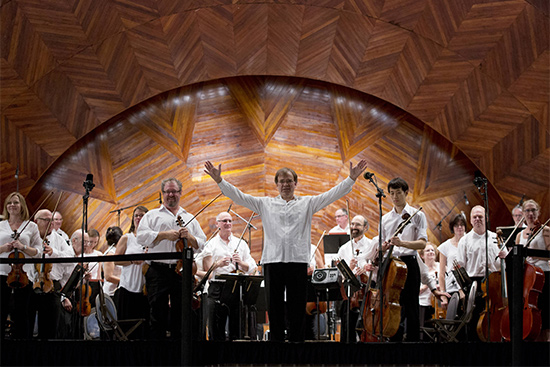 A favorite summer tradition in Boston—the free weekly summer concert series presented by the Boston Landmarks Orchestra (BLO)—returns to the banks of the Charles River tonight for its 15th season with a concert of music of the wilds and the countryside.

Made up of local professional musicians, the BLO is known for performing a repertoire that is both eclectic and inclusive, and its summer concert series at the Hatch Shell on Boston’s Charles River Esplanade now draws thousands each week. The orchestra also performs at schools, parks, and community centers in some of the city’s most diverse neighborhoods.

For tonight’s season opener, the BLO will perform the overture from Ralph Vaughan Williams’ The Wasps, composed in 1909; Ottorino Respighi’s The Pines of Rome, the first piece to introduce recorded birdsong into concert music in 1924; the Chinese composer Tan Dun’s Secrets of Wind and Birds, commissioned by Carnegie Hall for the National Youth Orchestra of the United States of America’s tour of China in 2015; and American composer Michael Gandolfi’s The Gardens of Cosmic Speculation, Part I, inspired by the 30-acre Southwest Scotland sculpture garden created by landscape architect Charles Jencks, originally commissioned by the Boston Symphony Orchestra and the Tanglewood Music Center.

Led by music director Christopher Wilkins, tonight’s concert will also include a performance of Aaron Copland’s Music for Movies. Best known for his compositions for the ballets Appalachian Spring, Billy the Kid, and Rodeo, and for his magisterial Fanfare for the Common Man, Copland was also a gifted film composer. He scored the soundtracks for such Hollywood classics as Our Town, Of Mice and Men, and William Wyler’s The Heiress, which earned him an Academy Award in 1949.

Other upcoming BLO Hatch Shell concerts: Pictures at an Exhibition, an evening honoring the life and passions of Isabella Stewart Gardner, the founder of the eponymous Fenway museum, on July 20; Verdi & Valkyries, music by Giacomo Puccini and Giuseppe Verdi, on July 27; no concert August 3 (On the Town will be screened); Landmarks Lollapalooza, an open-air festival of classics by George Gershwin, John Adams, and Edvard Grieg, and the world premiere of Gonzalo Grau’s Elements, on August 10; Footloose and Fancy Free, a celebration of American and international dance, on August 17; the annual performance by the Longwood Symphony Orchestra, Boston’s medical community orchestra, on August 24; and a concert performance, in collaboration with Commonwealth Shakespeare Company, of Richard Rodgers’ and Lorenz Hart’s classic Broadway musical The Boys from Syracuse, on August 31. More information about these concerts and the BLO’s neighborhood concerts and educational programs, can be found here.

The Boston Landmarks Orchestra performs tonight, Wednesday, July 13, and every Wednesday through August 31, at the Hatch Shell at 7 p.m. All concerts are free. In the event of rain, tonight’s concert will be played tomorrow, Thursday, July 14, at the Hatch Shell, or if it rains again, indoors at MIT’s Kresge Auditorium, 58 Massachusetts Ave., Cambridge. Take any MBTA Green Line trolley to Park Street, transfer to an outbound Red Line train to Charles/MGH. Find information about weather cancellations here.

There are 2 comments on Boston Landmarks Orchestra Opens 15th Season