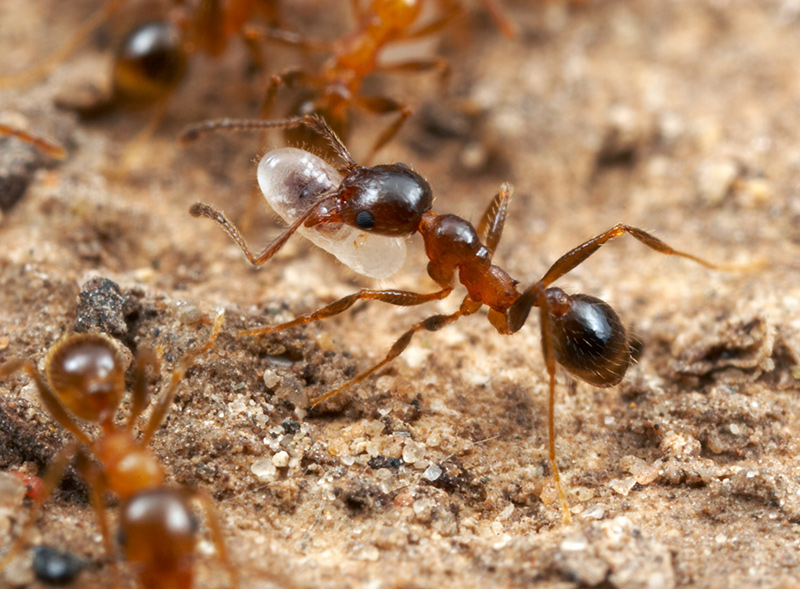 P. dentata minor workers caring for larvae. Scientists found, surprisingly, that older workers did the job as well as young ones: “Type A personalities with no burnout!” says biologist James Traniello. Photo by Alex Wild

It’s a poignant fact of life: no matter how much we exercise, or how many wheatgrass smoothies we slurp, our bodies still age. As the years pass, skin wrinkles, eyesight falters, hearing fades. It’s called senescence—the natural course of aging. All animals succumb, except a rare and lucky few: the rougheye rockfish, for instance, can live more than 200 years with negligible signs of aging; ocean quahogs more than 500 years before dying from disease, accident, or predation. Such rare, ageless animals are a scientific curiosity, perhaps holding clues to how and why we humans age. And now, scientists at Boston University have added another critter to the list of forever young: minor workers of the ant Pheidole dentata.

A new study, published on January 6, 2016, in the Proceedings of the Royal Society B, reports that P. dentata minor workers, which live up to 140 days in the laboratory, show no signs of age-related decline before they die. None. Since ants are a social species, this new discovery may hold meaning for the social animal we care most about: humans.

“I don’t want to make any claims that the ant brains are just like human brains, because of course they’re very different,” says Ysabel Giraldo (GRS’14), a postdoctoral fellow at the California Institute of Technology and lead author on the paper. “But when we observe social insect behavior, there’s something that is attractive and interesting because we think, well, maybe this parallels something about our own social organization.” Giraldo earned a PhD in biology from BU in 2014, and her thesis research—funded by the National Institute on Aging and the National Science Foundation and winner of the prestigious Belamarich Award for best biology dissertation—formed the basis for the new Royal Society paper. “By looking at social insects, maybe we can learn something about how social interactions shape behavior or neurobiology that we can’t learn in a solitary system,” she says.

The idea of studying how ants age began as a conversation between Giraldo and biology professor James Traniello, co-lead author on the Royal Society paper and Giraldo’s thesis advisor, about the work of Robert Friedlander, a physician at Brigham and Women’s Hospital who studies the role of cell death in neurodegenerative disorders like Alzheimer’s and Parkinson’s. “We were reading some literature on Alzheimer’s and human aging and some of the molecular mechanisms, looking at cell death in the brain,” says Giraldo. “And some of those conversations just got us wondering, ‘What goes on in ant brains?’”

She decided to find out. Her plan: examine hundreds of P. dentata minor workers—the “lab rat” of Traniello’s lab—and look for similar phenomena that occur in humans as we age: more cell death in certain areas of the brain, lower levels of certain important neurotransmitters, like dopamine and serotonin, and poorer performance on daily tasks. Worker ants, of course, have different daily tasks than most of us. Their jobs include caring for larvae, following pheromone trails to cooperatively collect food, and scavenging dead insects. Measuring the ants’ performance took persistence, patience, and ingenuity. To see how well worker ants followed a pheromone trail, for instance, researchers laid down an artificial chemical trail and filmed the ants following it, noting how many times they strayed more than one centimeter off course. It took Giraldo and her colleagues about two years to gather the data. When she analyzed it, she and Traniello were astonished at the results.

“We knew that workers start out in life not being terribly good at things, but then they acquire behavior and expand their repertoires,” says Traniello. “So we expected that there would be a normal curve for these kinds of functions—they’d improve, they’d peak, and then decline. It would be like us humans: our hearing starts to fade, our vision starts to fade, motor coordination starts to fade, memory starts to fade—this is a great portrayal of life, isn’t it?—and then eventually we die. So we thought we’d see the same kind of things going on in ants, but we didn’t.”

In fact, the ants didn’t age in any way that the scientists measured, and some of their behaviors, like the ability to follow pheromone trails, actually improved. The ants also became more active as they aged, a model for all us couch potatoes who slump ever further into the cushions with every passing year.

The big questions are, how? And why? And how can we be more like ants, at least in their ability to dodge senescence? The answers, for now, are: we don’t know, we don’t know and no, not yet. “We had a lot of conversations about what is going on. And the short answer is that there’s a lot more research to do,” says Giraldo. Maybe advanced social organization makes ant brains more efficient and resilient, says Giraldo, or maybe it’s because workers don’t reproduce, or because they live in a low-oxygen environment. “It’s not one simple answer,” she says.

The scientists also aren’t sure why the ageless ants actually die, other than accident or predation. Nor are they yet able to answer the converse of that question: is there something that could make the ants age? Coffee? Cigarettes? Booze? Bad music? “Probably network television,” offers Traniello.

Traniello says the work tells us a lot about how behavioral development and senescence proceed (or don’t) in the brains of social insects. “Hopefully it will be a significant contribution to the field,” he says. But the research is unlikely to produce an ant-based anti-aging serum, at least not anytime soon. Rather, the work answers some small questions that may in time answer some bigger questions.

“That’s the beauty of basic research,” says Giraldo. “If we’re willing to ask some really basic scientific questions and broaden our perspective, we can get some interesting insights into how neural systems work and maybe how aging works.”