Bobby Kasthuri needs a map. Not your everyday, get-me-to-Kenmore-Square kind of map. He’s got something else in mind. What Kasthuri needs is a map of all the connections in the human brain—kind of a wiring diagram for neurons. Kasthuri, an assistant professor in the department of anatomy and neurobiology at the Boston University School of Medicine, thinks that this map—the so-called “connectome”—could help explain how our brains develop from childhood and give deep insights into memory and consciousness.

But there’s a problem: the data. The map of one mouse brain would consume about two exabytes—that’s two billion gigabytes—of storage. (For comparison, the iPhone 6 comes with a mere 128 gigs.) With some creative help from a handful of high school students, Kasthuri has analyzed a sliver of mouse brain and created stunning images of neurons. The exquisitely detailed images hint at the power of big data, the complexity of the connectome, and some of the secrets that may lie waiting for us in the brain.

BU Research talked to Kasthuri of mice and men, small worms and bold ideas, and how Big Oil may save neuroscience.

BU Research: So, what is a connectome, exactly?

Kasthuri: It’s this idea that, for a brain, you know how every neuron connects to every other neuron.

Why would you want to know that?

If you look at a neuron of a human and a neuron of a mouse, they look essentially the same. We share 98 percent of our genome. So the strong hypothesis is that we have the same LEGO® blocks, but we build a huge palace with our LEGO blocks, and mice build more of a hut. And if that’s true, it would imply that connections are deeply correlative and causative to things like our memories, our personalities, and our fears. The connectome would be the map of that. 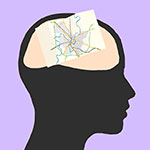 So far, scientists have mapped the connectome of one organism, and that’s a worm called C. elegans?

So the worm has 302 neurons. How many neurons do people have?

That seems insanely difficult. Where do you start?

We start with a big volume of an adult mouse brain, let’s say a millimeter cubed.

That’s it? I was thinking you’d do half the brain. 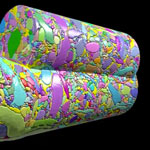 So you take this little teeny-weeny part of the mouse brain, and what do you do with it?

You have to cut it in slices, take a picture of each slice, and then put the images back together on the computer. But here’s the problem: a millimeter cubed, at the resolution we would like, is about two million gigabytes of data.

Can you compare that to something that people would understand?

So the whole human genome is about three to five gigabytes.

You’re right! But listen, when they sequenced the genome in the ’90s, people were like, “three to five gigabytes? That’s impossible.” But they did it. Now I’m talking about 200,000 times more, but the world is being pushed toward this, independent of what we do.

Exactly. Everybody needs somewhere to put their data. Maybe the Google guys will figure it out.

I think Google might figure it out. I’ve heard that the people who work with the biggest data sets in the world are oil companies, because they make these tremendous models of where the oil is. And for them, finding the oil is worth the investment of supercomputers and huge data sets.

So, once you’ve sliced up this little bit of mouse brain, can you do anything with it? 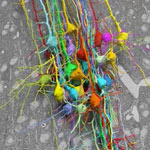 OK, that’s fair. So now I have two million gigabytes of information. And now we get to the hard part, the really, truly hard part: humans are very good at following the same neuron from section to section to section, but computers are much worse than us. So we have to figure out a way to analyze two million gigabytes of data with some combination of computers and humans.

So here’s my current version of that: I teach neuroscience to one local high school, Masconomet Regional High School. I teach them what a neuron looks like, I teach them how to trace something, and they work on my data. So they’re free, which is an advantage for me, and it’s educational. And so far, they love it.

So you have the students trace neurons on sequential photographs, and with them helping, you’ve been able to analyze how much mouse brain?

Barely a fraction of the mouse brain. It’s so small, it’s embarrassing. We’re going to get faster, I hope, if I have any chance of making a career out of this. But this is the new reality. And the question is, do we want to face reality or not?

Sure you could. I bet there are a lot of other things you could do.

No, no. I just couldn’t do science, or at least neuroscience, I can’t go back.

What if it turns out that the connectome doesn’t matter? Maybe everything that makes us human just lies in the genes, and how they are turned on and off.

Yes, it could be. My view is not that we have the right answer, but my view is, we’ve got to try. Let’s just do it, man! I guarantee we’ll find a surprise that’s going to change how we think about brains.