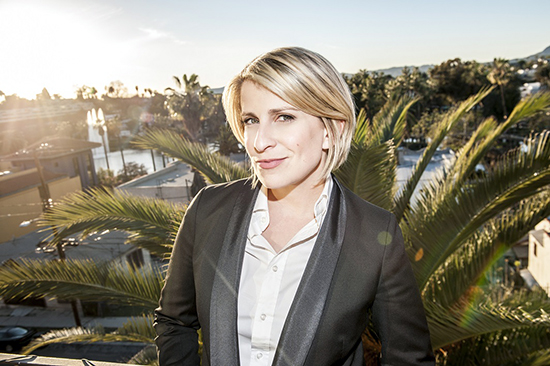 “I usually respond as a viewer to things that have a basis in reality,” says Liz Feldman (COM’99), a comedy veteran who previously wrote and produced for the CBS comedy Two Broke Girls. Photo by Lindsey Byrnes

When pitching a new TV series last year, writer Liz Feldman took to heart that old dictum write what you know. Feldman (COM’99) loosely based her new half-hour NBC sitcom One Big Happy on her friendship with her best friend at BU, Jason Allen (COM’99), and their plan, hatched while they were still in school, to someday start a family.

In One Big Happy, a lesbian woman named Lizzy (played by The Girl Next Door’s Elisha Cuthbert) sets out to have a baby with her best friend, Luke, who is straight—and male. The same day they learn they’re pregnant, he meets and marries a wild British woman, Prudence, who needs a visa to remain in the United States.

“I usually respond as a viewer to things that have a basis in reality,” says Feldman, a comedy veteran who previously wrote and produced for the CBS comedy Two Broke Girls. “Take 30 Rock—it’s inspired by Tina Fey’s life in a man’s world. There’s so much that goes into having a show on a network, and you want it to have mass appeal and feel relatable. At the same time, you have to go with your gut. There hadn’t been a lesbian lead character in a sitcom in a long time.”

Feldman’s real-life story is a bit different than the one airing each Tuesday night. She did standup in high school and was hired by Nickelodeon as a writer and performer on its variety show All That her senior year. She had promised her mom she would go to Vassar after graduating, but her plans changed after she visited a friend at BU, and on a whim, auditioned for the School of Theatre’s improv troupe SPONtaneous COMbustion. She made it, but there was one problem: to perform with the group, you had to be a BU student. So Feldman enrolled.

By that time, she says, “I was out and comfortable as a gay person, but I couldn’t wrap my head around having kids.” After becoming friends with Allen (the two later hosted a rogue radio show that aired on WTBU), she recalls that one day she was “talking with Jason about family and kids, and I asked him if he would be the father of my kids, which, looking at it now as a 37-year-old, seems so bizarre. He said yeah. I think we agreed that we loved each other, and we felt like family.”

The two moved to Los Angeles together after graduation, but their coparenting plan unraveled a decade later when Allen proposed to the woman who is now his wife. They agreed that their plan wasn’t well thought out, but the friendship endured. In fact, Allen is one of the writers on One Big Happy.

In June 2013, Feldman, who had written for television shows like Jeff Foxworthy’s Blue Collar TV, Ellen DeGeneres’ daytime talk show Ellen, and Two Broke Girls, pitched the idea of a semiautobiographical show to DeGeneres’ production company, A Very Good Production. One Big Happy got picked up and premiered on St. Patrick’s Day with DeGeneres one of the show’s executive producers and Feldman its showrunner.  A Wall Street Journal review describes the comedy as “brightly written, and tender at heart.” And while the show has earned solid ratings so far, Feldman is still waiting to learn whether NBC will renew it for next season.

The show did something a bit different last week when it was bumped from its normal spot for a special two-hour episode of The Voice. Feldman and her writing team scrambled to write an extra scene in episode three, where Lizzy flirts with a woman who turns out to be a nurse at her gynecologist’s office. The show’s stars tweeted the extra scene in the voice of the characters during the half hour that the comedy would normally air. The Hollywood Reporter lauded the show’s use of Twitter, noting that with cast members live-tweeting each episode, One Big Happy’s account had increased 55 percent since its premiere.

Feldman says a defining moment in her life occurred in 1997, when the Ellen character on DeGeneres’ sitcom Ellen came out as a lesbian. At the time, Feldman recalls, “there were no famous lesbians on TV; there was no one I could look to as a role model. When she came out, it changed my life.”

In the video above, watch the trailer for One Big Happy, a new sitcom from COM alum Liz Feldman.

Before One Big Happy premiered, Feldman had written four pilots for shows whose lead character was a lesbian, but none got picked up. Finally being able to create a series that stars a lesbian character is proof, she says, of what audiences want to see on TV—characters they can relate to. She cites other freshman comedies, like Fresh Off the Boat (about an Asian American family) and Black-ish (an African American family), as more evidence that audiences want to see themselves on the small screen. “To see a version of yourself on TV is incredibly validating,” she says. “I look at TV as a mirror, and TV paves the way for what is acceptable in society. I think people were bored by the same old thing. I hope the moment is right to connect with audiences who haven’t felt represented before in what they watch.”

The Woman Behind NBC’s Newest Comedy