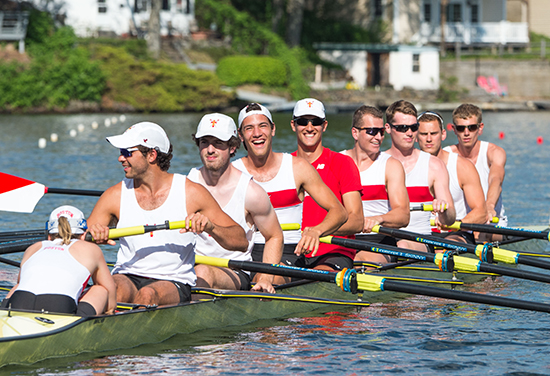 At their most recent regatta, the Eastern Sprints in May, men’s rowing’s second varsity boat won a silver medal, and the fourth varsity boat took home a bronze. The Terriers are hoping to repeat their success again this weekend at the IRA Championships. Photo by Charlie Abrahams

When the BU men’s rowing team competes in the 113th Intercollegiate Rowing Association (IRA) Championships on Mercer Lake in Mercer County, N.J., starting today, they will be competing with the best crews in the country for a chance to medal in what many consider the collegiate rowing event of the year. Last year, the Terriers finished sixth overall in team points in the regatta.

“The level of competition between the boats this year is really tight,” says Head Coach Tom Bohrer, a two-time Olympic medalist and a 2010 National Rowing Hall of Fame inductee. “Our goal is to make it into the finals and race for a medal… Over the last three years we’ve been able to put all of our boats—first varsity, second varsity, third varsity, fourth varsity—in the finals, and this year we’re one of three teams that has put every boat into the finals.”

Since becoming head coach in 2009, Bohrer has seen his team ranked annually among the top 10 programs in the US Rowing Collegiate Poll. The University of Washington and the University of California are currently the two top programs in the country. Heading into this weekend’s IRA regatta, BU’s varsity eight boat is ranked eighth nationally. Prior to the Eastern Sprints regional championship held on May 17 in Worcester, Mass., the team’s varsity eight boat had enjoyed an undefeated cup-racing season, with an overall record of 8-1; their only defeat was against powerhouse California. They placed sixth at the Eastern Sprints.

Team cocaptain and varsity eight stroke Kep Edwards (Questrom’15) says they’ve worked hard in the two weeks since the Eastern Sprints to make sure they have a better showing at this weekend’s races. “The technical ability is all there,” Edwards says, “but it’s about being in those race sessions—being down in the first 1,000 meters in a 2,000 meter race, and pushing through. It’s about addressing our weaknesses, which we’ve been doing.”

The Terriers’ other boats fared better at the Eastern Sprints—the second varsity team won a silver medal, which was the highest finish ever for a second varsity eight boat in the competition’s history, and the fourth varsity team took home a bronze medal.

Now that classes are over, the team has been vigorously preparing for the IRA Championships by practicing twice a day. Coaches have specifically worked with the team on fine-tuning techniques, such as the precise angle at which blades enter the water, and stressing the importance of moving in unison.

“The nice thing about not having school is we can take advantage of the best water on the river, at 7:30 a.m. when there are no other crews out there,” Bohrer says. “We don’t have a time crunch, so we can stop the boat, talk to them, and really coach.”

No matter how the team fares this weekend, Bohrer has been pleased with the program’s ongoing improvement. He gets nostalgic talking about this year’s group of athletes.

“I think we have a great group of kids who really work well together,” he says. “The strength of the team as a whole, not just on a rowing level, but on a workability level and integrity and how they approach things, their professionalism, is really as good as you can ask for. Anything we can get at the IRAs is going to cap that off.”

Also competing at the regatta this weekend is the women’s lightweight rowing team. They made their debut at the IRA Championships last year and plan to place three boats—the varsity eight, the second varsity eight, and a varsity two boat—in this weekend’s event.

The Boston University men’s rowing team will race four boats in the 113th annual IRA Championships, and the women’s lightweight rowing team will race three boats, beginning with the first round heats today, Friday, May 29. The top two finishers in each heat will advance to the semifinals on Saturday, and the top three finishers in those races will compete in the grand finals on Sunday. All races will be held on Mercer Lake in Windsor Park, N.J. Find a full list of heats and schedules at IRA Championship Central.

There is 1 comment on Terriers Head to IRA Championships