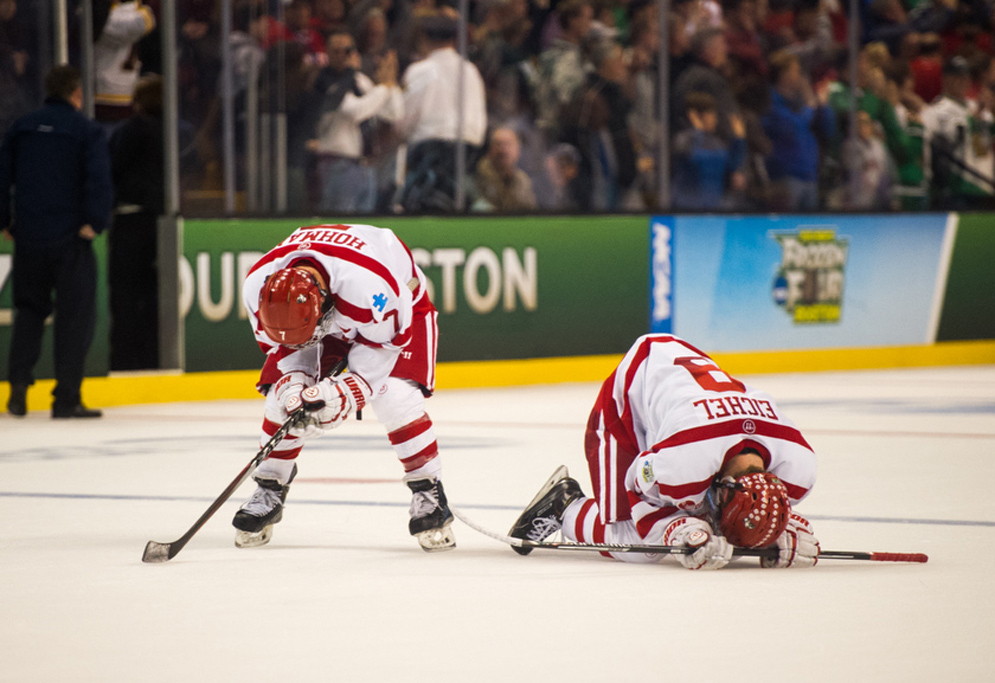 The end of an extraordinary season: losing hurts, but Cason Hohmann (Questrom’16) (left), Jack Eichel (CGS’16), and all the Terriers have much to be proud of. Photo by Cydney Scott

The remarkable turnaround season of the Terrier men’s hockey team came to a painful close Saturday night when the Terriers fell to Providence College 4-3 in the NCAA National Division I Championship at TD Garden.

The Providence Friars drew first blood, with 10:35 left in the opening period, on a blast by defenseman Anthony Florentino from just above the right circle. Only minutes after Florentino’s goal, BU set a new Frozen Four record by scoring two goals just four seconds apart, the first by Ahti Oksanen (COM’16), the second by Danny O’Regan (COM’16).

The period ended at 2-1, but a BU penalty left the Terriers shorthanded into the start of the second period. Another interference call, against defenseman John MacLeod (CGS’16), put Providence up a man again, and the team capitalized. Mark Jankowski banged one past goalie Matt O’Connor (Questrom’16) from the right circle with 15:31 to go in the period to tie the game at 2.

The Terriers responded with a furious offense that bought them a shot lead of 32-14 midway through the second period. And after an icing call on Providence, forward Cason Hohmann (Questrom’16) won the draw and slammed the puck past falling goalkeeper Jon Gillies with 8:24 left in the period.

The third period found Providence on the power play after Jack Eichel (CGS’16) was called for hooking with 15:27 to go, but despite multiple faceoffs in the BU zone, the Terriers managed to kill the penalty. They were leading 3-2, when Providence defenseman Tom Parisi sent the puck sailing high to the right quadrant and into the heel of O’Connor’s glove. The puck dropped to the ice, and O’Connor knocked it into his own goal.

Coach David Quinn (CAS ’89) called a timeout with 6:19 left, and rallied the troops at the bench. But less than two seconds after the ensuing faceoff in the Terriers’ end, Providence forward Brandon Tanev drove the puck past O’Connor from close range to make it 4-3 Friars.

With just under two minutes to go, Quinn pulled O’Connor in favor of an extra attacker, and the Terriers began a frenzied siege of Providence goalkeeper Gillies, to no avail.

In the locker room after the game, O’Connor said he couldn’t see the puck in his glove before he lost control of it on that key third-period play. “I thought it rolled out of it,” he said. “I tried to drop and throw it to Jack and it was too late. Everyone in this locker room deserves a lot better. They deserve to be hoisting the national championship right now.”

Eichel, winner of the 2015 Hobey Baker Award, told the team that O’Connor was the reason the Terriers were in the game. “Without him we wouldn’t have made it here and as far as we did,” he said.

Laura Brown (CAS’13), who was at TD Garden for the game, said she felt deflated, but proud. “I thought they could pull it off at the last minute—we’ve done it before,” she said.

Among the surprised and disappointed students watching the game at the George Sherman Union Metcalf Ballroom was Jack Malafronte (SAR’17). “Being born and raised in Massachusetts, this is like being from Alabama and losing the national championship in football,” he said. “I don’t want to talk to anybody for the next 24 hours.”

Quinn, who in two years took the Terriers from unimpressive to powerhouse status, had high praise for his team. “The things we’ve accomplished, when nobody thought we could do any of it, are an incredible testament to…every player, every student manager, every equipment manager. We were a team,” said Quinn. “We were a true team.”

The Terriers’ stunning season included their 30th Beanpot title, the Hockey East regular season title, and their eighth Hockey East tournament championship, and they took a 28-7-5 record into the NCAA tournament championship game. Under Quinn’s guidance, the freshman-heavy Terriers had the best offense in the country, averaging 3.89 goals per game. It all added up to an enormous turnaround from the disappointing previous season, Quinn’s first as head coach, when the team went 10-21-4.

A big reason for that was freshman sensation Eichel, who was named winner of the Hobey Baker Award on Friday, hockey’s answer to the Heisman Trophy, only the second freshman ever given the honor. He is the 2015 Hockey East scoring champion, Rookie of the Year, and Player of the Year. Eichel and Grzelcyk have been named 2015 CCM First Team All-Americans, chosen by the American Hockey Coaches Association.

But credit Quinn for drawing on experience, as a star defenseman for legendary 40-year BU coach Jack Parker (Questrom’68, Hon.’97) in the ’80s, an associate coach under Parker at BU, and later assistant coach of the NHL’s Colorado Avalanche, the position he held when BU headhunted him. He also brought a different approach to the job, reading books on psychology and coaching to hone his methods and talking to players about their lives outside the game. Whatever he did, it resulted in a hugely successful season no one could have foreseen at the end of the difficult 2013–14 campaign.

Amy Laskowski and Emmanuel Gomez contributed reporting to this story.

There are 8 comments on So Close