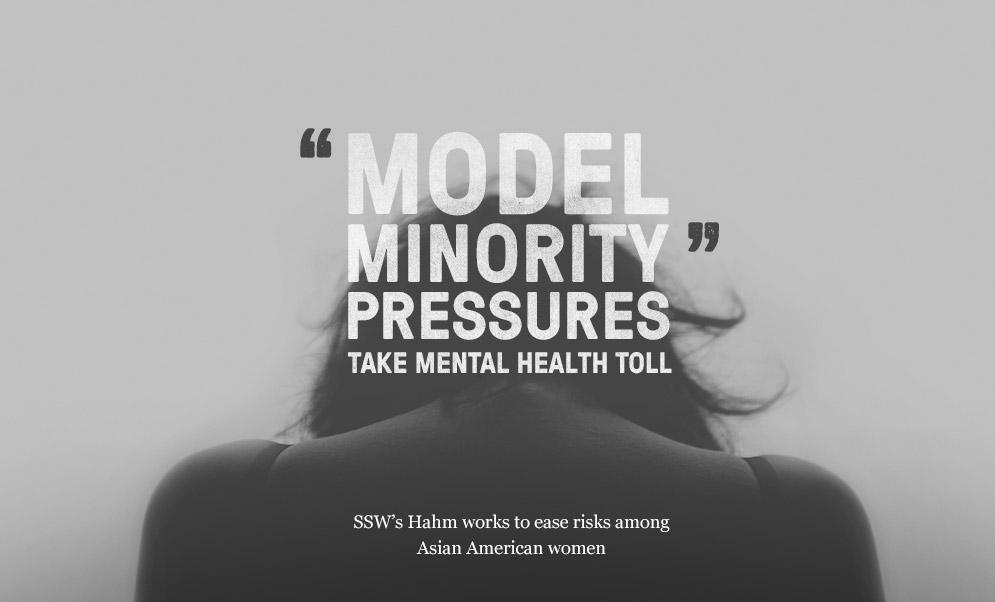 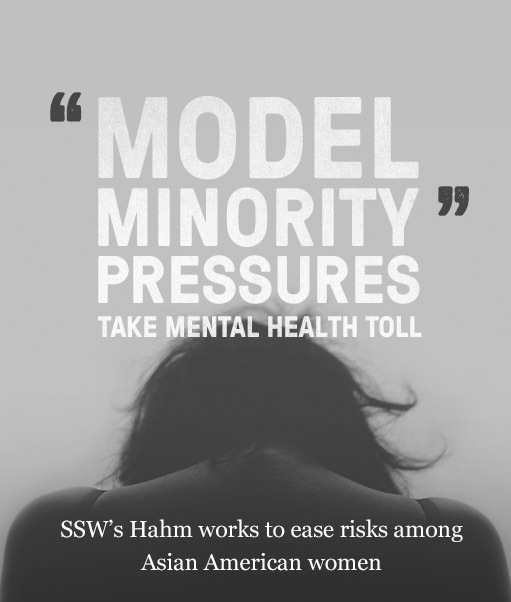 On January 27, Yale University mathematics major Luchang Wang jumped to her death from San Francisco’s Golden Gate Bridge, leaving behind a Facebook post saying that while she was in deep emotional pain, she feared that if she left school to get treatment she would not be allowed back. To Hyeouk “Chris” Hahm, a School of Social Work associate professor of social research, Wang’s death was the latest tragedy in a mental health epidemic cloaked in silence and denial.

Hahm hears it all the time—people expressing shock when they learn that among young women of all ethnicities, Asian Americans have the second highest suicide rate. (The highest rate is among Native Americans.) This data, from the National Center for Health Statistics, as well as research indicating growing alcoholism, drug abuse, and HIV risk among young Asian American women, shatters the “model minority” stereotype that casts young Asians as exemplary high achievers who put their studies and family obligations above the often-risky diversions of many of their non-Asian peers.

Asian culture is known for prizing education, and like devoted parents of all ethnicities, many Asian couples and their families commit the bulk of their financial resources to providing opportunities for their children, with this commitment reflected in the high professional success rates of Asian Americans. “Asian Americans are now the country’s best-educated, highest-earning, and fastest-growing racial group,” began a 2012 essay in the Wall Street Journal. “They share with American Jews both the distinction and the occasional burden of immigrant success.”

Hahm, who grew up in Korea, studies the weight of that burden—the cultural and social factors that can contribute to emotional stress and mental health problems among young Asian American women. She thinks it’s time to put an end to the model minority myth, which only reinforces Asian cultural taboos against seeking mental health treatment. Lives are at stake, says Hahm, who through BU-based research and support groups hopes to help young Asian American women embrace “their inherent worth and beauty, as well as grow in resilience and empowerment.” Since she began reaching out to Asian women in and beyond the BU community, the response, she says, has been overwhelming, with 720 Boston-area women to date volunteering for her study of the problem. 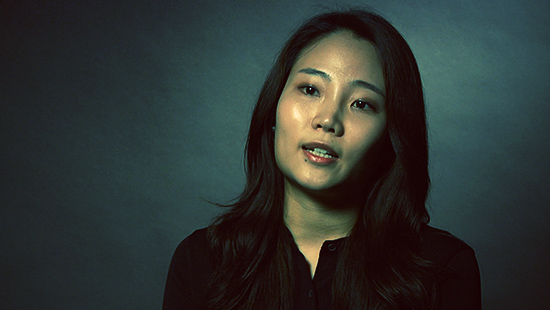 The statistics are alarming: according to the National Center for Injury Prevention and Control of the Centers for Disease Control and Prevention, for Asian Pacific Islander (API) women ages 15 to 24, suicide was the second leading cause of death, following accidental injury, between 1999 and 2007, whereas it was third for whites and sixth for blacks. For API women between 25 and 34, suicide was the third leading cause of death, behind malignant neoplasms and unintentional injury, between 1999 and 2007, while it was third for whites and ninth for blacks. More troubling, says Hahm, the rate of completed suicide among the 15-to-25 age group of Asian American women is rising rapidly, increasing by 96.3 percent from 2000 to 2009, according to a 2012 National Center for Health Statistics report. In one study spanning 1992 to 2001, the suicide rate among Asian American women ages 18 to 25 rose almost 100 percent. One in six Asian American women will consider suicide in their lifetime, while among blacks, for example, the rate is slightly over one in ten.

Hahm is a founder of SSW’s Asian American Women’s Health Initiative Project and its offshoot, a federally funded BU-based study called AWARE (Asian Women’s Action for Resilience and Empowerment), which seeks to improve the mental and sexual health of Chinese American, Vietnamese American and Korean American young women in a manner sensitive to their cultural experiences and challenges. Hahm and her team are recruiting women ages 18 to 25 for a new clinical trial to develop what she calls “the full AWARE intervention,” which includes group psychotherapy sessions that will integrate the issues of culture, family, and gender. AWARE will also offer encouragement through daily secure text messages, called AWARE Stories. Hahm says the “intervention is integrative, holistic, and innovative.”

Funded by the National Institute of Mental Health, AWARE grew out of stories Hahm heard from young Asian American women—a diverse group who have in common the fact that they are straddling mainstream American culture and their parents’ traditional culture while navigating the challenges of young adulthood. Under the AWARE umbrella, Hahm and her colleagues have published studies on self-harm and suicidal behaviors, sexual attitudes, substance abuse, suicidal behaviors among lesbian and bisexual Asian American women, and in collaboration with researchers at Harvard Medical School, a soon-to-be published study of the role of race/ethnicity and gender in depression screening and care. One study, published in January 2014 in Race and Social Problems, the journal of the Center on Race and Social Problems, examined young Asian American women’s “fractured identities” as a framework for understanding their high risk of suicidal behavior. The collaborators also published a qualitative study of the family experiences of 16 Asian American women, all children of immigrants, who had a history of self-harm or suicidal behaviors. Hahm says the studies bring together pieces of a large and nuanced picture and shed light on an urgent and previously overlooked issue. 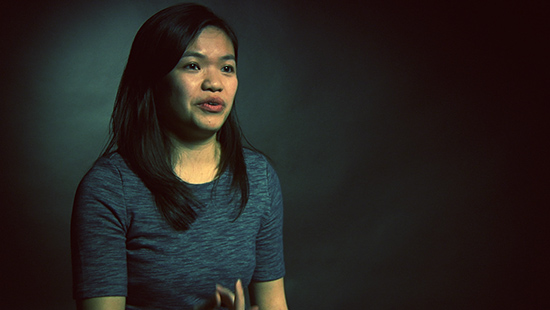 Hahm’s research shows how model stereotyping can ultimately be just as damaging to one’s self-esteem as negative stereotyping. One of the most common stereotypes is “that Asians are all good at math,” says Eunsung Kim (SHA’14), a research volunteer from Korea. “If you’re not good at math you’re a failure.” Whatever the subject, parents press for across-the-board grades of A. Non-Asians might not understand just how high are the expectations and pressure Asians face and the stigma associated with not meeting those expectations, Kim says. Cecilia Vu (CAS’13, SPH’15), a research assistant on a UROP grant, was born in the U.S. to Vietnamese parents, and she echoes Kim’s observations. “For us it’s all about staying on the path to success,” she says, and Asian parents are uncomprehending when young Asians stray from that path or succumb to the diversions common among American-born Caucasians. Vu says she herself used to think, “We Asians don’t do drugs.”

A 2012 study by the Pew Research Center showed that young Asian American women are indeed the highest educated group of women in the nation; while one in three white women have earned a college degree or higher, half of their Asian counterparts have such degrees. But as several studies over the past decade have shown, many of these women are paying a dire emotional price for their achievements. Pressured to succeed with unwavering, stoic commitment, Asian American women often suffer in silence, Hahm says.

Her studies show that the cultural taboos against seeking mental health care mean these women are the least likely to get help. In fact, almost 70 percent of Asians have never received psychotherapy, compared with other ethnic groups, which range from 50 to 30 percent. Hahm’s team recruited hundreds of subjects for a 10-week study through Facebook, Instagram, Twitter, and flyers around Boston.

“When we look at the depression rate of Asian American girls, we are talking about the elementary school level,” says Hahm. “Children. Their depression rate is higher than any other racial group. And when they move onto adolescence and then college as young adults, it’s the same trend. Their anxiety level is also high.” Although Native American suicide rates are proportionately higher than those of Asian Americans, she points out that while Native Americans have traumatic histories of persecution, Asian Americans “appear to be doing so well, right?” 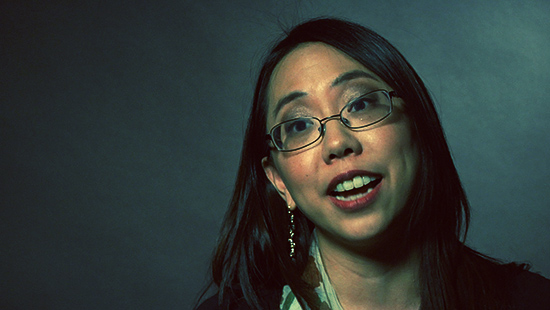 Hahm, who first came to America as an international college student, has found that Asian American women who are born in the United States are at greater risk of suicide than those born in China, Vietnam, or Korea. According to a 2009 study published in Archives of Suicide Research, nearly 17 percent of US-born Asian American women have thought about suicide, 7 percent have planned suicide, and 6.3 percent have attempted suicide, while among immigrant women the rates are about 8 percent, 2.5 percent, and 2.7 percent. Hahm had done many studies on Asian Americans’ mental health, but when she singled out suicide, the results were startling. “We investigated 720 women, and we did a paper on drug use and suicidality,” she says. “I did a qualitative study selecting 76 women to do in-depth data analysis and in-depth interviews lasting one to three hours. And we found that out of these 76 women, 36 had very strong suicidal intent or had actually attempted suicide.”

Hahm has also examined the role of parents and parenting styles in Asian American women’s mental health risks. There are the “Tiger Moms, who say their daughters have to go to an Ivy League school. The parents actually tell their daughters, we went into debt for you, you owe us money, you need to pay us back,” she says. And for girls there’s the added burden of being told that “when I get older you need to take care of me.” For some parents there is the problem of what Hahm has labeled cultural disjointment. Parents are “too Chinese, too Korean,” she says. “Their native language is a mind-set. They stick with their own culture and are very critical of anything else.” Still other parents become completely disengaged. “Physically the family may all be together, but psychologically they are disengaged, especially with fathers and daughters. You see very few Chinese or Korean fathers coaching soccer, right?” The last category she identifies is gender-prescriptive parenting. “These parents are from Asia, where gender roles are very strongly divided and prescribed, so there is a very strong notion of what girls need to do, how they must behave, and what kind of image they need to reflect as a woman,” says Hahm. It’s all about Asian views on what constitutes femininity—young girls don’t have play dates like boys. “They are to be protected,” she says. “They have to do the chores while their brothers are watching TV.”

All these factors contribute to anxiety and depression among Asian American women. “They have fractured identities,” Hahm says. “Instead of using appropriate coping, like seeking psychotherapy or confiding in others, they resort to unsafe coping mechanisms, like drinking, drugging, or engaging in one-night stands.” Asian Americans feel very strongly about maintaining a firewall between their public and private selves. “Seeking mental health help is very taboo, and women are also afraid of being the object of gossip. There are no Asians going on The Jerry Springer Show to talk about family problems. You have to be strong, and stay strong,” she says, and the stigma “is coming not only from their families but from the community too. There’s a huge respect for privacy, and the message is, don’t tell anyone about this, this is secret. But their anxiety level is so high.”

For Luchang Wang, it was unbearable.