Embryonic frogs, as well as other animals, can exit an egg early if danger presents itself

As far as housing goes, an egg is a pretty good place for a frog embryo. It offers physical protection and it keeps its inhabitant from drying out.

But like many homes with great curb appeal, eggs aren’t always the ideal dwelling. For some frog eggs, being packed in a gelatinous mass, or “clutch,” can limit the supply of oxygen. Eggs can be swept away by floods or killed by fungal pathogens, and they make a nice lunch for predators like snakes and wasps. Faced with such peril, it might seem that the eggs have little hope of hatching alive, but red­-eyed treefrog embryos have a few survival tricks up their sleeve. 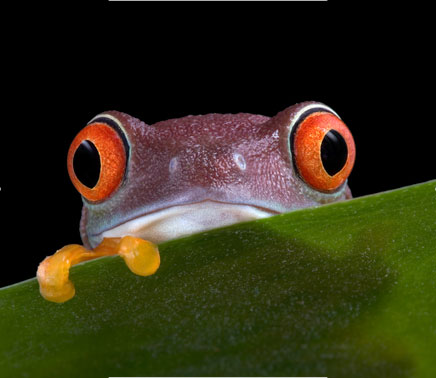 The photogenic red-eyed treefrog makes its home in rainforests from Mexico to Colombia.

Biologist Karen Warkentin has found that these embryos are capable of assessing a variety of threats in surprising ways, and if danger presents itself, they can choose to hatch days earlier than they typically would. The process is called environmentally cued hatching, and in the last decade researchers have found evidence that it works for all kinds of animals—from flatworms and snails to fishes, from frogs and salamanders to turtles and birds.

“Hatching is a controlled, regulated response,” says Warkentin, a Boston University College of Arts & Sciences (CAS) associate professor of biology. “At some point, the embryos will decide to do it. It’s amazing the information they attend to.”

Environmentally cued hatching, says Warkentin, is part of a bigger story, and it has led to a collective shift in thinking about development. Until the 1990s, biologists believed that animals that begin life in an egg hatch at a fixed time, regardless of what’s going on around them. Red-eyed treefrog eggs, for example, typically hatch at six or seven days. As a frog embryo develops, it releases enzymes through glands in its head that break down the egg membrane, eventually allowing a tadpole to muscle its way out. But recent research by Warkentin and other scientists shows that many animals have the ability to scrap those plans. As a result, she says, researchers no longer look at hatching—and development in general—as a process that has a fixed timetable, but rather one that is “fundamentally responsive and contextual.”

“Incorporating this plasticity into our thinking about biology is transformative,” Warkentin says. “It’s changing how we think about how life works.”

Her current research, funded by a five­-year National Science Foundation grant, focuses on two of the factors that can trigger early hatching in red­-eyed treefrogs: vibrations that disturb the clutches, and a lack of oxygen, or hypoxia. “These are things that lots of eggs over a broad range of organisms—vertebrates and invertebrates—respond to,” she says. “They seem to be pretty widespread hatching cues and sources of information for embryos.” She is asking an array of questions about how and why the embryo’s behavior changes during development—from the animal’s first few days to the time it hatches. 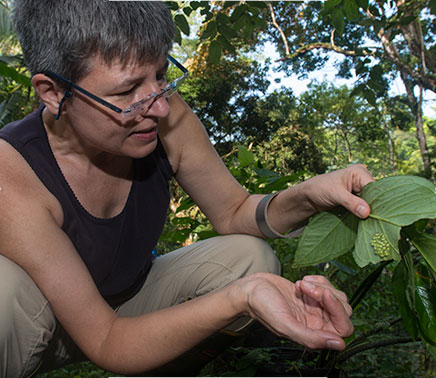 Warkentin, who does much of her fieldwork at the Smithsonian Tropical Research Institute in Gamboa, Panama, has been studying red­-eyed treefrog eggs for more than 20 years. “She’s the leader in this whole area of environmentally cued hatching,” says Karen Martin, a professor of biology and the Frank R. Seaver Chair of Natural Science at Pepperdine University. “I think she has framed this question in a way that is very thought ­provoking. It makes people think a little bit more about embryos as being agents in their world instead of passive recipients of their genetic programming. They’re actually noticing the environment around them, and they’re actually responding.”

Better Not to Wait

The photogenic red-­eyed treefrog makes its home in rain forests from Mexico to Colombia. During the breeding season, from May to November in Panama, female frogs lay clutches of eggs—40 or so eggs per clutch—on leaves and other vegetation overhanging ponds and swamps. At six or seven days, the tadpoles emerge and drop into the water.

But there are times when it’s better not to wait that long. If the eggs fall into the pond—an accident that will cut off their air supply—embryos can hatch in as little as three days. Warkentin is trying to learn what level of hypoxia induces hatching, how long the embryos take to decide to hatch, and how their oxygen needs and hatching ability change during development. 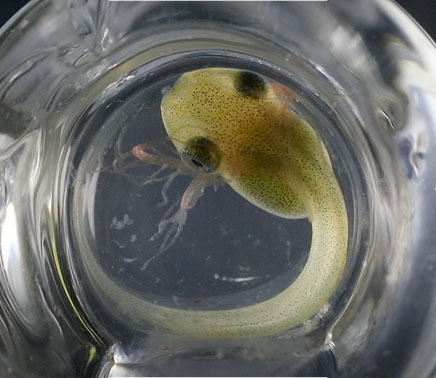 A red-eyed treefrog embryo developing in a glass egg cup. The cup blocks evaporation from the back and sides of the egg and allows oxygen to enter at the front—as in a normal clutch.

In the lab, she looks for answers using tiny glass cups just the right size for a dollhouse kitchen. (She commissioned 30 of them from a Newton, Mass., glass artist.) Warkentin places a single frog egg in a cup, and puts the cup in a chamber fronted with a glass microscope slide. She fills the chamber with boiled, degassed water, and videotapes what happens next. In one video, the embryo wriggles around inside the egg in search of oxygen, and, failing to find enough air, begins pushing at the egg. Seconds later, it squeezes out.

Warkentin can also manipulate the environment inside the chamber with embryos of different ages and watch how the frogs behave. “We know what makes them hatch is a lack of oxygen,” she says. “They become sensitive to that cue really young and respond to it behaviorally long before they can hatch. So, probably their ability to gather that kind of information is not changing over the hatching period.”

Studying an embryo’s response to vibrations is a bit more complicated. Gelatinous egg masses are shaky to begin with, and lots of things—both dangerous and benign—can disturb a clutch.

Warkentin’s earlier research focused on two such disturbances: snake attacks and rainstorms. By recording the vibrations and then playing them back to the embryos, she found that red-eyed treefrog embryos will hatch early in response to shaking by a snake taking a bite at the clutch, but not to the vibrations of raindrops pelting the eggs. 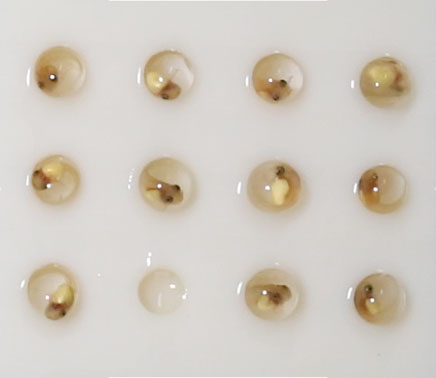 Red-eyed treefrog embryos in a shakeable egg box—one of the devices Warkentin and McDaniel designed to test how embryos respond to vibrations. The missing one has hatched.

Working with Greg McDaniel, a BU College of Engineering (ENG) associate professor of mechanical engineering, to develop and refine the vibration playback system, Warkentin discovered that the embryos are responding to the vibrational patterns and frequencies of each disturbance. “The more different features of the vibration they pay attention to simultaneously, the more it will reduce their risk of mistakes,” she says.

That’s important, because mistakes—deciding to remain in the egg during a snake attack or to hatch early because of a storm—can be costly. Preemies often die at higher rates; for one thing, they are poor swimmers and less able to escape from aquatic predators. “Clearly, there are costs and risks involved with hatching early,” Warkentin says, “but if you’re going to die in the egg, you might as well take your chances in the pond.”

With the new grant, she hopes to answer more questions about how and why embryo behavior changes during development. “We know they get more ‘hatchy’—more likely or prone to hatch—with development, but how exactly does that pattern play out?” she says. “Is the increased response only to certain kinds of stimuli, or is it very general? Does their discrimination of cues change, or their willingness to sample vibrations to get better information, which could be risky?”

Other questions have to do with the frogs’ sensory system development. Red-eyed treefrogs are able to hatch in response to flooding before they they are able to hatch in response to predator attacks. Warkentin hypothesizes that the frogs feel the vibrations using mechanoreceptors in their inner ears. “Our idea is that the snake- and wasp-induced hatching depends on this mechanosensory system,” she says, “and that it’s coming online later than the oxygen-sensing system.” 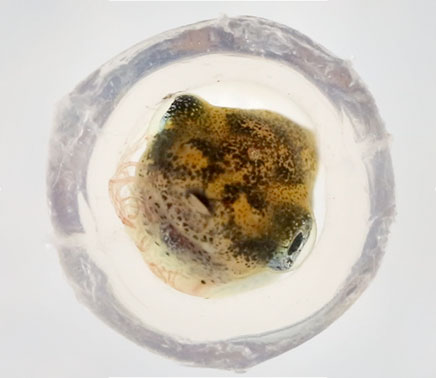 A newly hatched red-eyed treefrog tadpole inside the tube in the tadpole rotator, rolling its eyes opposite to the rotation of its body.

To test her hypothesis, she worked with McDaniel and an ENG undergraduate in spring 2014 to build a tadpole rotator, a mechanical device fitted with a tube about the size of a plastic coffee stirrer. She places a newly hatched red­-eyed treefrog tadpole inside the tube, along with some water, rotates the tube in increments of 15 degrees, and photographs the tadpole each time.

Warkentin, along with Sonia Pérez Arias (CAS’15), a biology student in BU’s faculty-mentored Undergraduate Research Opportunities Program (UROP), put the rotator to work in summer 2014 in Panama. The results so far show that at the beginning—when the frogs are hatching in flooding but not escaping from snakes—they don’t roll their eyes. Warkentin’s hypothesis: the frogs’ ability to flee from snakes is limited by their sensory development. “This is a work in progress,” she says, “but from Sonia’s UROP project, we see there is a big change in the vestibulo-ocular reflex from three to four to five days. It looks like the change in responsiveness to snake attacks matches up with the changes in the reflex.”

“We’ll test it another way [in summer 2015],” she adds, “comparing four-day clutches, which vary a lot in their escape success. If the hypothesis is correct, both their escape success in attacks and how they respond to playbacks of ‘scary’ vibrations should correlate to the vestibulo-ocular reflex, across clutches.

“This is a critical step in understanding how escape hatching, and embryo decisions, work,” Warkentin says. “The sensory system is how embryos—or any animal—get information about the world. So, I think that these embryos are—during the period of time when they are able to hatch but are usually still in the egg—basically gaining a whole new sensory modality, a new channel of information flow. We’re not talking about airborne sound, so ‘hearing’ is not quite right. But it’s like initially they’re deaf, and then suddenly at some point they’re able to hear. Perceptually, it’s a different world, and they can be aware of a whole realm of things they could not sense before. Then they can make decisions or show behavioral responses based on that new stream of information.

“I think it’s going to be fascinating,” Warkentin says. “It will be so much fun to test these ideas.”

There are 3 comments on Escape Hatch