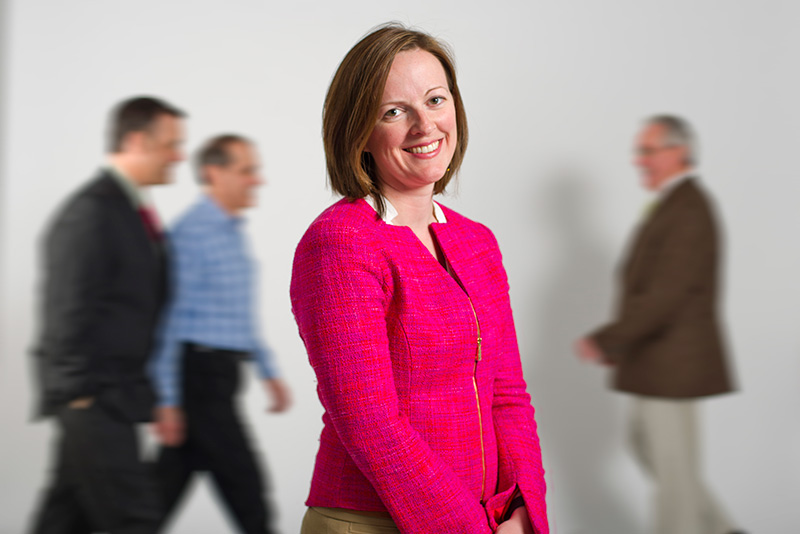 Erin Reid, an assistant professor of organizational behavior at Boston University’s Questrom School of Business, studied men at an elite consulting firm—and people are fascinated by what she learned. Photo by Cydney Scott

BU Research: Why do you think your study has struck such a chord?

Reid: A lot of people feel like they have to work all the time or that they are expected to work all the time. And yet at the same time, we all talk about the need for work/family/life balance. There’s a problem with this culture of overwork. It’s not always necessary for performance. It’s not just mothers who have trouble with this culture. It’s fathers, too, and people who don’t have children.

You earned your PhD in sociology from Harvard University, studying at both their business school and department of sociology. How did you get interested in men and the workplace?

In graduate school, I was interested in gender inequality. Why are there fewer women in position of power? Gradually I realized that there was all this research on women and the workplace, but there was almost nothing about men’s experiences. We say that a lot of the reasons women don’t get ahead is that they don’t have stay-at-home husbands. But most men don’t have stay-at-home wives, either. Something like 70 percent of American married couples are dual earners. I thought about the men I knew who didn’t have stay-at-home wives. They cared about their kids, too. I came to believe that if you want to understand gender, you have to understand men as well as women.

How did you come to study this consulting firm?

This particular company decided they had a gender problem. They thought they weren’t retaining women at the same rate as men. That’s not unusual with these consulting firms. The company approached my dissertation advisor at the Harvard Business School and asked if she would be interested in coming in and looking at what was going on with women at the firm. She said she had a PhD student who was interested in studying men. They said, ‘We care about men, too.’ So they invited me in.

Were you surprised by what you discovered about how men and women handled the demands of the firm?

Yes, I didn’t go in there thinking that men were going to be passing. I wasn’t surprised to find that men had trouble with the firm’s demands. There were men who described themselves to me as Superman. They were proud of it. That was the culture.

There were some women like that, too. One woman said to me, ‘I’m so tired of talking about work/life balance. I love to work.’ She was in her late 20s. She worked from 7 a.m. to 9 p.m. She was super happy. But she did tell me that she was getting married the next summer and that she expected things would change for her after that.

A lot of what you describe sounds awful. Why did people put up with it? Was it all about the money?

People come out of business school with big loans. They go into investment banking and consulting. People talk about escaping from banking to consulting. Some people talked about the status. Some really loved their clients. They found their projects meaningful. But one man told me he felt like he was an agent of the Seven Deadly Sins. He was a partner. He said, ‘I sell beer to people in South America. I make women feel ugly so they’ll buy more makeup.’ He was looking for another job.

Were there gender differences in how men and women felt about their jobs?

About half the men were happy to be “ideal workers,” and about half the women were. What was really different was how they coped. Women involved the firm. They asked to work less hours. The firm would tell them, ‘When you have kids, we’ll make accommodations for you.’ So women just took them at their word. Women did what they were supposed to do and they made less money and got fewer promotions. Men who did that also faced a stigma and got off the promotion track.

What about the senior manager who told you he was managing his work so he could ski five days a week when the opportunity arose and still be there for his son, and his clients?

He thought the firm was sort of cultish. He didn’t fit, but he made it work. He said, ‘I can kind of do what I want.’ He did his job well. Clients liked him. We have this myth that you need to be chained to your desk to succeed. He would have been fired if he’d formalized what he was doing.

In your study, you write about how the firm enforced its expectations for total commitment and availability to clients through things like performance reviews.

In performance reviews, the firm made it clear over and over that what they valued was commitment and availability. One guy told me about this stretch where every night they were meeting at the firm from 2 a.m. to 4 a.m. He told me about a guy who was supposed to come in the next morning by 8 a.m. He was half an hour late. He got a poor evaluation.

People at the firm seemed to really want to talk to you.

I felt like a therapist. People would say, ‘I’m so glad you’re talking about this.’ They genuinely cared about all these issues.

What were your recommendations to the firm?

They wanted to retain women. We told them, ‘Men have the same problems as women. Men are complaining about work/life conflicts at the same rate as women.’ We said, ‘Maybe you don’t have a gender problem, maybe you have a work problem.’

How Some Men in Business “Pass” as Ideal Workers