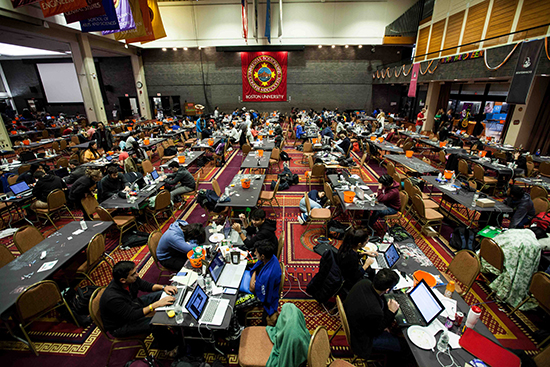 Dr. Frankenstein had nothing on ScareBear.

The movies’ mad genius took something unappetizing—bits and pieces of bodies—and stitched them into an equally unattractive monster. By contrast, ScareBear’s BU student inventors started with an adorable teddy bear and, through the magic of computer science, transformed it into a furry fiend, its eyes flashing demonic red while it growled, “I’ve got something for you,” in ghoulish tones.

But while Frankenstein labored in solitude, ScareBear was born amid 500 student hackers who packed Metcalf Hall for BU’s Halloween weekend hackathon. While competitors worked on their own projects—an app to summon a ride home if you were too drunk to drive, an online stick figure aping the gestures of a person standing before a motion detector—ScareBear’s four BU creators disemboweled their teddy to install hardware, plucked its brown glass eyes to place red lights underneath, and designed the app putting the scare in ScareBear.

“OK, so it smells a little bit,” shrugged Nicholas Maresco (ENG’17), after hot glue spilled on wiring, exuding a burning stink. “Only you can prevent forest fires,” quipped teammate Brian Tan (ENG’16), pushing the bear motif. Later, Maresco confessed, “That’s our second Raspberry Pi. We fried the first one.” He wasn’t talking about lunch. Raspberry Pi is a credit-card sized computer, and the team needed one to communicate with the creature-controlling app.

The project punctuated what the BU organizers called a “Hacky Halloween,” the University’s third annual computer competition. This year’s event outdrew the previous two, with even two busloads of Canadian participants coming in.

The hackathon stretched from Saturday afternoon to Sunday afternoon, when the hackers hunched over their laptops like medieval monks transcribing scripture, racing to complete their projects. (Those who were conscious, that is. Several heads slumped on the tables, napping after little or no sleep overnight. One table had an inflatable mattress on standby on the floor.)

“Sleep isn’t a huge concern,” said Sean Smith (CAS’17), one of the event organizers. “It’s kind of the culture. You get together and you have 24 hours and the time pressure and adrenaline of working with other people, and having this deadline makes you get a lot done.”

Hackathons, which have sprouted on many campuses in the last decade, offer computer enthusiasts opportunities they can’t always get in classes. “It’s really intense, but when you have an idea, it’s fun to go and really knock it out,” said Ben Lawson (CAS’17), whose team project was to use texting, rather than the internet, to code a computer. Lawson pointed out that the event’s corporate sponsors are often a good bet for internship and job possibilities.

“Hackathon” may be a bit of a misnomer, evoking for nontechies an image of information thievery. But “the connotation of the term is changing a lot,” said Smith. “Facebook and Mark Zuckerberg really have championed this term of hacking as a collaborative way of coding quickly. And really, what it means is taking all these tools that you have available and figuring out how to put them together well. Whole companies are built doing the things that people are doing at hackathons.”

Indeed, several major corporations, among them Microsoft, Liberty Mutual, and Capital One, sponsored the hackathon. With some additional funding from BU, the companies covered a budget of about $100,000, including meals and a $12,500 rented generator to power all those computers whose batteries died during the marathon competition. The event was organized by the student group MakeBU, which organizes weekly hack nights on campus and hackathons at BU and elsewhere, along with BUILDS, another student hacking group, and it was sanctioned by Major League Hacking, the NFL of competitive student coding.

Teams came up with their own projects, which were evaluated by 15 judges, mostly from the technology industry. Completing a project was less important than the quality and feasibility of the idea. “If you didn’t finish a project,” Smith said, “but you have this awesome idea and you can show some functionality, then you could probably be a strong contender. Things that are easy, things that have been done before, are generally not going to do that well in the judging.”

The top prize went to a team from Purdue, Carnegie Mellon, and New York University, which built an app that breached the telephone/internet barrier, enabling a telephone caller to converse with a search engine, Bing, and find medical advice. The advice was converted from text to speech and relayed back to the user over the phone.

Neither ScareBear nor any BU team walked away with prizes for top projects, but for the organizers, winning wasn’t the point. “We want it to be fun and collaborative,” said Smith. “We don’t want it to be competitive or cutthroat. We want people to work together and meet new people and learn new things and maybe have something that they can put on their résumé.”

As ScareBear cocreator Doug Roeper (ENG’17) put it, “It’s like, whatever we want, we can implement, whether it works or not. We could try.”

There are 2 comments on BU Hackathon Draws 500