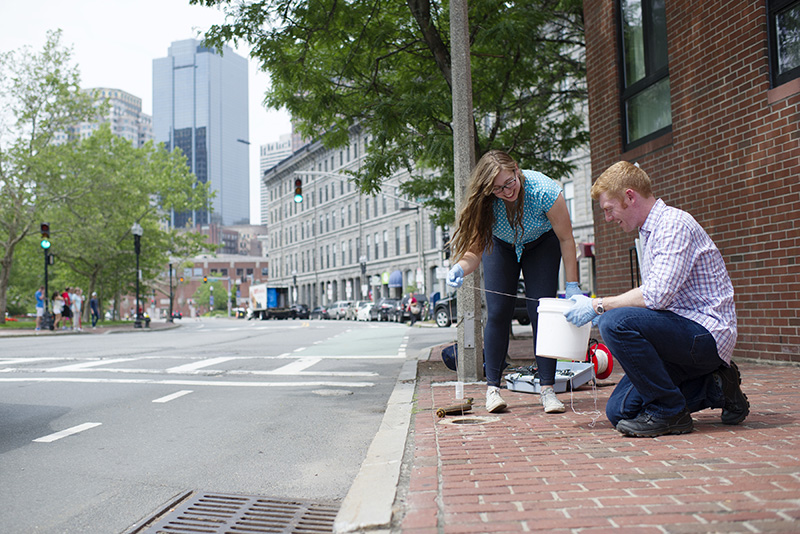 Tim Maguire (GRS’18) and Emelia Chamberlain (CAS’18) are among the BU researchers analyzing the composition of groundwater samples. Photo by Jackie Ricciardi

More than one passerby gawks at the three Boston University students who appear to be ice fishing—in June, in the middle of a Boston sidewalk.

At an intersection on Beacon Street near the Arthur Fiedler Footbridge, Tim Maguire (GRS’18) and two student interns take turns lowering a white plastic tube on a length of string into a two-inch-wide hole in the pavement. About 24 feet below, tube meets groundwater, which the students haul to the surface and pour into small vials. This is the easy part; the hard part is spending a half hour repetitively lowering and hoisting the pipe to remove two gallons of stagnant surface water so that they can tap fresher samples beneath for the lab.

So far, quips Emelia Chamberlain (CAS’18), one of Maguire’s helpers, the drone-like repetition “has not been too bad, but give us a couple of weeks.” Maguire suggests that they look on the bright side: “There’s always people-watching” on a busy sidewalk. Indeed, they get the crack about ice fishing a lot from curious pedestrians over the summer’s twice-a-week collections from 18 downtown wells owned by the Boston Groundwater Trust, which monitors the city’s aquifers.

The groundwater research intrigues him in part because “it’s science literally under your feet,” but mainly because it’s important: Maguire, a doctoral candidate in biology, is studying the ingredients in Boston’s groundwater, which are important pillars of the nearby ocean ecology. They are also a hedge against climate change, and his work might shed light on whether they’ll continue that role as a warming planet raises sea levels that will flood beneath our feet.

Maguire grew up outside Boston and has become a walking textbook of its development history. He also knows a lot about water. His red hair, sideburns, and broad torso evoke a sailor, which he used to be when he lived on board ships and worked as an environmental compliance officer for cruise lines. “Eventually, the time came that I wanted a house that didn’t float away if I stayed a little too late for pizza,” he says, so he returned to Beantown as a consultant on pollution cleanup, which is where he learned the importance of groundwater.

“If we were sitting here in 1800,” he says in a room in the Biology Research Building on Cummington Mall, “this would be oceanfront property.”

Boston, Maguire explains, was built on a variety of fills. Rubbish and ash undergird the TD Garden, while Faneuil Hall perches atop pilings and the scavenged remains of old ships. The Commonwealth Avenue area was built on yet another type of fill: gravel. His research aims to measure nutrient levels, primarily silica, in Boston’s groundwater to find out if the different kinds of fill are affecting the levels of silica, a key nutrient for diatoms, the microscopic, photosynthetic life that help support the ocean’s food webs. “You can think of diatoms as the grass of the sea,” says Maguire. “Without them, we wouldn’t enjoy the socially and economically important fisheries in New England waters.” He hopes to learn how the age and composition of the fill and the prefill land type alter the availability of silica (plus nitrogen and phosphorous) underground—and how much of these nutrients are ending up in Boston Harbor.

The relationship between silica and diatoms has another vital role: it can affect the climate. Diatoms snag carbon dioxide, a greenhouse gas, out of the atmosphere and turn it into organic matter. When they die, the diatoms and their silica shells sink into the deep ocean, taking that organic matter with them and lowering atmospheric carbon dioxide concentrations.

Maguire will use computer models to forecast how the rising sea level caused by climate change might interact with the various fill materials propping up Boston, and how that interaction might affect the harbor. “As sea level rises,” he explains, “the salty water is going to push—underground, mind you—is going to push inland as well. And maybe it pushes inland into a fill patch that adds more silica, or maybe it’s pushing inland into patches that add less silica. We don’t know.”

Preliminary results confirm differences in groundwater silica patterns in different sections of the city, but it’s too early to say how groundwater silica concentrations have altered the ecology of Boston Harbor, and how future changes in sea level will affect the pathway of silica from land to sea. “The unknown is still that this patchwork of sediment and fill that’s underneath Boston is imparting a signal into the groundwater,” he says. “How is what we’ve put underneath the city affecting groundwater? We’ve packed all these things down and thrown the city on top.”

Many people may think of Arctic snowmelt or woods warmed by increasingly early springs as the front lines of climate change. But Maguire knows that cities contribute three-quarters of the world’s human-made greenhouse gases, and that the globe is urbanizing, including near rising seas. He suspects that his findings may be applicable “throughout the East Coast colonial cities and beyond.”

Maguire, whose research is done through the lab of Robinson Fulweiler, a BU College of Arts & Sciences (CAS) associate professor of biology and of earth and environment, has funding from the Boston Athenaeum and a summer 2015 Warren-McLeod Fellowship from the University.

After collecting groundwater all summer, he’ll spend fall poring over the athenaeum’s historical clues for what Boston looked like, and was filled with, in decades past.

Science under Our Feet