In the middle of an interview about how much fun they were having on their spring break trip, biology students Rose Zandvliet and Chris Addis paused in Florida’s Bird Rookery Swamp, peering warily at the reflective eyes of a well-known inhabitant of the Florida swamp—an 11-foot-long adult American alligator, swimming only a few feet away.

Remembering what they had learned about amphibians and reptiles in this semester’s herpetology class, Zandvliet (CAS’15) and Addis (CAS’14) remained calm (unlike the BU Today crew). While it’s true that alligators can outrun most of their prey, like turtles and raccoons, over short distances and that their powerful tails enable them to leap five feet above the water’s surface, the human investigators figured they were a comfortable distance from danger. As the gator lumbered slowly up a bank, they silently motioned to the rest of their class, who had wandered further down the trail.

Christopher Schneider, a College of Arts & Sciences associate professor of biology, was one of the first to arrive. Beside him, fellow teacher Karen Warkentin, also a CAS associate professor of biology, urged the 14 students to maintain a safe distance, and also not to approach the animal in a clump, so that if they needed to move quickly, they wouldn’t be blocked by other people.

Ever hear the saying, “You only need to run faster than the slowest person”?

Prior to this semester, herpetology was the one component of vertebrate organismal biology that was missing from the biology department’s curriculum (ichthyology, the study of fish, mammology, the study of mammals, and ornithology, the study of birds, have all been offered). Amphibian expert Warkentin and Schneider, who studies reptiles, worked together to design and teach the course.

The professors agreed that a field component was integral to the class, and they looked for one with a high likelihood of spotting animals. Only a three-hour plane ride away, Florida has a wide diversity of such animals as American crocodiles, chameleons (one of the state’s many nonnative species), Florida sand skinks, and oak toads. The swamps of Florida are also home to many unusual birds and insects.

“In the lab, students can see specimens and a few live animals, but if you want to understand ecology and animals, it should happen in a natural environment,” Warkentin said. “Outside, it’s a whole sensory experience—seeing, hearing, smelling, getting bitten by insects, getting wet and muddy. Nothing can compare to seeing an animal in its actual environment. There’s no replacement for that.”

Over the course of the weeklong trip, the class traveled to more than six ecological sites in the mid-to-south Florida area—all the way down to the Everglades—looking for specimens and observing them in their natural habitat. They were met in fields and swamps by working biologists who shared their research, and they spent sultry afternoons swimming in a lake formed by a sinkhole and sticky evenings searching for frogs. By trip’s end, the group had seen adult and baby alligators, American crocodiles, Southern black racer snakes, green anoles, banded water snakes, green tree frogs, several species of birds, and manatees. The excursion went so well that the professors plan to organize another trip in 2016, the next time the course will be offered.

Before leaving for Florida, Warkentin, Schneider, and grad assistant Kristina Cohen (GRS’14) prepped students on how to behave in the field (remember to look for snakes before stepping over a log), how to handle animals (if a frog is sitting in your hand, grasp its limb to prevent it from jumping off), and how to take field notes. For some students, it was their first time in the field, while others had already been through the biology department’s Tropical Ecology Program in Ecuador or the BU Marine Program (BUMP), which includes fieldwork in Belize.

Home base for the week was Archbold Biological Station, a 5,193-acre nature sanctuary two hours southeast of Tampa. Biologists are drawn to Archbold Station by its 50 species of reptiles and 23 types of amphibians, and also by a comfortable community of dorms, research labs, and libraries.

On Tuesday, fieldwork started later than usual—a leisurely 9 a.m. meeting time replaced the 6:30 a.m. roll call of other days. Schneider and Warkentin arranged for a private lecture with Archbold assistant research biologist Betsie Rothermel, an expert on the station’s population of gopher tortoises. The tortoises dig up to 50-foot-long burrows in the Florida scrub that they eventually share with just about anything that shows up, from frogs to burrowing owls, earning them the nickname “nature’s landlords.”

Rothermel stood in the hot morning sun beside a tortoise burrow, unraveling a long camera scope that would give students a better look at the subterranean occupants. As she was explaining how conservationists went about creating a management plan for the animal (they used to be buried alive during construction projects), she stopped suddenly, dropped to her stomach, and thrust her hands two feet into the pit. After struggling for a minute, she hauled out a gopher tortoise with both hands and held it in her lap for the students to observe.

“Nothing can compare to seeing an animal in its actual environment. There’s no replacement for that.”—Karen Warkentin, CAS associate professor of biology

Many of Archbold’s tortoises have been marked by conservationists, an identification project that started in 1967. Today’s exhibit had number 1456 painted on its green and brown shell. In addition to the paint, tortoise shells are notched in identifying patterns, which scientists consider a more reliable way to keep tabs on animals that can live for 100 years.

“We look for signs of upper respiratory problems,” said Rothermal, holding the tortoise. “We look for any nasal discharge or chronic infections, which would leave scarring around the nostrils, but she seems very healthy. We also look for tortoise ticks in the soft tissue near the hind legs.” Schneider and a student helped her measure and record the surface temperature of the tortoise’s shell: 28.8 degrees Celsius, or about 84 degrees Fahrenheit.

The rest of the afternoon, students paired off and sat dutifully outside tortoise burrows, waiting for one to emerge. Few did. 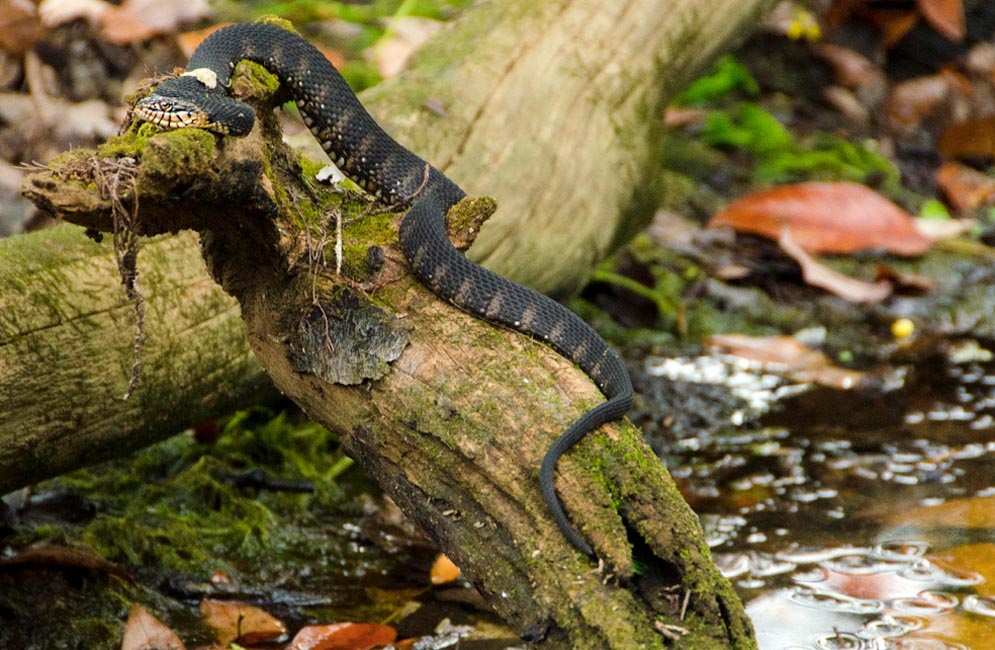 A banded water snake takes a break on a log. Photo by Winnie Hsieh (CAS’14)

The next morning, the group drove two hours to Bird Rookery Swamp, outside Naples, a nature preserve that plays a key role in maintaining the water levels of the greater Corkscrew Regional Ecosystem Watershed (where the students had traveled earlier in the day). The swamp is a forested wetland laced with trails that were originally cut 60 years ago as temporary railroad beds for cypress loggers.

Despite the 81-degree weather, the students wore long sleeves and big floppy hats. They tucked their pants into socks and hiking boots and applied copious amounts of sunscreen. Such precautions, they were told, are necessary to ward off insect bites and sunburn.

The class had stopped not far from the large male alligator to observe a great egret, when snake fancier David Goldstein (CAS’15) spotted a cottonmouth—a type of venomous pit viper—lying quietly under a fern.

As hard as it is for a group of college students to stay quiet, the class managed to remain nearly motionless and observe the cottonmouth, which was probably waiting for a mouse to happen by. Stealthily, Schneider reached in his backpack for long tongs and a clear plastic tube, then he quietly urged students to back away.

“Come here, buddy,” he said, as he gently grasped the snake around its body with his tongs and lifted it into the center of the trail. Holding the plastic tube in one hand, Schneider coaxed the snake headfirst into the tube. Then he dropped the tongs and held the snake’s body with one hand while supporting the rest of the snake with the other.

“This is a beautiful cottonmouth,” he said. “It’s absolutely gorgeous.” Then he offered a bit of unusual advice: “When choosing a tube to feed a snake into, you want to choose a tube that’s only a little bit bigger than its head, because you don’t want it to be able to turn around inside the tube. When they are safely in the tube like this, you can handle them, you can see if there’s a food item in the stomach, which I don’t feel with this snake.”

Schneider explained that cottonmouths are more easily handled than some other snakes. “It’s not a superfast snake,” he said.

“They have infrared photoreceptors in front of their eyes,” said Andrew Hoadley (GRS’15), taking his turn to touch the snake, adding that they use infrared sensing pit organs to detect warm-blooded prey.

While Schneider held the snake, Aubree Woods (CAS’14) used a tape measure to determine the snake was 40 inches long. Schneider then gently placed the snake in a sheltered area off the side of the path. 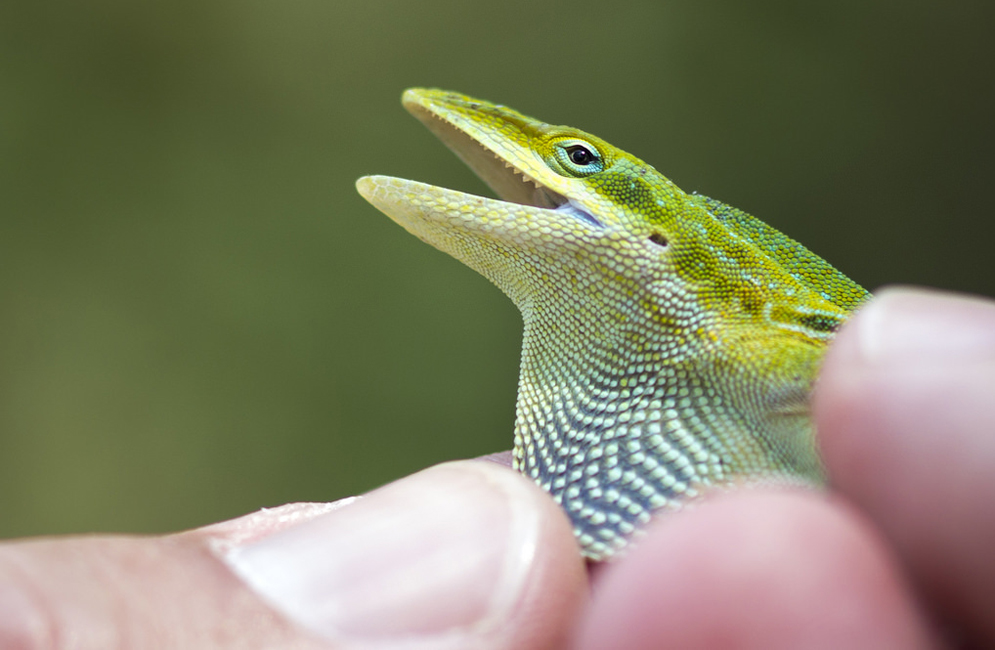 A green anole up close. Photo by Jonathan Suh (CAS’14)

The group spent much of the day with eyes peeled for green anole lizards, which interest herpetologists largely because of the color differences seen in their dewlaps, the extendable flap of skin underneath their necks used for signaling to other anoles. Dewlap color varies among species, and researchers are trying to figure out if dewlap color variation among populations of green anoles means that the animals are on their way to becoming separate species.

Many of the students hoped to capture a lizard with a noose handmade with dental floss, which can be looped around an anole’s neck. Earlier in the trip, students taught each other how to skillfully attach dental floss to a 10-foot-long fishing pole. Excited shrieks could be heard and iPhones were whipped out each time a student succeeded.

By the time the week ended, few creatures had been caught, but many had been spotted and many lessons learned, chief among them how to see an animal that nature has tried to make invisible.

“You can explain to someone how to do it,” said Warkentin. “But when you are really physically trying to do it, you realize it’s a real skill. At first it was hard for students to notice things in the swamp, but as the week went on they became more observant. They developed their eye by searching for animals, in different habitats and under different conditions, and as they accumulated successes—experience—finding things, their ability improved. They learned where to look and how to look.”

There is 1 comment on Teachable Moments in Gator Country